In July of 2014, shortly after ISIS swept into the Iraqi city of Mosul, Emma Sky started getting messages from people in the Pentagon and journalists who wanted to understand this sudden, ominous development in northern Iraq.

Sky had just finished writing her memoir, The Unraveling, about her years as a political adviser to senior U.S. military commanders in Iraq. She was on vacation -- "trying to cut off from the world" -- in Kyrgyzstan.

"I found a shepherd with horses," she tells me, "and went off riding with him through the beautiful mountains." The shepherd had wi-fi. Sky got the messages about ISIS.

She left quickly for the northern Iraqi city of Erbil, Kurdish-controlled territory in a region where she had served, in effect, as the Coalition Provisional Authority's civilian governor after the U.S. military began its occupation of Iraq.

It will become clear why people of influence speed dial Emma Sky about ISIS and the region if you listen to our discussion on Wavemaker Conversations: A Podcast for the Insanely Curious.

Emma Sky is a British woman from a broken family. She spent the ages of 11 through 13 as the only girl in what she calls a "Lord of the Flies" boarding school.

The boys "hated having a girl in the school. They thought the girl ... was going to pollute their school."

The boys bullied her. How did she respond? "I just had to become as tough as they were."

After high school she spent a year living on an Israeli kibbutz, an experience she says shaped her as a person.

She studied at Oxford, mastered Hebrew and Arabic, and found her purpose.

"When you're a student, you're always looking for ... your purpose in life. And I decided that my purpose was to try and help bring about peace in the Middle East."

In 2003, after she'd spent some years with an international organization trying to strengthen relations between Palestinians and Israelis, "the British government sent out an email to people asking for volunteers to go to Iraq for three months to administer the country before we handed it back to the Iraqis."

Sky, who had opposed the war in Iraq, answered the call, viewing it as an opportunity for peacemaking. She wound up in the Kurdish-controlled province of Kirkuk.

"Insurgents tried to assassinate me during my first week. They came to the front door of my house in which I was living in downtown Kirkuk and they fired rockets into it."

Sky reported the assassination attempt to the U.S. commander for the province, Colonel Bill Mayville. He came to rely on her for political advice and she came to rely on him and on the 173rd Airborne Brigade for security.

Fast forward to 2007. U.S. General Ray Odierno urged Emma Sky to join him in Iraq as his chief political adviser. 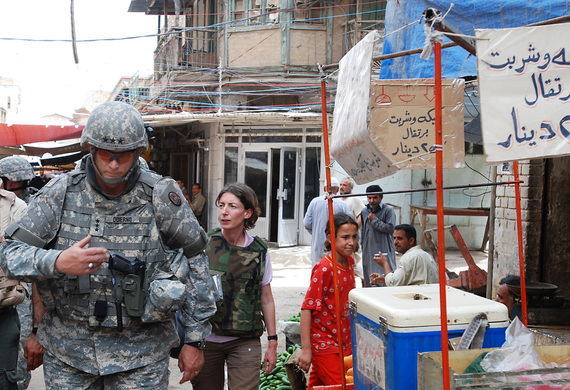 During the surge of U.S. troops that followed, Sky and General Odierno successfully helped build alliances with Sunni insurgents who had previously fought against the U.S. military and who would, with U.S. support, take the lead in defeating Al Qaeda in Iraq.

Which brings us back to where our story began -- the summer of 2014, in the Iraqi city of Erbil, at the Hotel Rotana. Sky encountered a few Sunni tribesmen who told her that they had changed sides and decided to ally themselves with ISIS.

"I looked to them and said, aren't you guys deluded? Haven't you seen what's happening inside Syria? Islamic State will completely take over."

The Islamic State has conquered much territory since that conversation.

What is Emma Sky's advice now?

She tells me we have to think much more about what a post-ISIS world would look like.

"We get very much focused on the day to day fighting against ISIS without really understanding that ISIS is a symptom of much deeper pathologies in the Middle East. And what would that post-ISIS world look like? Because it can't look like a pre-ISIS world. That's what created ISIS."

As for the military dimension:

"The way in which the fighting against ISIS goes is critically important, because it's crucial that local Sunni Arab forces are the ones who defeat ISIS. If it is all foreign forces, if it is Iranian militias, if it is Russia, if it is Assad's forces ... all this does is create more and more grievances that will pave the way for son of ISIS to occur in the future."

This Wavemaker Conversations podcast, featuring the insights and odyssey of Emma Sky, begins to address that urgent question: What can be done to create the conditions for a post-ISIS world -- one which does not pave the way for the son of ISIS?

MICHAEL SCHULDER hosts Wavemaker Conversations: A Podcast for the Insanely Curious, distributed by CBS. You can subscribe for free here on iTunes.