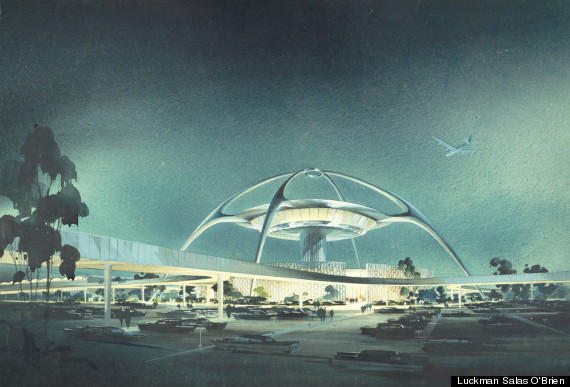 Remember long ago in those dark days of 2011, when "Pacific Standard Time," the Getty-sponsored initiative, got more than 60 cultural organizations throughout Southern California to shine a light on the impact of Los Angeles' art scene between 1945 and 1980? Well, given the success of that first effort, the Getty has now launched "Son of PST" (my name) or, as the Getty calls it, "Pacific Standard Time Presents," a smaller-scale initiative of 11 affiliated shows about "modern architecture in L.A." (visit pacificstandardtimepresents.org for complete details).

For its part, the J. Paul Getty Museum is offering "Overdrive: L.A. Constructs the Future 1940-1990" at the Getty Center through July 21. In truth, Wim de Wit, head of the Department of Architecture and Contemporary Art at the Getty Research Institute, along with curator Christopher Alexander, had been working for several years on this show, but the Getty saw an opportunity to launch the exhibition as part of a larger network of related shows and, in conjunction, to feature programming on the subject at institutions throughout Los Angeles.

The concept may sound a little all over the place, but in truth the show is mostly about buildings, the dreams that inspired them, the plans their builders had for them, what got built as well as what didn't and the influences those buildings wrought -- all meant, in the words of the exhibition's introduction, to "highlight some of the region's most ambitious urban experiments."

Fitting for a show organized by the Research Institute, a library, "Overdrive," is more conceptual and research-driven than a conventional image-centered museum exhibition. As such, it is part of a trend among some art museums to extend the scope of what's shown in their galleries to include popular, historical, social and cultural artifacts. This has been the province of the Museum of Modern Art in New York since its founding in 1929, but otherwise was much more the province of non-art, history and humanities museums, such as the Grammy Museum or even the Autry National Center, but as Bob Dylan put it so long ago, "The times they are a-changin'."

There are nuggets of information to be mined throughout the exhibit. For example, did you know that the Googie-style architecture of the Norm's coffee shops was designed to recall an automobile showroom? Or that LAX called itself "the first airport of the Jet Age"? That the Capitol Records building, the world's first circular building, put its recording studios in the basement for better sound-proofing and features built-in sun shades for its windows; or that the needle on its tower used to broadcast "Hollywood" in Morse code -- and a relative of Samuel Morse was the first person to broadcast that message from its antenna? That the pools of water outside the Department of Water and Power building are recirculated to cool the building, and that originally that building, designed by A.C. Martin and Associates, was meant to be illuminated 24 hours a day? The exhibition abounds with such fascinating minutiae.

The original drawings for Universal City are included, as well showing how it truly was intended to be citylike, including multifamily residential apartments mixed with hotels surrounding an entertainment street. There are even photos of Howard Hughes' Spruce Goose, shown both out in the water and in its hangar. And images of the four-level interchange of freeways -- under construction and completed -- highlight their importance and strange architectural beauty (something now lost on most of us as we curse the traffic). In the section on community engagement, photos show Dodger Stadium being built, as well as the forcible evictions in the former site of Chavez Ravine.

Great film clips are embedded throughout the exhibit, such as one of Edward R. Murrow taking viewers on a tour of CBS' Television City. In a case of saving the best for last, at the tail end of the exhibit, one can sit down and watch a selection of "oral histories" -- produced interviews. These include the late Julius Schulman talking about the growth of Los Angeles, complete with all his much-missed boosterish egocentrism and Frank Gehry explaining how being part of L.A.'s art scene with Wallace Berman, among others, forever influenced his work, and how his childhood study of Talmud sparked his disputatious spirit. David C. Martin talks of three generations of architects in Los Angeles, and in one interview, structural engineer Richard Bradshaw, talking about the construction of LAX, explains that an architect is, literally, as the title implies, the arch technician of a building project, an etymology I had never before considered.

What the Getty exhibition makes clear is that the Los Angeles urban landscape we now take for granted was built building by building. Photos of the Music Center under construction (including the famous Schulman image of the Mark Taper Forum), UCLA's construction boom in the 1960s and the impact of Disneyland on popular culture and theme parks all are here. The show also highlights how houses of worships in Los Angeles, such as the Sidney Eisenshtat-designed Sinai Temple, used, according to the catalog, "sculptural designs and bold forms to impact the streetscape." And how the harmonious design of the First A.M.E. Church in Los Angeles matched the calming effect the church sought for its parishioners in the wake of the Rodney King verdict.

The Getty exhibition hopes to make us really see Los Angeles. "This is a city we all inhabit, we all drive though, we walk though, we live and breathe and eat in this city," Singh said. "And these buildings become intimate in a way, and hopefully with our exhibition, one comes out with a different understanding and an appreciation for the city that we live in and the level of beauty here."

A version of this article appeared in print in The Jewish Journal of Los Angeles.