On Holocaust Remembrance Day, one writer recalls Auschwitz
after watching the acclaimed movie 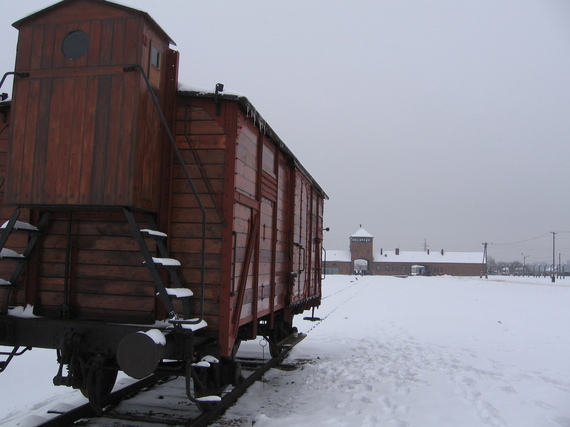 I've been waiting to see Son of Saul for a long time now. It had a limited release in the United States, and because of this, it never came to a theatre in my little town on the prairie. So when it was released on DVD a few days ago, I had it shipped overnight to my house. When it arrived, I finally got to watch it.

I've written extensively about the Holocaust and I've traveled to Germany and Poland many times to visit the sites of industrialized genocide. In fact, in order to get the history correct for my first novel, I did three separate research trips to Treblinka, Sobibór, Bełzec, Majdanek, and Płaszów. I spent over thirty hours in Auschwitz. Reading about these places from a safe academic distance is one thing, but to walk the soil of these camps--to stand before the gas chambers where serial mass murder was committed on a daily basis--that is an entirely different experience. It changes you on a molecular level. You're aware of the ground beneath your feet.

Son of Saul has been applauded by critics everywhere and it recently won both a Golden Globe and an Oscar for "Best Foreign Language Film". Given such praise, I was keen to see how this movie stacked up against what I knew, especially now that Holocaust Remembrance Day is here.

A lifetime of research could be devoted to Auschwitz and it would still remain unknowable. One of the many reasons I appreciate Holocaust Remembrance Day is that it nudges us to remember and ask questions. Most of us know about the trains, the selection process, the changing rooms, and the gas chambers disguised as showers. Son of Saul assumes that a viewer knows such things and it works to tell the story of Auschwitz in a wholly unique way. I have never seen a visual representation of the place quite like this before. And it works extremely well.

The main character is Saul Aüslander and the camera is focused entirely on him throughout much of the film. We both see--and don't see--the camp through his eyes. The scenes behind him are frequently blurry and we only catch glimpses of naked bodies, trucks full of ash, and prisoners snapping to attention in front of SS guards. Conversation is heard in snatches. It's disorienting and confusing.

Saul is part of the Sonderkommando. It's his job to clean out the gas chambers and haul the bodies up to the ovens. The story is simple, compelling, and straightforward. It goes like this: after the gas has been pumped out of one of the showers, he finds a teenage boy who may or may not be his son. Saul sets out to find a rabbi who will bury this child and say Kaddish over his body. Amid the overwhelming and punishing evil of Auschwitz, Saul is determined to have the mourner's prayer said over this boy's unburned body. It is a tall order for a death camp like Auschwitz.

Whether the child is biologically his or not doesn't matter because it represents Saul's yearning for a religion that is under assault. He isn't just trying to save his son; he is trying to save his own faith and culture. Amid all of this, the Sonderkommando are planning to blow Crematorium IV and kill as many SS guards as they can. This rebellion really happened. You can find out more about it here. It took place on October 7, 1944, and although the men and women involved knew it would be a military failure, they nevertheless wanted to slow down the engine of annihilation. They knew they would die. But this might allow others to live.

Saul Fia, as the movie is called in Hungarian, is about many things and it is done with great subtly amid great brutality. Just over the shoulder of the main character is a world that is opaque and hard to see. Saul has trouble understanding all that swirls around him and we, as viewers, get that sense too. Auschwitz is both visible and blurry. This is precisely what I appreciate most about Son of Saul--it is a movie about narration. How do we narrate history? How do we bring the past into focus? Many of the characters risk their lives to document the crimes they're seeing at Auschwitz. One of them keeps a journal he plans to bury in the ground while another character uses a smuggled camera to take photos of burning bodies. Both of these things happened in real life. In fact, here's the photo: 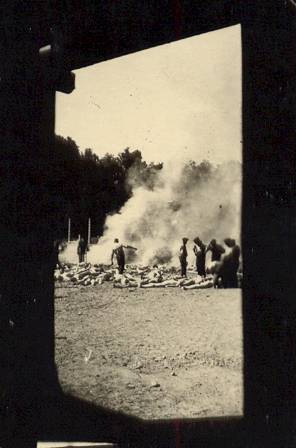 This picture was taken behind Crematorium V and it is one of the few pieces of visual evidence that we have of life inside Auschwitz. The photo is blurry. Out of focus. Tilted. For me, Son of Saul is much like this photograph and I think that's why the movie is so powerful. We see, but we don't see at the same time. Our imaginations have to fill in the gaps.

There is one scene that takes place where all of the suitcases, clothes, enamel pots, eyeglasses, and documents were sorted by teams of women. The Nazis called this section of camp "Canada" because it represented a land of riches. We also see areas of Auschwitz that aren't generally well known--the coal rooms that powered the furnaces for instance. This movie also takes us into the gas chambers and we walk next to the rumbling ovens. Blood is on the gas chamber floor. Water and disinfectant is on the walls. Ash floats through the air. We see naked people being shot at night and burned in a gigantic roaring pit. We see all of this, but it's distorted and over the shoulder of Saul. That which seems un-film-able is on a display right in front of us.

No movie can represent Auschwitz. The place is too big to be contained. I don't mean this just in the sense of "art capturing life" but I also mean it quite literally. Unless you've visited the place, it's nearly impossible to appreciate its vast size. The main camp came into existence in 1940. When that proved too small, another camp, Auschwitz-Birkenau, was built down the road in 1941 and it was here that the gas chambers were housed. Auschwitz III (also known as Monowitz and sometimes Buna) came into operation in 1942. Surrounding these three camps were forty sub-camps. They have forgotten names like Trzebinia, Blechhammer, and Eintrachthütte. So while we refer to Auschwitz as a singular place, it is a plurality. It is a sprawling zone of death that defies imagination. It is beyond knowing--and yet we must try.

On this Yom HaShoah, there are many ways to remember and learn about the Holocaust. I'd recommend reading the memoirs from the real life Sonderkommando. Without Filip Müller's Eyewitness Auschwitz, Shlomo Venezia's Inside the Gas Chambers, and Miklos Nyiszli's Auschwitz, it is doubtful Son of Saul would have been made at all. I'd also recommend Claude Lanzmann's nine-hour documentary, Shoah. It is a landmark of filmmaking that Roger Ebert called "one of the noblest films ever made." (On a side note, it would be wrong to compare Son of Saul with Shoah. They are two very different acts of commemoration in that one has a fictional character caught in a nonfictional place, and the other is a documentary.)

Son of Saul is a visual representation that is unique, chilling, and immediate. After having spent so much time in Auschwitz doing research--and after having written a novel about the Operation Reinhard camps--I found myself watching this movie and feeling as if I saw the Holocaust in a new way. That's the job of the artist. To shed light.

One thing is certain, all across the planet we are losing our eyewitness to the Holocaust. A day will come sometime in the future with a headline that reads, "Last Survivor Dies." I worry about what this will do to our understanding of history. This is why we must listen and record and revisit. On this day of remembrance, I'd recommend watching this movie--yes--of course--it's excellent--but I'd pay close attention to those parts that are blurry. Out of focus. In danger of being lost forever.

Patrick Hicks is the author of ten books, including The Commandant of Lubizec: A Novel of the Holocaust and Operation Reinhard. He is the Writer-in-Residence at Augustana University and a faculty member at the MFA program at Sierra Nevada College. His website is www.patrickhicks.org