Since the La Scala premier of Bellini's Norma on the day after Christmas 1831, the opera has been a gritty challenge for any company to take on -- starting with the soprano (or occasional mezzo) in the title role. Fans of this supreme contender in Bel Canto repertoire understand that no two leading ladies have ever come to the role with the same equipment nor have they employed the same dynamics (or keys), or opted for the same sets of accumulated vocal ornamentation. What the anointed singers and their producers and conductors draw upon are comparable blends of charisma, dramatic fortitude, sparkling High Cs and anything from acceptable to scintillating elasticity in the coloratura department. For such vocal artists, Norma is the ultimate showcase. The goal is to present the singer while she is in her prime. At the moment, that spotlight is on Sondra Radvanovsky -- star of San Francisco Opera's new production of Norma which opened the 2014/15 Season this past Friday night. 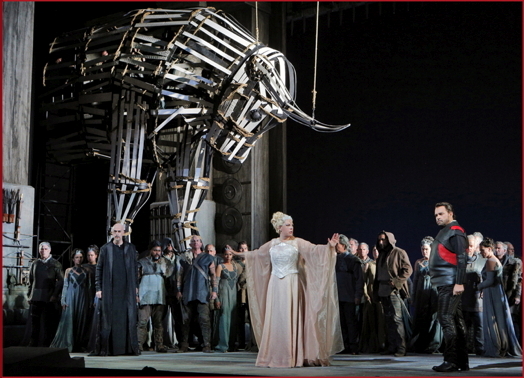 Throughout the evening, Sondra Radvanovsky's performance was measured and consistent. Her rendition of the Act I aria, "Casta Diva" was beautifully delivered, her sudden and sustained transitions from forte to pianissimo flowing easily back and forth and sailing over the orchestra. Torn between her exalted position as High Priestess of the Druids and her frustrated passion for "Pollione" (Marco Berti) the proconsul of the occupying Roman forces -- Radvanovsky commanded the stage and with her powerful and flexible range controlled the Druid rebels, engaged the attention of the Deity, overruled her father and Chief of the Druids, "Oroveso" (Christian Van Horn), spared the lives of her illegitimate children, counseled and consoled her novice temple assistant (and romantic rival), called for war, and -- with great conviction -- took the hand of her Roman lover and headed into the flames. Sondra Radvanovsky is Bellini's Norma. 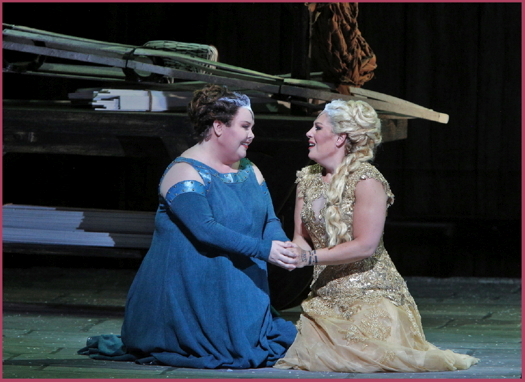 As the virgin priestess, "Adalgisa", mezzo-soprano Jamie Barton was a fine match for Radvanovsky. Having replaced Daveda Karanas and brought into the production less than two weeks ago, Barton's smooth tonality and dynamic lower register was a perfect balance for the close-knit harmonies of the Act II duets, "Mira, o Norma" and "Si fino all'ore estreme". In June 2013, Jamie Barton won both the BBC Cardiff Singer of the World and Song Prize at the renowned international vocal competition. Last season at the Met she sang Adalgisa under the baton of Riccardo Frizza and was paired with Angela Meade. Earlier in the same run, Radvanovsky sang the title role but was paired with Kate Aldrich as Adalgisa. Perhaps it really was divine intervention that brought Sondra and Jamie together to San Francisco Opera and the guidance of conductor Nicola Luisotti. At the curtain call, it appeared that everyone's musical wish list had been fulfilled. 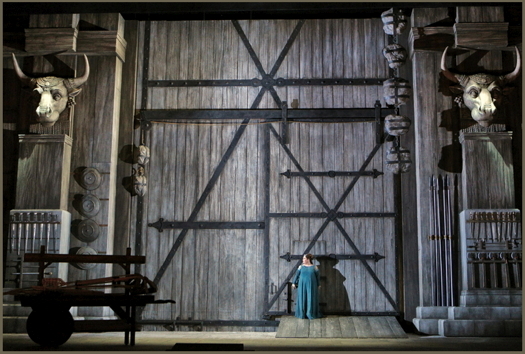 Alas, the production elements are not heaven sent. The set designs of David Korins are clever, but confusing and cluttered. The Kong-size doors, the ready abundance of knives, spears, and scythes, along with an assortment of utility wagons, a roll-away preaching platform, a tiny tot trailer home, and a slow-roasting funeral pyre at the finale keep the eyes very busy and the questions coming. And that's just on this side of the heavily bolted doors. But where exactly are we? The wardrobe by Jessica Jahn is likewise a mishmash of confusion. The Roman proconsul in pleated leather pants and modern shoes next to the (heavily-wigged) High Priestess in apricot chiffon and tons of sequins -- surrounded by all the bovine objets d'art - places this vision of the Druids somewhere between Game of Thrones and re-runs of Green Acres.