I now see more clearly the fearsome predator that is the Chestnut-backed Chickadee. His terrifying manner connects him all the way from falcons recently to eagles earlier, and -- much earlier -- to Tyrannosaurus rex. His terror is subtler than that of T. rex, with a multitude of insects taking on the role of cowering prey once played by Stegosaurus. 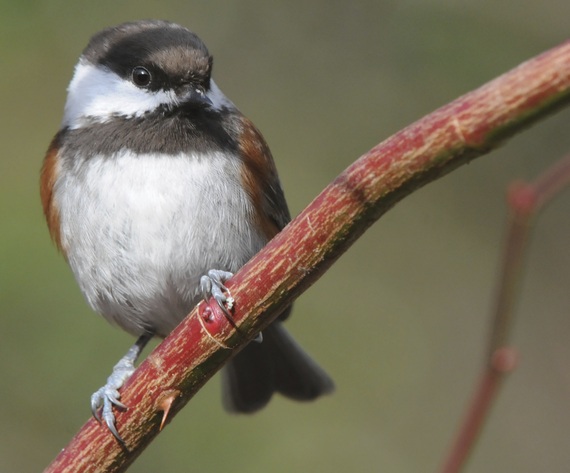 Chestnut-backed Chickadees, like all songbirds, have a long evolutionary history linked to apex predators like hawks, and later, falcons. Photo by Steve Zack ©WCS.

A recent publication by 105(!) authors provides the first whole-genome analysis of key bird families representing all living Orders, and with it a more fully fleshed-out sense of the origins and timing of the evolution of modern birds. The bird family tree, informed by the connectedness of near relatives and distant relations, including previously hard to place groups, is now resolved.

There is much to digest. Here are some highlights:

Birds are dinosaurs, as most (but not all!) scientists agree.

All but the avian line of dinosaurs died out after the Cretaceous-Paleogene mass extinction linked to an asteroid impact some 66 million years ago. Birds, placental mammals, crocodiles, sea turtles, and other groups found great opportunity after this calamity, and exhibited a "Big Bang" diversification of lineages in a relatively short amount of time. New habitats emerged and in the vacuum of the loss of T. rex and kin came smaller and yet more mobile wildlife with feathers and hair.

The seeds of such diversity were sewn before the end Cretaceous.

What were to become modern birds broke off from "Ratites" (represented today by the ostrich, the emu, kiwis, etc.) and tinamous (furtive tropical America birds) fully 100 mya (million years ago). By 88 mya, the common ancestor of both waterfowl (swans, geese, ducks) and fowl (pheasants, turkey, quail) split from the main line of modern birds. Grouse and kin diversified on land, and waterfowl exploited wetlands and rivers. 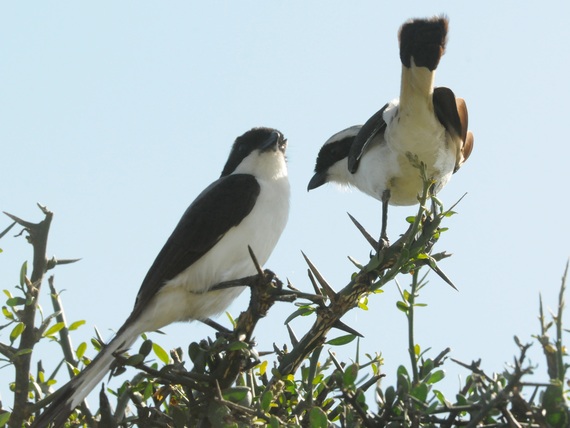 Grey-backed Fiscal Shrikes, like all shrikes, are predatory on small mammals and birds, in addition to insects. I studied the social behavior of this species in Kenya in the 1980s, and photographed these two in Tanzania last year. Photo by Steve Zack ©WCS.

All other living bird groups explosively diversified after the mass extinction.

This suggests how quickly most modern birds (and placental mammals) "filled" the ecological space left by the demise of non-avian dinosaurs. Fully 36 lineages of birds arose within 15 million years after the mass extinction. Pigeons (with flamingos and grebes) then split off from the main group. The larger group then split into another land diversification (including eagles, owls, woodpeckers, and parrots) and a separate fresh and salt water diversification of new water birds (including cranes, loons, penguins, albatross, herons, and pelicans).

Songbirds now comprise the majority -- roughly 60 percent -- of the 10,400 species of living birds. They are part of the massive land diversification, above. At the base of this branch are hawks, and much later (and thus not closely related) are the falcons, just before parrots and songbirds split. This indicates that songbirds are from a line of "apex predators" (predators at the top of the food chain). 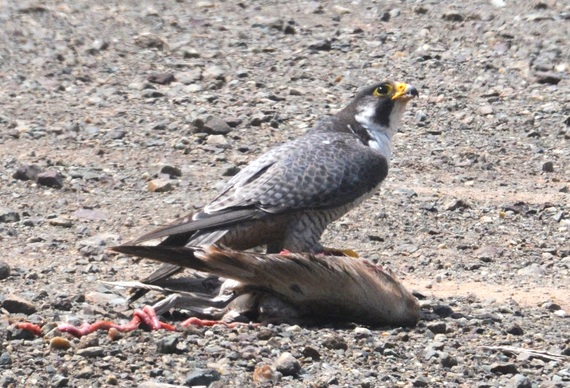 A Peregrine Falcon near the Oregon coast looks skyward for competitors of its prey, an immature gull. Falcons are now recognized as separate from other birds of prey like hawks and eagles, and instead are very closely related to songbirds and parrots. Photo by Steve Zack ©WCS.

I respectfully disagree with my 105 colleagues of this paper who state that the "losses of the predatory phenotype were gradual across successive divergences" leading to songbirds. Instead, I interpret the tremendous diversification of the songbirds today as indeed tied to that age-old predatory phenotype and played out primarily then and now on the diverse world of insects. Think of flycatchers that capture flying insects, nuthatches that find insects on bark, warblers that glean insects off vegetation, and so on.

Previous efforts to create evolutionary trees of birds were hard pressed to find reliable places for some enigmatic living bird groups -- notably the hoatzin and the mousebirds. Hoatzins are, well, small flying cows of South America. They are unique leaf-eating birds that have a specialized crop for foregut fermentation, analogous to cows and deer yet quite unlike any other bird. Their new placement on the avian tree before the highly migratory cranes and shorebirds is amusing, as hoatzin flop more than they fly. 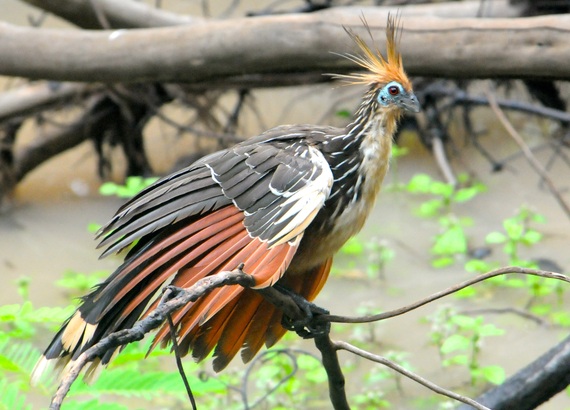 Hoatzins of tropical South America are distinctly different from all other birds as they eat primarily leaves and have a ruminate-like digestive system in their crop. They are very weak in flight, but are ancestors to the quite capable flyers - cranes and shorebirds. Photo by Steve Zack ©WCS.

The six species of mousebird are restricted to Africa. They are drab gray and brown birds, highly social, with long stiff tails. Their name arises from their tendency to scurry through vegetation. They have a curious foot morphology, with reversible outer toes - a feature that vexed placement among other bird groups in the tree. The revised avian tree has them close to owls and ancestral to the line of hornbills, woodpeckers, and relatives.

I am still sorting through this new tree of avian diversity. It affords me a new structure to more fully understand the great diversity of birds of the world, their relatives, and their dramatic multi-million year history. So many of them had their origins in an earth crisis driven by an asteroid. 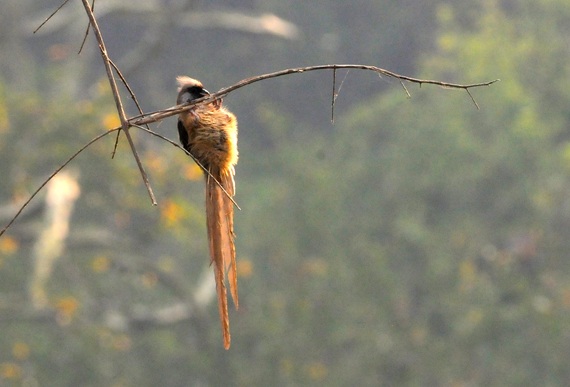 A Speckled Mousebird clings to a branch in Queen Elizabeth National Park, Uganda. The six mousebird species, all in Africa, have long been considered outliers among modern birds with no clear affinities. Photo by Steve Zack ©WCS.

We should better appreciate our avian species and other wildlife diversity around us. We are learning more and more about the origins of our natural world and the interrelationships that collectively provide the essence of life on earth.

Sadly, our growing human footprint is inexorably leading to another great mass extinction. Unlike the one 66 mya, there are not expected to be new wildlife habitats after the coming crisis. Our footprint of concrete, plowed fields, and depleted resources will leave little room for another "Big Bang" diversification. That means there will be no chance for birds or other wild animal groups to once again find opportunity out of calamity.

That is as terrifying to me as the chickadee is to the beetle on the branch.