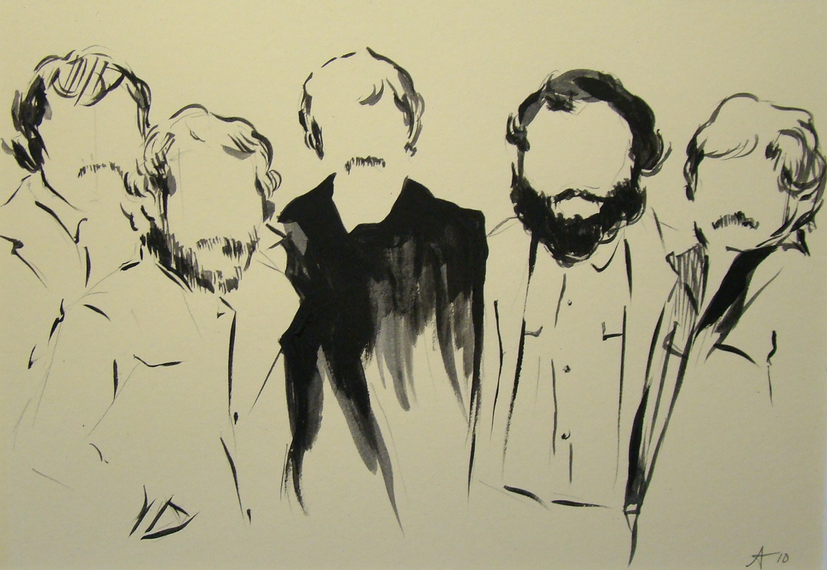 Bearded Men in My Life/The Band, pen drawing by Jacqui Alexander, 2010. Collection of the author.

The Weight (1968)
The Band
Music From Big Pink (Columbia Records)

"The Weight" belies its name by beginning lightly, with the keen tickle of strings, precise yet also casual. You feel like you're on someone's porch, down home, listening to a few folks make music at sundown. Then comes the first big, soft thud from Levon Helm's drums. Levon's drumbeat is the heartbeat of every song by The Band, and never more so than here. The steady, regular bass beat keeps time with your own heart -- or perhaps, as you listen, your heart keeps time with Levon. When that drum commences, the song comes alive.

The lyrics entirely sustain this feeling conjured up by the simple elegance of the music. They're full of the Bible and Stephen C. Foster, spirituals and backwoods story-songs, the Ozark Mountains and Mississippi Delta and Maritimes. The story is simple and sad, like most folk songs. Someone far from home, less a traveler than a wanderer, a refugee, passes through the town of Nazareth, encounters folks in the streets, and keeps on going. Levon's voice leads, but, in the organic way of The Band's best songs, other men's voices follow, and fall into company. What the singer is seeking is entirely basic: "I pulled into Nazareth, was feeling 'bout half past dead. I just need some place where I can lay my head." But there's no rest for the weary in Nazareth. A man he passes grins, and shakes his hand, but just says no.

Whether Nazareth is the original Biblical town, or the place in Pennsylvania known to every musician as the home since 1833 of C. F. Martin & Company, makers of Martin guitars, it's not a good place to be. In the streets are those who bear the names of people Levon Helm knew back home in Arkansas -- Anna Lee, Carmen, Chester -- but they walk through unreality, with strangers and devils around them in the fog. "The Weight's" Nazareth seems to me the next town over from Bob Dylan's "Desolation Row." It's a nightmare-circus place, to be escaped the very next time the phantom Wabash Cannonball, or any train at all, slows down close to town long enough for you to hop a ride.

As the refrain takes off for the first time, the rippling keyboards rise with the words. Richard Manuel and Garth Hudson, on organ and piano, propel the chorus of voices. What's the name of the woman from whom the weary load should be taken? Is it Annie or Fannie? It doesn't matter. When the voices all chime in to volunteer to help, harmonizing on that "put the load, put the load right on me," you know they can bear the weight for anyone.

Denied a place to rest, the tired traveler picks up his bag and goes looking for a place to hide. When you're wanting a hiding place, the last person you'd like to run into is the devil. Alas, Carmen and the devil are right there, walking side by side. The singer knows and addresses Carmen: "Hey Carmen, come on, let's go downtown." She refuses: "I gotta go, but my friend can stick around."

Moses and Luke are other Biblical names, names too that feel like they come from a rural 19th-century America, in "The Weight." "Go Down, Moses" is of course the title of a spiritual about release from slavery: "Go down, Moses, way down in Egypt land. Tell old Pharaoh to let my people go." It's also a collection of stories by William Faulkner. The Band use the line, but add a very important gender-shifting word at the beginning of "The Weight's" third verse: "Go down, Miss Moses." Miss Moses, and Luke -- who bears the name of the best-known chronicler of the birth of Jesus, and who is, like us all, waiting on the Judgement Day -- give way to a real person in the end: young Anna Lee. Levon's old childhood friend Anna Lee Amsden still smiles from his website as the studio's "chef extraordinaire." She made another appearance in a song sung by Helm, a title appearance this time, in the wrenching ballad "Anna Lee," written by Laurelyn Dossett, on the Grammy-award-winning album Dirt Farmer in 2007.

In his 1993 autobiography This Wheel's On Fire, Helm says "'Crazy Chester' was a guy we all knew from Fayetteville who came into town on Saturdays wearing a full set of cap guns on his hips and kinda walked around town to help keep the peace, if you follow me." In "The Weight," Chester offers to fix a rack (gun rack? or maybe it just rhymes with Jack) in exchange for his dog, Jack. The pathos of Chester's request "won't you feed him when you can?" rings out in Rick Danko's unique, uncategorizable voice -- at once rich and tender, with its great range and heartbreaking flutelike tone. No one could ever sing like Levon, and no one could ever sing like Rick, either. That they now lie buried in the same small cemetery in their long-adopted home of Woodstock, New York -- Helm on the rise of the hill, Danko across the little road that runs through the cemetery, and next to his son Eli -- makes this verse of the song an elegy now.

"Catch a cannonball" should be a good thing -- getting on a train to take you out of this town. It feels eerier, though, when you think that the "Wabash Cannonball" is a train that never really was (until a savvy rail operator, in the wake of the song's tremendous success in the hands of Roy Acuff and his Smoky Mountain boys, named a train for the song). And to catch a cannonball would of course have killed you, were you one of the Civil-Wartime men in "The Night They Drove Old Dixie Down." Where is the singer going? "On down the line," "back to Miss Fannie," but he doesn't say "home." It's all prospective, too -- he's sinking, and it's time to get back, but he hasn't left yet. Miss Fannie may be the polite woman with a lot on her, who's remembered to send her regards to everyone, but she is also the one who sent him to Nazareth in the first place. Is the conclusion positive? Negative? Is it a conclusion at all? You hear only the thin, high thread of a voice without words, and the instruments just trail away, leaving you there.

"The Weight" is not folk-rock, nor what Time magazine, in their cover story on The Band in 1970, called "country rock." It is gospel music. Every performance of it I was lucky enough to hear at Helm's home in Woodstock made you feel like you were in church, on a quiet night -- or at a glorious camp meeting, on nights when "the barn" was packed to its strong rafters for a special guest like Mavis Staples. The night she came to the Midnight Ramble, Staples stood radiant between her goddaughter Amy Helm and Levon, pressing both lovely hands to her chest on every "put the load right on me." The performance was transporting. There were funny times, too. One celebrated guest, despite his reading glasses and the lyric sheet in front of him, didn't know the "crazy Chester" verse that the guests were usually given the honor of singing. He flubbed the words, and Larry Campbell, longtime leader of the Levon Helm Band, slid next to him to sing into the mic while everyone in the barn, as usual, sang along. Levon was bent double over the drums, laughing like a little boy -- genuinely tickled to pieces both by someone lousing up, and everyone helping out.

I heard "The Weight" live a hundred times and more, with Helm behind those drums, and never did it sound the same to me. Sometimes I beamed as I sang along; sometimes I wept. Often I did both. When you listen to the song as recorded by The Band at various times, there's no way of telling how "The Weight" will hit you, and what of it will hit you -- the words, the quality of Helm's or Danko's voice on a particular phrase, the high pure harmony of Manuel, the rise and fall of one instrument or another, the gentle controlled pat-on-the-back from the drums. All you do know is that, every time, you feel connected not only to the music but to the people, and the places they lived, that made it, and you're more grateful, every time.

This is the first in a series of essays called "Songs That Matter." What songs matter to you? Please comment or email me. 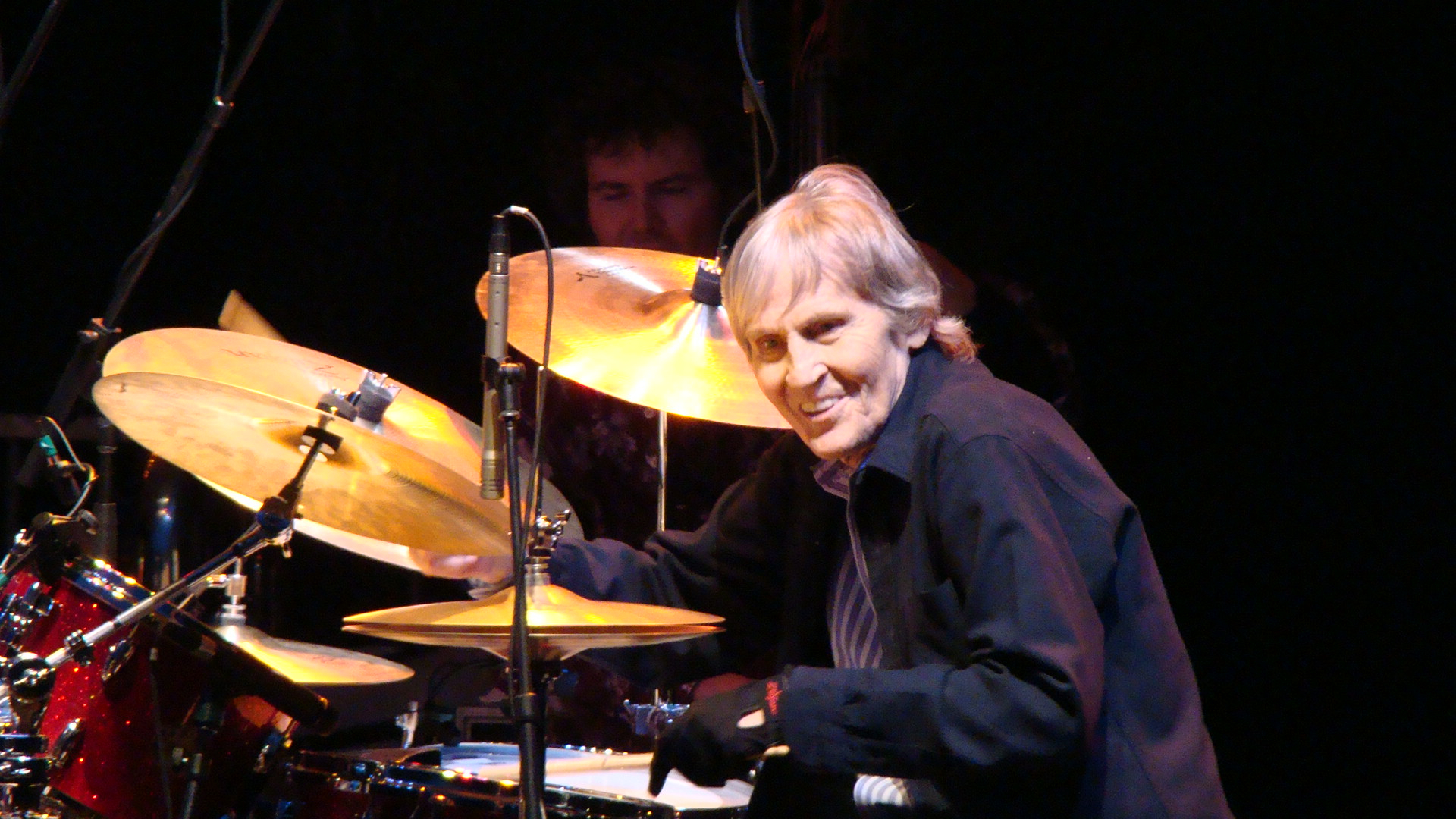