Supreme Court Justice Sonia Sotomayor knows that equality is not a one-size-fits-all concept.

In a conversation with the Aspen Institute Latinos and Society Program published Monday, Sotomayor broke down why it’s wrong to believe that everyone in the United States is functioning on a level playing field.

“There’s a continuing tension in America between the image of the person who pulls themselves up by the bootstraps, and the person who believes that you need a lift to get up sometimes,” Sotomayor told the program’s executive director, Abigail Golden-Vazquez. “Those people who believe that everyone must pull themselves up ― they don’t believe that people are entitled to help.”

“For those of us who understand that sometimes no matter how tall the heel on your boot is, the barrier is so high that you need a small lift to help you get over it ― they will understand that the inequalities in society build that barrier so high,” she continued. “Unless you do something to knock it down or help that person up, they will never have a chance. I had those things. I had a unique mother who was able to understand the benefits of education and encouraged me to use education as my liftoff. But not everyone knows that.”

The Supreme Court justice spoke about the important role that affirmative action had on her own life and career during a panel in the early 1990s, according to CNN.

“I am a product of affirmative action,” she said. “I am the perfect affirmative action baby. I am Puerto Rican, born and raised in the South Bronx. My test scores were not comparable to my colleagues at Princeton and Yale. Not so far off so that I wasn’t able to succeed at those institutions.”

During the chat with the Aspen Institute, which centered on the importance of Latino civic engagement, Sotomayor stressed that not every child has the opportunity to pursue his or her dreams with the same resources.

“How many kids hear that they can’t go to college, that they have to support the family?” she asked. “That comes from a parent whose own life has constricted their understanding of opportunity. So for me, that’s a constant conversation. It’s not an issue about whether someone is willing to lift themselves up. There are so many barriers that we have to bring down before we can change the outcomes.” 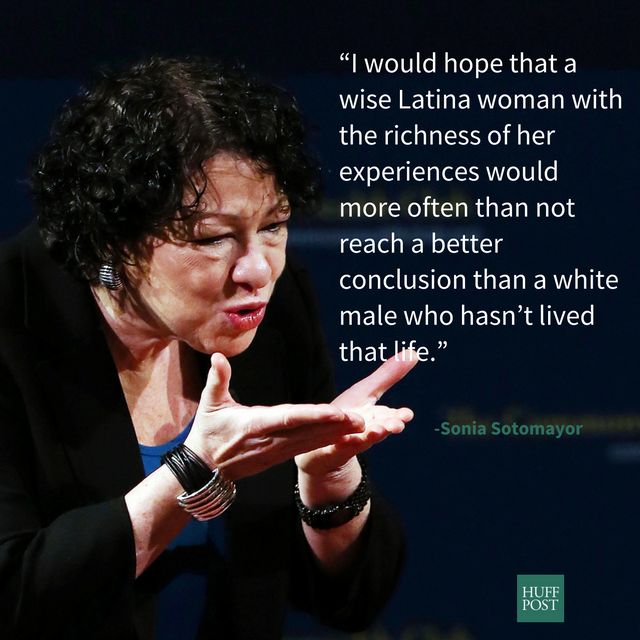 1 / 9
In 2001, Supreme Court Justice Sonia Sotomayor gave her now famous <a href="https://www.huffpost.com/entry/wise-latinas-say-sotomayo_1_n_234282" target="_blank">&ldquo;wise Latina&rdquo;</a>&nbsp;speech, during which she reminded a group of University of California Berkeley law students that their personal experiences would enrich the legal system.
Getty