When Sonic opened his mouth in his new movie trailer, the internet showed its teeth.

Just days after the trailer for “Sonic the Hedgehog” dropped, and the online hoopla caused over the 1990s video game character’s look ensued, director Jeff Fowler announced over Twitter that the character would be redesigned.

Thank you for the support. And the criticism. The message is loud and clear... you aren't happy with the design & you want changes. It's going to happen. Everyone at Paramount & Sega are fully committed to making this character the BEST he can be... #sonicmovie #gottafixfast 🔧✌️

The move was unprecedented.

Never before has there been such a highly visible CGI character redesign due to internet backlash. And thus far, the film is sticking to its November release date.

On Thursday, HuffPost asked actor Ben Schwartz, who voices Sonic, for his response to the online response.

“I was excited that the trailer came out, and then I just take my strides from Paramount, the human beings that helped do this and even allowed me to even play the role. They said we’re gonna retool it, and I said, ‘Really?’ And they go, ‘Yeah,’ and I said, ‘That’s great.’ I’m excited to see what it looks like ... I feel like they’re going to do a good job playing with it a bit.”

The actor added, “I think it’s cool of them even that they are going to retool it maybe because of feedback, maybe advice from everybody, from director and producers ... they believe in the movie.”

Schwartz said it’s really possible because the CGI is added in during post-production. “I think it’s pretty cool,” he said, adding that he hopes the end product will be something Paramount and audiences “could be more excited about.”

Besides talking Sonic, Schwartz also opened up about some of his other projects including voicing BB-8 in “Star Wars: The Force Awakens” as well as a high-end, premium towel jacket that he’s teamed up with Dos Equis to promote.

And if you’re already confused about what that actually is, this interview won’t help very much either.

Hi, Ben. How are you doing?

[Bill Bradley], hall of fame player, a politician, you’ve done it all. The idea that you jumped to HuffPost afterward just to just have this conversation about Dos Equis means the world to me.

People say I do look shorter in person, so I’m glad this is over the phone.

Well, that is classy of you. Classy like this Dos Equis towel jacket that I’ve been told about over email. What is this towel jacket?

[Laughs] By the way, not only was that transition the sexiest transition we’ve had so far, but the idea that you said “this incredible jacket, which I’ve only heard about over email” really sticks the consumer in the place to not trust the thing that I’m about to tell them, but, Bill, I’m going to tell them.

I would love it.

Dos Equis gave me a call and said we have something called summer essentials, which of course, Bill, you and I, we have no idea what that means, and they said we made a jacket made out of a towel. So, Bill, you and I together — why? I said why. They didn’t answer. They say we made it with Bask. I go OK. This sounds great. They say you can get it at DosEquis.com. I said OK. How much does it cost? They say too much, and I said I want to help sell this thing.

So what was it like putting on the jacket?

First of all, let me tell you, when I first saw the jacket it was like. Bill, have you ever been in love before?

Bill, don’t lie to me. Have you ever been in real love before?

Have you heard of Taco Bell?

That’s real love to me.

Well, when I saw this jacket ... so the jacket in this scenario that I’ve just invented, like the invisible man is walking by himself down the street and it starts raining, like really pouring. And I’m like, “You know what I could really use a jacket,” and it came and comforted me, and I’m like, “This is incredible,” and then I realized immediately because of the towel the jacket will be weighed down by water weight, and it was incredibly uncomfortable. You can get this for $250 at DosEquis.com.

I feel like this is very Jean-Ralphio of you. How do you feel you’re keeping that spirit alive with this?

Jean-Ralphio, in my head, as the seasons went turned into a cartoon character … I think you’re right. I think this jacket would live in the Jean-Ralphio universe. Right next to it is a fanny fridge, which you’re like, “Well, what does that mean?” Which is a great question because I don’t know if it’s even been made before. It’s a fanny pack that holds a 6-pack of beer, and you’re like why. And again, I don’t have the answers. I just have the information, Bill Bradley. I know HuffPost is like hard-hitting journalism, and what I’m giving you is information. I can’t get too deep into it.

Well, speaking of cartoon characters, I mean you’re kind of playing one with Sonic. What’s it been like being Sonic?

Sonic has been so exciting to me because I played the video games as a kid. I was a huge video game nerd. I still am and so to play Sonic has just been a dream because imagine playing a property that you’re so into and the fanbase is so into. I have found out the fanbase is very into. And it’s exciting when people really care about something, so you want to bring them the best version of it.

I think the movie is very fun, and I found out the design of Sonic is under construction right now, so they’re going to retool it a little bit. I don’t know what it looks like, but I’m excited to see what they do because the movie is really fun and Jim Carrey is amazing, and I had so much fun voicing the character.

Another character you voiced was BB-8 in “Force Awakens.” I’ve wanted to ask you this for a while, but what was BB-8 actually saying?

Oh my goodness. By the way, it’s so funny because [director J.J. Abrams] and I did write words in a script, and at the very beginning what happened was J.J. called me in and we’d write rough text for the scene, never to be kind of used, but the idea of getting the emotional takes for the character, what he was trying to say, and there were words, but words that we never told anybody. It’s like this big secret what he was really saying. What it was really saying?

But there is footage of me saying real lines of dialogues for a bunch of scenes at the beginning. It was while they were still filming, so I think they have to do stuff really early to get the toys out and stuff like that. But they found out when I was doing the words when it got back from [ the Industrial Light & Magic visual effects company] and all the sound places, it sounded too much like a human being turned into a robot, so they changed it with a synthesizer. I had to film a movie in Atlanta, and then [actor] Bill Hader took over and did an incredible job, and did the same kind of synthesizers. Then I think J.J.  just found like an app on his iPad and figured it out. 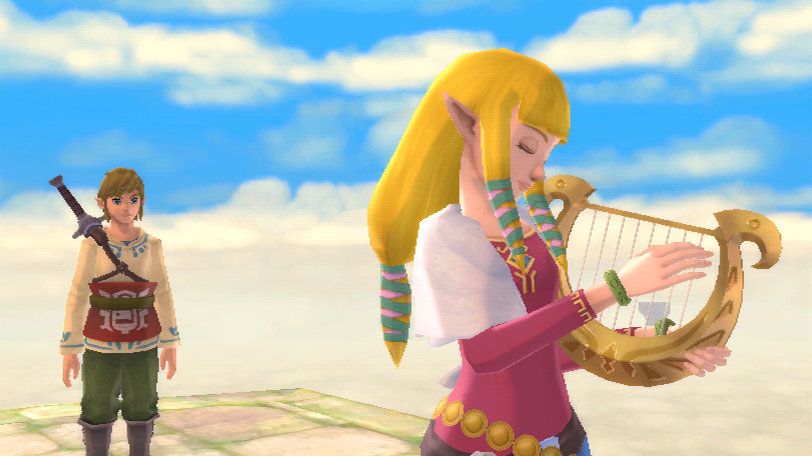 1 / 10
Zelda (multi-platform)
Link's quest to unite the Triforce, save Princess Zelda and slay evil Ganon has required a constantly evolving soundtracks over the past 25 years. As well, aside from <em>Final Fantasy</em>, no other game can boast a North American orchestra tour.
Nintendo