The white of Sonny Miller's right eye was red. Fire engine red. He cocked his head to the side all the time, in fact, his shoulders leaned also to the right, I think. Maybe it was from carrying that box around. That box that made my movie.

Six years ago, I called him. "I've written a movie, it takes place in the water. I hear you're the guy. Can I send it to you?" He called me a few weeks later. "Yeah, I like it, I like it. It really captures what it's like, right?" I told him I didn't have any money, but I was working on it, and that if I ever got the money the question I have is: How do you make an indie in the ocean? 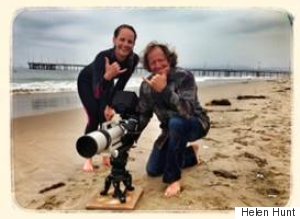 "Yeah, yeah, we can do it." He talked about formats and boogie boards and Go Pros and jet skis. "At the end of the day, though, nature dictates."

He repeated that phrase again and again last summer: "Nature dictates." I'd say, "I know Sonny, I know, but I've got to get this. If I don't get her saying the line over her right shoulder before the wave comes, I don't have the scene." "Yeah. Yeah. Right shoulder. It'll be good. Let's go."

And out we'd walk. Out there. Once a day, he'd say: "You can talk about it so much, and then you gotta just get out there." He carried this box, this box that paid for his house, and his motorcycles and his dying mom's care, and his food and his way of life. I don't know what that was, his way of life, but I heard rumors it included putting up friends and their babies who found themselves between places to live, five dogs, that sort of thing. All paid for by this box he made to make movies in the water. That thing never left his side. I took him to breakfast once, and he brought it to the table.

He'd show up early every day, driving all the way up from San Diego. We'd wrap at seven at night. I'd say, "Sleep in my guest house. We have to be back here at 7 a.m. " "No, I'm good. I'm good." I found out later that he had to get home to check on his mom.

When Sonny arrived at work, he didn't park as much as make a park where his van ended up. He pulled out two bamboo rods and a rattan awning, some aloha fabric, a video monitor, some chairs. Everyone who went in there took a deep breath and smiled. He was pretty much always smiling.

After we made the movie, that is after I got him and everyone to work for half of what they should be paid, after that, we worked some more. The movie was done, but there was so much more to shoot. And, except for one guy on Oahu who never came here and hadn't grabbed onto the movie like Sonny had, Sonny was the only one who knew how to do it.

So, he came, paid even less now for these after-wrap days, he and these beautiful watermen and women whose job it was to keep me from drowning. We shot and we shot. He'd get on the back of a jet ski and point that box at me while I surfed, or fell. While I surfed and screamed during the hardest year of my life. Sonny helped me put this thing on film: A story about a 50-year-old woman who's been through a really, really bad thing and loves the world anyway. He was the perfect person to do it.

We'd go out afterwards, nine hours in the water of afterwards, and they'd drink. So much. People drink so much. But not Sonny. Not on those days, anyway. Not a sober guy. He'd order some Hawaiian cocktail, but like me, he'd drink it slow, or he drank not so I noticed. And he'd talk. About a director he worked with. How the director, on the first day of shooting said, "I'll trade in all these trucks and people for six weeks of Sonny and that box in the water. That's how the movie will get made." 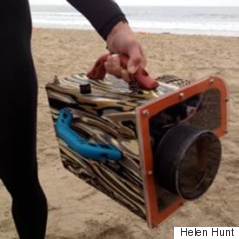 "Yeah," Sonny said, thinking about that director, "He's a good guy, but always picking up women. He had a beautiful wife. I don't get that." I wept inside.

He went out there and out there with me. I'd say, "I need details, of the first time she stands up, hands feet." "Yeah, we'll get it." Sonny would say. "Let's get out there." Out we'd go, water logged, Sonny walking backward, fins flapping, me with my giant yellow board held out of harms way by one of my stuntmen/surf valets necessary to keep me from killing myself.

All these talented people had worked so hard to design it, set it up, but at the end of the day, it was him and me. You don't use lights in the ocean or hair or make up. There's no sound out there. At the last minute even the stunt guys have to duck out of the way. So, in the end, it was Sonny and me.

Sonny died weeks after we finished. Out of nowhere, far as I can tell. His mother died a week before. Thank God, I have to think. But I wonder about his dogs and about why my heart feels so broken. It's him, not me. I've heard people say this, I've even said it, but now I want to go back in time and unsay it, so it can apply only to Sonny. They made exactly one like him.

I'm going to be like that. In the water, smile on my face, loving the world anyway. I am like that, just not quite as much as him.