One of the most shocking revelations to come out of the Sony hack is that people are still saying stupid things in email.

For the zillionth time: You have to assume that everything you write in an email, instant message, or text -- any written communication, really -- will be read by your boss and your spouse and splashed on the front page of The New York Times.

"You may think you’re alone at your computer because there's nobody sitting there, but you might as well be announcing it in a big stadium," said Nancy Ancowitz, a business communication coach, author and adjunct professor at New York University.

Because it just keeps happening! The long list of embarrassing leaks from the maybe-North-Korean hack of Sony Pictures Entertainment involve many, many emails in which people say things for which they are apologizing now: Emails saying kinda racist things about President Barack Obama. Making Hitler jokes. Slamming Angelina Jolie, Adam Driver and Aaron Sorkin in one epic email chain. Trashing the studio's own films. And so on.

This has all of corporate America freaking out about emails now, The Wall Street Journal reported on Thursday. The CEO of one tech company told his executive team "to use the phone or schedule in-person meetings if they need to address a conflict between employees, tackle a tricky client situation or 'speak very openly,'" the WSJ wrote.

Great advice, but I hope we're not all just thinking about this now.

Everybody should have learned this lesson at least 12 years ago. That's when then-New York Attorney General Eliot Spitzer subpoenaed and released emails of Wall Street analysts deriding dot-com stocks as "pieces of shit" and other fun swears, while telling the public to buy them. That led to a massive and costly settlement for Wall Street and temporarily ruined at least one career. 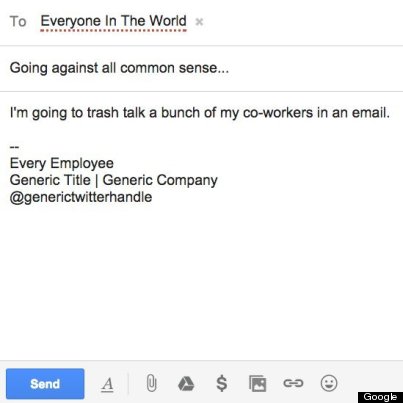 Please stop doing this everyone!

Then there were the many embarrassing emails about subprime mortgage securities, again leading to huge settlements for banks and ruining at least one career.

Not to mention many, many more infamous emails exposing celebrity feuds, sex scandals and other embarrassments.

Why do people keep doing this? Maybe they get so eager to impress colleagues with their catty comments about Leonardo DiCaprio or their brags about manipulating the Japanese yen that they are willing to risk public humiliation, ruined relationships, firing and/or jail time. Often busy people just get caught up in the moment and forget the risks of their words going public, or think the risk isn't all that high.

"Human beings are fallible, we act by impulse a lot. We often think we’re invincible and invisible," said Ancowitz. "There are very few things that are really private, but we think we're above it."

And don't think your emails aren't important enough to matter just because you're not running a movie studio or scamming investors. Instant infamy is available to everybody these days: That racist or sexist joke you're emailing your bros will go viral if it ever gets out. Your boss or office frenemy might not like learning just how you really feel about them. Your significant other might not enjoy the gross come-ons you're chatting to that intern.

And the risk of all this stuff happening is high. Your employer probably has somebody in IT who reads your emails and IMs. Hackers, police, disgruntled employees and scorned lovers could be accessing your stuff right now. Even deleting emails won't save you. Let the Sony hack be a reminder.