On May 9, 2012, I was visiting New York with my fiancé, who works for the Family Equality Council. I was taking some pictures for them as they rang the closing bell at the New York Stock Exchange. That day, no one knew until a few hours before it was going to happen that the first sitting president in U.S. history was about to come out in favor of marriage equality.

I was in a room off the NYSE floor with seven or eight families led by gay parents when the text came in. "He said it," Sean said to me. Scrambling for cellphone service in this marble room in the depths of Wall Street, finally I was able to pull up the text of the interview. Jennifer Chrisler, executive director of the Family Equality Council, spoke to the room and read the text of Barack Obama's interview to all these moms and dads, and they in turn took a moment to tell their young children just how important this moment was. Then we walked across the floor, and the kids and their parents climbed the steps and rang the bell to close the stock exchange for the day. 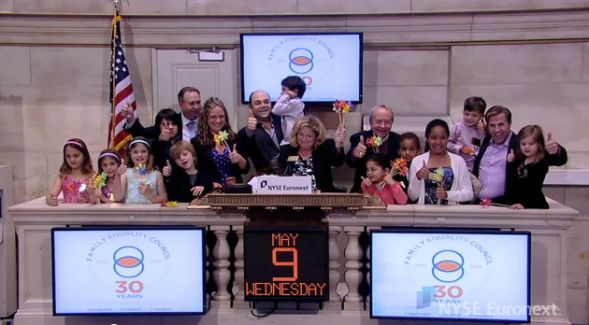 A lot has happened in these short few months since then, but one thing remains the same: President Obama hopes to fight for full equality for LGBT Americans, while the alternative has pledged to write discrimination against LGBT Americans into the U.S. Constitution. Many don't realize just what a difference a president's acknowledgment can make when it comes to recognition of our families, but one little girl sees the importance. Ten-year-old Sophia Bailey Klugh has written a letter to President Obama that is quickly making the rounds on Facebook. Sophia's dads Jonathan Bailey and Triton Klugh posted the unprompted letter with the comment:

I've refrained from all the political posts, but this is just too close to home to ignore. This is not about President Obama -- it's about what's right. So frankly, if you don't agree with the innocent, heartfelt and surprisingly straightforward position of my 10 YEAR OLD DAUGHTER, then please unfriend me because we don't actually belong connected here in the first place.

Please take a look at just how much a child notices when someone everyone knows stands up and does the right thing. 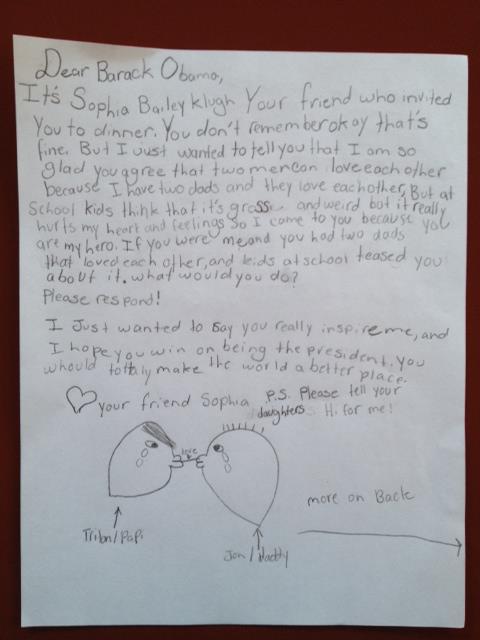