Sophia Bush has been gracing the small screen for years, first capturing thousands of teenage hearts as Brooke Davis on the long-running CW series "One Tree Hill." Since the show's finale in 2012, Bush has appeared in other series like "Partners" and has devoted a chunk of her time to support organizations she's inspired by, including F--k Cancer, Pencils of Promise and the Global Poverty Project.

Nowadays, the 31-year-old actress and activist is living in Chicago -- dealing with the "polar vortex" -- and currently starring as Detective Erin Lindsay in the "Chicago Fire" spinoff, "Chicago P.D." She agreed to take HuffPost Celebrity's #nofilter challenge while volunteering with Barefoot Wine Soles of the Year Program and Trio Animal Foundation.

When's the last time you cried?
Just a couple of weeks ago I cried during the movie "Her." I was weeping by the end.

What's your guiltiest pleasure?
It would either be late-night online shopping or macaroni and cheese.

What's the silliest thing you've ever lied about?
Oh God. I don't know ... It's like the same thing when someone asks you what your favorite restaurant is and you can't think of all the places you've ever eaten. I'm racking my brain into coming up with ... nothing. [laughs]

If you could commit a crime and get away with it, what would it be?
I'd want to do like an old-fashioned art heist just because movies like "The Thomas Crown Affair" were so cool to me as a kid. I think it would be more about shooting a scene of it, but also, if it was in real life, I would feel horrible and return everything ... But I want to feel like James Bond for a day!

What's one thing you do when you're alone that you wouldn't do in front of someone else?
I have friends that I do anything in front of, so ...

Well, are you a sing-in-the-shower kind of girl?
I'm not the kind of girl who talks about anybody's bodily functions. [laughs] (NOTE: Sophia let me know after the interview that she thought I asked her if she was a "pee-in-the-shower" kind of girl. Awkward!)

@leighblickley oh my god. We all thought you asked if was a "pee in the shower kind of girl." Did you say sing!? Hahahaha. #awkward

Now back to the interview ...

But we all have that stuff, you know, that was so well written about in "Sex and the City" when Carrie's talking about your secret single behavior and she's like, "I like to stand in the kitchen and eat Ritz crackers" ... whatever her little monologue about it was. And I think we all have that weird thing. Like, sometimes when I get home at night I open my refrigerator and freezer and look to see possibly what snack I could make myself and stand like a flamingo. That's probably something not a lot of people see me do, while I'm raiding my refrigerator but even that, some of my friends have seen.

What happens in your recurring dream?
They change a lot. I don't have so many dreams that are recurring. The thing that I do think is really cool about dreaming in general is the technology that can start enabling steadier dreams that you can remember. There's a company called Shadow and they're creating the most incredible technology.

What’s the working title of your autobiography?
I don't think I'm ready to write one yet. I still have more things to do!

What or who is overrated right now?
I don't want to pass judgement on anybody.

Describe one time you thought "This is harder than it looks."
My first time on a surfboard. I would loosely define myself as someone who can surf. [laughs] Not well by any means, but I'm learning.

Is a good friend hard to come by?
I think lifelong friends are not something you come across every day, but I also think the world is full of really great people.

When do you feel most at peace?
When I can sometimes give back to communities, kind of like today, rolling around on the floor with the dogs!

Sophia Bush is currently a part of the 2014 Barefoot Wine Soles of the Year Program, which celebrates people doing good in their local communities. To kick off the program, she volunteered alongside the founder of the Trio Animal Foundation in Chicago on Saturday (Feb. 8), helping to raise funds so that shelters and individuals might pay the medical bills of homeless pets in dire need of medical attention. 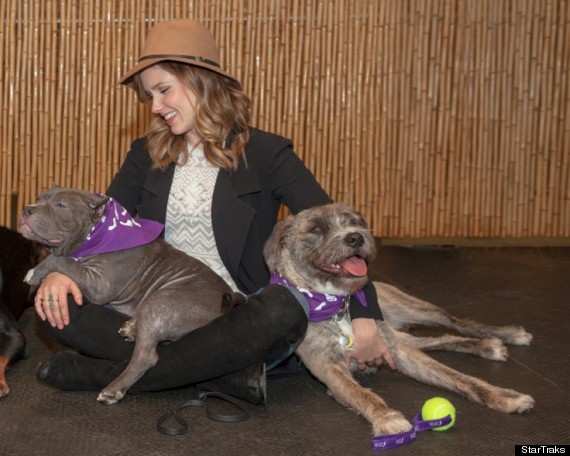 "As a lifelong dog rescuer to now be working in Chicago and find out about such a great organization and to raise funds and awareness is pretty much the dream for me," she told HuffPost Celebrity. "I spent the morning rolling around on the floor with puppies, so I'm in heaven."