It might be the most famous case of celebrity shade-throwing ever: Sophia Loren giving a cleavage-baring Jayne Mansfield some serious side-eye at an A-list party in 1957. Fifty-seven years later, Loren has finally revealed what was going through her mind at that very moment.

The photo was captured at a party in Beverly Hills, thrown to welcome the Italian stunner to Tinseltown, according to Vanity Fair. Loren, who starred in one of her very first Hollywood flicks that year, "The Pride and the Passion," was just 22 years old at the time.

Mansfield, on the cusp of her 24th birthday, was the last to arrive at the bash. She came decked out in platinum curls and a revealing dress. 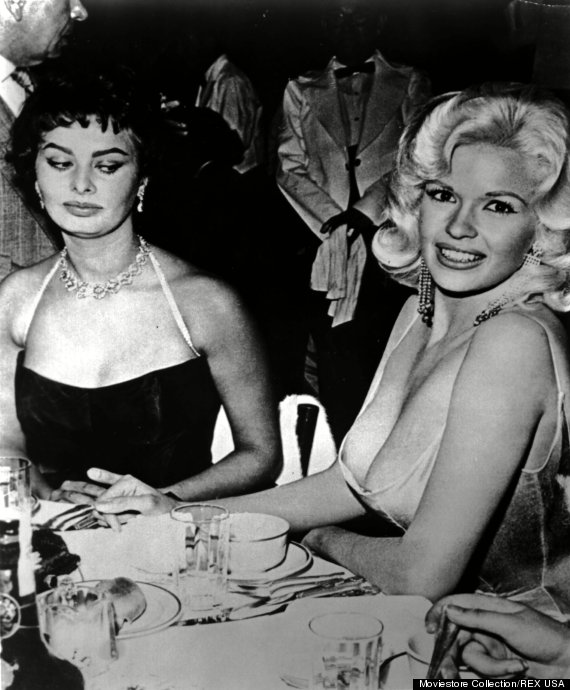 "She came right for my table. She knew everyone was watching," Loren told Entertainment Weekly. "She sat down. And now, she was barely … Listen. Look at the picture. Where are my eyes? I’m staring at her nipples because I am afraid they are about to come onto my plate. In my face you can see the fear. I’m so frightened that everything in her dress is going to blow -- BOOM! -- and spill all over the table."

On Tuesday, Loren released her memoir, Yesterday, Today and Tomorrow: My Life, which chronicles her journey through a career of more than six decades before the camera. She discusses the party in the book, writing:

At that moment, Jayne Mansfield arrived. The crowd of guests parted to let her through as she headed straight for my table. She moved forward, swaying on her heels, perhaps not completely sober, with something grand and imperious about each step she took. She knew everyone had their eyes on her, and how could anyone not gape at her neckline, which was more than generous. It was as if she were saying: "Here comes Jayne Mansfield. The Blond Bombshell!" She sat next to me at the table and started talking -- it was like a volcano erupting. As she got more and more worked up, suddenly I found one of her breasts on my plate. I looked up at her, terrified ... One especially quick reporter took a picture of the scene, and the image went around the world. I refused to autograph it. Hidden behind Hollywood's enchanted kingdom were some coarse and grotesque sides, which I refused to have anything to do with.

On Nov. 12, the American Film Institute will honor Loren at the AFI Fest in Hollywood.