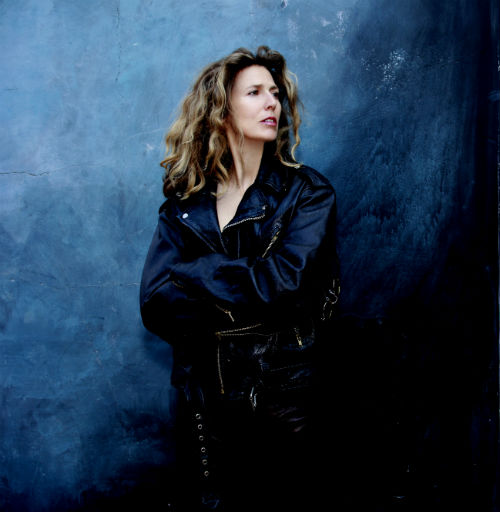 It's been eight years since Sophie B. Hawkins released an album of all-original material. In that time she's become a mother, supported Hillary Clinton's presidential campaign, helped clean up the Gulf after the 2010 oil spill, and made peace with her childhood, which was filled with confusion and unhappiness at the hands of two alcoholic parents.

The Crossing, Hawkins' latest album, finds her surrendering to the past, accepting her father's death, and in the end emerging with happiness she's never known before.

"It's a very positive crossing for me," Hawkins says. "I've just been able to leave the shore of all this struggle and baggage, and it doesn't even matter what's on the other side. It almost doesn't matter where I'm going; it just matters how I'm going."

This year marks Hawkins' 20th anniversary in the music industry. She first erupted on the scene with her debut album Tongues and Tails, which featured the sensual "Damn I Wish I Was Your Lover." That was soon followed by "As I Lay Me Down." While she was riding high on the charts, behind the scenes she was struggling with her record label for creative control over her music. Realizing she wouldn't be able to fully express herself, she decided to chart her own course. Subsequent releases brought critical success but lacked the commercial success she had once experienced.

Hawkins doesn't have regrets. One of the songs on The Crossing is called "Dream Street and Chance." She calls it a "beautiful and complex" song that talks about time.

"I'm standing on the corner of Dream Street and Chance," says Hawkins. "It feels like anything can happen."

She is certainly doing her best to align the stars. In addition to a Broadway musical she's been writing on for the past several years that will reportedly star Kristin Chenoweth, she's also set to portray Janis Joplin in a play this fall. It all started with an idea that her long-time partner, Gigi Gaston, had. Without any hesitation, Hawkins committed to the project. The play, written by Gaston, will tell the story as if Joplin came back 42 years after her death and says all of the things she never got to say.

At this crossing in Hawkins' life, she is no longer the woman who lives life in the past. She's far too busy designing her future. As she sings in a new song, "Life Is a River," "I won't sit on the banks and let it roll on by me. I need to ride on."

The new album is called The Crossing. What does that mean?

It came from a painting I did that's in the album, of five boats crossing in this misty and romantic sea to a place. I said, "That is like where I'm at right now." I believe that is where humanity is at right now. It reminds me of one of the most influential quotes I've ever read: "Angels get my mansions ready, for we are crossing this misting river one by one."

This album has a lot of emotions about your father, who died of cancer in 2006. One song is called "Missing" and contains the lyrics: "We've been missing for too many years, and I want a healing in place of all these tears."

That was a song that just poured out right as I got the letter from my sister that he was really dying, which was different from "Daddy's sick." It's that moment in your life when you finally realize that this is really it.

The song also refers to New York in the spring, which you have mentioned in the past is very special to you.

Oh, God, and that is the place where he raised me. It's so interesting that the romantic side of my life comes from my father, who I really didn't even know that well.

Yet you talk and sing about him as if you had this deep relationship. However, you once said that growing up your home lacked structure and was like the "den of inequity."

His death was a giant coming into focus of reality. I can really compare this to being a mother now. It's such a difference when your parents are not there. You romanticize and create relationships that aren't maybe there. Every child fills in the holes. Even in the greatest relationships with parents, children either blame themselves for everything or do the opposite. So, with my father, anything I could hook into with him that was positive, like his love of Central Park and New York, I did it. When he died, anything that I created in our relationship, I had to come to terms with.

How would you describe your father?

A lot of the intelligent communication -- not the crazy communication -- was with my father. He did see a lot more. He stayed in the background. I always called him the silent cat. He did have a lot of stuff he never worked though. It's incredibly positive that he died for me, selfishly. That's when I got to deal with my life as it is and stop wishing and hoping for things to be different.

What did you want to be different?

I wanted to talk about the truth with both of my parents. I was the one always trying to get Daddy to go to meetings. I was really proactive in trying to heal my family. I wouldn't give up. My whole life was about trying to get my father healthier, and there were moments when he was healthier. Then someone would give him a drink. I always felt if he had one person in his life who supported his healthy side, he'd be on his way.

That's a lot to carry for a young person.

Yeah, but what's the other option? Either you become an alcoholic like that or you just become cold. I'd rather be on the side I was on and be called crazy than be in denial. I wanted to end the denial. It never mattered to me who did what. I just wanted to talk about it.

One of your new songs is called "Heart and Soul of a Woman." Finish this sentence: Sophie B. Hawkins is the kind of woman who...

Let's you be yourself.

What's the biggest misconception about you?

That I'm only about creativity. I'm actually always looking for the good news. Sometimes people can portray me as someone who is always stuck in the bad news.

In November your son, Dashiell, will turn 4. What has being a mother taught you?

The real difference between being present and connected rather than just pretending to be present and connected. We all do it to a certain extent. We're all struggling to get out of the past. We see something that reminds us of something and then we bring our baggage into the present. Then we project it on to people constantly. Everyone says you learn from your child, and it's so true. They are constantly teaching you how fucked-up you are!

Another song on the new album is the traditional spiritual, "Sinnerman." Who are you singing that song to?

It will be the guy who dresses so well. It's like "The Emperor's New Clothes." There's always the guy who is not really that person, but who projects all these great things. Meanwhile, they are robbing us blind. Some people get totally taken, and others learn how to navigate the waters better.

One could think it's about politics, since you have been very outspoken. In 2008 you campaigned for Hillary Clinton, and in 2010 you said about President Obama, "He bothers me." Does he still bother you?

It's relevant with the election coming up. You identify yourself as omnisexual -- a term you feel reflects the fact that you can fall in love with anyone as long as you love the person's mind, heart, and soul. What are your thoughts on Obama's stance on same-sex marriage?

He's all talk. He hasn't done anything. There are politicians who vote for gay marriage. Let's put them on a big website and give them a big award. But all these people who talk and don't do, let's just wait and see. I'm so tired of it, and gay people are so foolish to run around and say, "He said this and he said that." Listen, what did he say last week, and when is he ever going to do anything? I'm so tired of people being so stupid. I'm sorry. That's what I'm going to say. Put your money where your mouth is, Mister. I'd say that to anyone. Why are we so easy? Why are we so cheap? You can buy a gay person's vote for nothing. Unbelievable. Low self-esteem. I'm so tired of it.

What would you advise the LGBT community to do?

I think they need to do exactly what I said. They need to find every single person -- Republican, Democrat, and Independent -- who has ever done a vote in their favor. Then they should make a website and give each one of those people a plaque and say, "Look at this person who did something. Obama, you say that, do it, and until you do it, we won't support you."

What are your thoughts on same-sex marriage?

Gay people are all about publicity and show. Even the marriages. If you really want to get married, fucking stay married. Show the world. Stop having affairs, and stop acting like straight people. Don't just yell and scream about having rights and then treat each other like shit.

In five years you'll be turning 50.

Wow! I always think it's sooner than that, and I love to hear that it's not as soon as I thought!

Where do you see yourself at 50?

I'm about to hit my stride. I've been working up to this for a long time. I'll be very wealthy; it doesn't matter in what way. It may be in happiness, joy, and health. I think it's going to be an incredible time for me.

For more on Sophie B. Hawkins, visit sophiebhawkins.com.