Food and fashion have, at times, had a fraught relationship. However, Sophie Dahl--as sui generis model, writer, and, now, cookbook author--skillfully and beautifully symbolizes and unites those two potentially antithetical passions. Miss Dahl's Voluptuous Delights not only fulfills its subtitle promise of recipes for every season, mood, and appetite, it also describes Dahl's ambiguous relationship with mood through telling anecdotes and vivid stories. Dahl is as inspiring as her recipes are delicious; this is a book to curl up to on the sofa and use in the kitchen. Bon appétit!

Louise McCready: First of all, I loved your cookbook because it felt so genuine, unlike many other celebrity cookbooks. Not only did the stories reveal much about yourself and your relationship with food and weight, but the recipe format feels as though a friend shared them. What was the original inspiration behind the book? 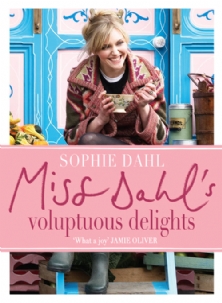 Sophie Dahl: When I was in England, the one question that everyone was always asking was about how I got thinner. I thought there must be a way of answering this once and for all on my own terms so that it doesn't haunt me for the rest of my life. I didn't want people to be obsessed about the fact I was kind of round when I was 18. I thought there must be a way of incorporating that story into my other love, which is cooking and food writing. I grew up around lots of cooks--my mom, my dad, my grandmother, both of my aunts--and because we all lived such nomadic lives sending recipes or speaking about food was also a way of communicating. My aunt would ring me from LA and ask, "How do you make that miso black cod again?" Food is a great connector.

LM: In the introduction to your new cookbook, the story you tell about two childhood pets, Pancake and Maple Syrup, made me laugh because it sounds more like a sexualized Peter Rabbit tale--complete with a rabbit and fox--than a Roald Dahl story. Who are your writing inspirations?

LM: No, but I heard about it and want to.

SD: You know it's about the artist Philippe Petit who spun a wire between two world trade buildings and climbed across it. This is a novel about that day and all the different people watching. It's a very, very carefully spun tale, so he's my current literary crush.

LM: Other than your family, whom you mentioned are all great cooks, what cooks do you admire or find inspirational?

SD: I love the Cordon Bleu-trained serious cooks, but my real love is the rustic style of the home cooks--Nigel Slater, Darina Allen, Nigella Lawson, Ruth Rogers and Rose Gray (of River Café). I like cozy food. I've got hosts of cookbooks by people I love--Simon Hopkinson's Roast Chicken and Other Stories, and those by Ambrose Heath, a food writer from the 40's.

LM: You start the book with an "unceremonious leave" from school. Do you ever regret leaving school? Or do you have plans to go back?

SD: I try not to have regrets because I don't know that it serves much purpose. I'd love to go back after I have kids and study something like archeology. I think there's always learning to be done. On rainy days, I always think, what would I go back and study? There's a host of things.

LM: I enjoyed reading about the year 2000 for you--transcontinental trips bringing you to new countries for each meal and suitcases stuffed with foods customs wouldn't allow. Much has been written and discussed about the differences between today's sample size models and plus-sized models. You wrote about how difficult it was for agents and designers to categorize you, especially when you were in between the two sizes. I'm sure the answer to this is longer than an interview can allow, but do you think the modeling industry and modeling sizes will change?

SD: I think it's a chicken and egg thing. Until each group takes responsibility for their own part in it, the answer is no, not really. As long as a curvy girl is held up as an anomaly, the whole thing is being perpetuated. When a curvy girl is no longer being hailed as different, we've made progress. I could talk about it for hours, but if you object to very thin, unwell girls being used in advertising, then as a consumer, you have to make a first step. We've become a quite apathetic culture. It's all well and good to just talk about how horrified you are, but unless you do something and write to companies, then nothing really gets done.

LM: Like you, I've always loved food and, in fact, was a chubby child. I thought it was interesting when you suggested that your burgeoning interest in food would have been better suited in the court of Henry VIII. But based on what I've learned of the past couple centuries, I wonder, have women in any era had the societal implicit consent to indulge in food like men?

SD: Did you read the biography of Georgiana, the Duchess of Devonshire?

SD: It's a great biography. The times they were living in--the late 1700s--were very different. So much of what they did focused around eating, they were much rounder, and fashion was much more forgiving with the empire waist dresses. A curvier form was more celebrated. I think there have been moments where that is true. I think we're not in one. What do you think?

LM: During this past century, fashion has always encouraged a svelte figure. In the 19th century, small waists were considered attractive enough that women wore constricting corsets. I watched A Philadelphia Story again the other day, and I was struck by how thin Katherine Hepburn was in a bathing suit.

SD: You're right. The models in the past century have always been thin, back to the women Avedon was shooting in the 50s and Irving Penn. They were like ballet dancers. In that regard, not much has changed. I guess each generation gets outraged and forgets what's gone on before.

LM: That's true. Everyone loves to forget history. When you came to New York, you mention American biology classes that warned about the dangers of anorexia. But considering the dangers of obesity in the US today, I wonder if nutrition should be taught in biology? You briefly mention Jamie Oliver and the progress he's made at schools. I found his television show Jamie's Food Revolution was incredible and eye opening. What do you think of the future of food education or the importance of combating obesity in children?

SD: I think it's seriously important, and it's as much of an issue, if not more now, than anorexia. Again, it all boils down to balance. I think these things should be taught in a balanced way and not in a hysterical way. I know that here in England, the schools do teach nutrition, and place an emphasis on food and where it comes from; it's something that should be imprinted from an early age.

LM: I do feel that's one area in which England is ahead of the US. They seem to have more programs in place for that.

SD: It's an exciting time to be here because there's a host of slow food supporters, amazing green markets, and conversations about the carbon footprint of food. In cosmopolitan cities in the US, you can find healthy food, but the further out you get, the more difficult it becomes. In England, it's not the same.

Another difference between New York and London is that I notice so many people are cooking at home in London where the whole take-out culture is much less. When you're thinking about where your food comes from and you know what's going into it, there starts to be a sort of consciousness about food. When you're always eating food on the run or getting take-out, because you haven't been involved in the preparation, you don't think about it as much. Part of the joy of cooking is going through that process and alchemy of what goes with what which you miss out on if you don't get to do that.

SD: There's a sense of pride in it. It's a bit like being a child and making your first cake or making something in art class. Even if it doesn't quite turn out right, you still made the effort.

LM: I completely agree with you. You've said that people feel unburdened to speak to you about their own weight issues. I loved that you could talk indifferently about your own weight, like a collection of coats or clothes you've worn at different points in your life. You say you learned to think of food as something your body needs, not as a faddish diet or counting calories. I feel that must have been incredibly difficult. Do you have any advice for people who are looking to find peace with food?

SD: I think the first thing to be is to have a sense of humor about it and to be kind. The moment you start punishing yourself, that's where it gets way off base. I was talking to my sister about it last night. She was saying, if I have one piece of cake, then I want all of it. I totally, totally recognize that, but when you become more comfortable with your body and you listen to your body, you learn. Culturally, women often reward themselves with food and say, because I'm on vacation I can have this. That's such a skewed way of thinking because food shouldn't be something with which we reward ourselves; it should just be part of our daily life and not a battleground. I think I said in the VOGUE piece, food is inanimate. We give it such power and yet it's an inanimate thing. The moment one realizes that actually I'm the person in charge here and this isn't a battle between food and me, then it becomes a little easier.

LM: That sounds so simple, but that makes a lot of sense.

SD: It's probably easier said than done. The beginning of it is the simple fact that food is not the enemy.

LM: Those are very good words of advice to end on.