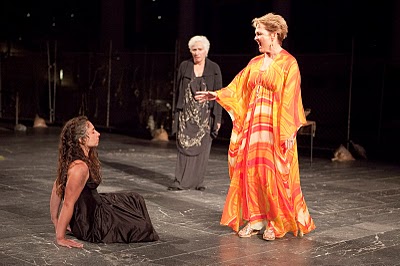 The pursuit of justice is usually considered a noble aspiration. But what if that pursuit is tied to a grievance-driven, murderous obsession? Such is the disturbing premise of Sophocles' Elektra.

On a chilly Thursday evening at the Getty Villa's Fleischman amphitheater, the classical Greek play received a world premiere in its new translation by playwright Timberlake Wertenbaker. Eight actors and two musicians, under the accomplished direction of Carey Perloff, artistic director of the American Conservatory Theater, validated the ancient work as having plenty to say about contemporary hang-ups. Which, of course, are pretty as much the same today as they were two thousand years ago.

Sophocles begins the action in his version of the myth after Clytemnestra and her paramour, Aegisthus, have murdered Agamemnon, the father of Elektra and Orestes, and claimed his throne. Both siblings pine for revenge, but the exiled Orestes is only occasionally able to communicate with an oppressed Elektra, who languishes at her mother's palace hoping Orestes will return to avenge them both.

Christopher Barreca's stark designs set the scene. The Getty Villa's impressive north face is a stand-in for the entrance of the Mycenae palace, fenced off as if under siege in chain link and barbed wire. The actors come and go before this gated façade, with musicians providing an underpinning to punctuate the action. Candice Donnelly's costumes are modern slacks and jackets for most of the men, long dresses for most of the women, the latter suggestive of classic Greek styles.

The action begins with Annie Purcell's crazed Elektra, nearly feral with self-neglect, her dirt-stained face a study in fear and loathing, lamenting, "I have no strength, no friends," and feeling "the expert on misfortune." She implores her sister, Chrysothemis, a pretty but passive Linda Park in the flowing white gown of a wannabe princess, to help take down their mother - alas to little avail.

Elektra has better luck with Olympia Dukakis' stentorian Chorus Leader, who, like a sympathetic town elder, at first implores the young royal to restraint, but later is won over to her revolt. Dukakis here and later occasionally reverts to the original Greek language for passages of lamentation, alternating with the other Chorus actor, Sharon Omi. The effect produced is similar to that of mystical Latin in Catholic liturgies.

Sparks fly in Elektra's confrontation with the Clytemnestra of Pamela Reed, whose commanding entrance has her draped in flaming orange and red as she promenades the palace's grand corridor, its chain-link barrier parting like an accommodating Red Sea. The very embodiment of haughty pride, Reed is as unsparing a Greek Mommy Dearest as Purcell is an insolent Elektra. The two implacably antagonistic women argue like lawyers facing off in a cosmic courtroom drama, accusation and counter accusation hurled like daggers.

Old pro Jack Willis is a jewel as the Tutor who conspires to visit the palace bearing a disarming deception -- an urn supposedly filled with Orestes' ashes. Call it a Trojan pony that throws Clytemnestra off the scent of treason. Willis' rough-hewn, hilariously bogus description of the death of Orestes gives comic relief just in time. Credit Sophocles for this deft interlude between Elektra's two most emotional encounters.

Elektra's mourning scene for Orestes is a searing moment in emotional loss, but it is short-lived. As the newly arrived Orestes, Manoel Felciano brings hunky heroism to the role. His scene with Elektra, in a well-nuanced and gradual revelation of his identity, gives momentary opportunity for the two siblings to try a little tenderness before the Tutor announces to his young conspirators, "This is the moment to act."

Orestes' bloody dispatch of both Clytemnestra and her consort, Aegisthus -- portrayed by a masterfully arrogant and intimidating Tyrees Allen -- is accomplished off stage, but is no less repellent for that, as the queen's bloody body is soon paraded before Aegisthus -- and the audience -- shortly before he meets his own end.

The musical contributions of supporting actor Michael Wells on percussion, Theresa Wong on a modern cello, and Omi as vocalist are impressive. Composer and Musical Director Bonfire Madigan Shive's music establishes from the start a mood of lamentation with sighs in the high register of the cello, cruel sonic blows soon answering from a hand drum. At emotional moments the cello's tone will constrict in pain or lament in its lowest register. At one point it is even plucked like a guitar.

Wertenbaker's translation sustains a requisite tone of high-style epic poetry, even as it peppers it with trenchant patois. Sophisticated phrases like "an exponential explosion of outrage" or "Your spirit is turned to cinder" may be quickly countered by Elektra chatting in vernacular about a "tit-for-tat murder," or Tutor observing, "Orestes is dead; that's the long and short of it." The mixture of high and low invigorates the dialogue.

Elektra bears a close resemblance in incident and psychology to Shakespeare's Hamlet. Both explore the corrosive damage of compulsive memory that leads to matricide. Elektra's loathing will not forgive or forget. As with Hamlet, her urgency is magnified by her utter powerlessness to avenge the wrong she sees. Elektra/Orestes and Hamlet desperately seek the right moment for action, and both seize it when it arrives.

Although the fateful consequences to Orestes do not appear in this play, as they do in Shakespeare's Hamlet, the Greeks would have been prepared for the misery about to visit him from the Furies. Given the parallels in the two plays, Shakespeare may have known little Latin and less Greek, but he must certainly have known his Greek mythology.

Sir Francis Bacon, a contemporary of Shakespeare and one of the founders of modern thought, observed toward the end of his own tumultuous life: "Revenge is a kind of wild justice; which the more man's nature runs to, the more ought law to weed it out."

Modernizing civilization had already by Bacon's time erected grand legal institutions to adjudicate disputes, and those institutions have been strengthened measurably in ours. Too bad human emotions have progressed so little over the same passage of time.

Elektra runs through October 2, 2010, on Thursdays -- Saturdays at 8 pm. An accompanying exhibit, The Art of Ancient Greek Theater, up through January 3, 2011, is well worth a separate visit.