Sweet, earthy sorghum was once a staple of the Southern cupboard. Today, it's being revived by thumbs-in-the-suspenders farmers who find themselves accidental artisans. American Food Roots co-founder Michele Kayal tells the story. 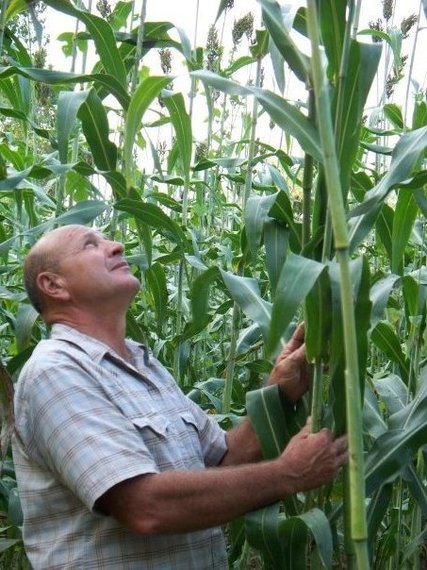 On a recent Saturday morning, Danny Ray Townsend stood stirring a pan of sorghum over a hot hickory wood fire.

The breeze came only now and then, wafting through the shed and carrying the syrup's grassy scent to the crowds gathered around the mule-powered mill.

"We've got little spoons and we give a hot sampling right off the pan as it gets done," says Townsend, a fifth-generation sorghum farmer and syrup maker from Jeffersonville, Ky. "A lot of them never seen it before. And the grandfathers, they used to do it, so they're telling the kids about 'This is the job I used to have, I used to ride the mule, I used to feed the mill.' They're kind of doing our job for us, keeping this alive."

"This" is sorghum syrup, sometimes called "sorghum molasses," a thick, sweet confection rung from spindly cane that once was a staple on tables throughout the South and the lower Midwest.

On a normal day, the 64-year-old Townsend feeds the stalks by hand through the diesel-powered mill at his farm. But at the Morgan County Sorghum Festival in West Liberty, Ky., he lets a friend's mules -- called Red and Fred -- show kids and city folk how the labor-intensive food was produced just 50 or 60 short years ago. It takes about 8 gallons of cane juice to make a single gallon of syrup, Townsend says. During the three-day festival, which took place this year in late September, Townsend says Red and Fred can usually squeeze out about 75 gallons of syrup.

The 44-year-old Morgan County festival is one of the country's oldest and largest, drawing as many as 20,000 people to the county whose population maybe hits 14,000. But throughout September and October -- sorghum harvest time -- festivals dot the landscape from Georgia to Oklahoma. In Clifford, Va., sorghum making takes place against the backdrop of championship jousters and stand-a-spoon it Brunswick stew. At the festival in Blairsville, Ga., the sugary syrup fuels pole climbing, log sawing, horseshoe pitching and rock throwing. At the end of the month, show horses, marching bands and a "Brothers of the Brush" beard and mustache display will celebrate sorghum at the festival in Wewoka, Okla., where you can spread the syrup on Indian fry bread.

"This is part of Appalachian food," Townsend says. "We got to keep it alive. I had two sons and I don't know whether they'll continue. But it's what I like to do."

To read more about sorghum -- and for the recipes that go with this story -- please visit American Food Roots.