So, when did Ann Coulter start being afraid of Canadians? Well, this week, apparently, when a crowd of roughly 200 college students (the AP puts the number as high as 2,000 whereas both student eyewitnesses and the Ottawa police assert the number was closer to 200) of every political stripe protested her speech at the University of Ottawa, prompting her to cancel it due to "security concerns."

Her three-college tour was organized by the International Free Press Society, a conservative group ostensibly dedicated to "free speech" but whose website proposes, that "powerful forces within Islam" are planning to take over the world.

For Ann Coulter, it must have been love at first sight.

During her first speech on Monday evening at the University of Western Ontario, Coulter managed to single-out and mock a 17- year old Muslim Canadian political science student named Fatima Al-Daher who asked about Coulter's oft-quoted line about how Muslims should be forced to covert to Christianity after their countries were invaded and their leaders executed. Coulter had also proposed that Muslims be barred from commercial air travel. They could always use "flying carpets," she said.

According to an article in London Free Press, the exchange went as follows:

"As a 17-year-old student of this university, Muslim, should I be converted to Christianity? Second of all, since I don't have a magic carpet, what other modes do you suggest," Al-Dhaher said to loud and sustained applause.
"I thought it was just American public schools that produced ignorant people," Coulter replied, prompting her own round of applause.
Coulter then noted many Japanese were converted to Christianity after the Second World War and "we haven't heard a peep out of them."
To shouts of "Answer the question," Coulter finally replied, "What mode of transportation? Take a camel."
"Are you going to convert her now?" another student shouted out.
"No, there are some people I'd just as soon not convert," Coulter retorted. Al-Dhaher, who left the session soon after, said she came to the speech because it's important to hear all sides of the political spectrum.

Earlier in the week, Coulter had received a cordial letter from Francois Houle, the vice-president academic and provost of the University of Ottawa welcoming her to the nation's capital and suggesting that she review what constitutes hate speech under the law. Houle pointed out that, for instance, "promoting hatred against any identifiable group would not only be considered inappropriate, but could in fact lead to criminal charges" under the Criminal Code of Canada, specifically Sections 318 and 319.

Coulter told newsmax.com that: "The Provost of the u. of Ottawa is threatening to criminally prosecute me for my speech there on Monday--before I've even set foot in the country!"

Coulter neglected to add that the Provost had no authority to "criminally prosecute" her, or that the letter had been intended to advise her, for her own sake, of what the Canada's hate speech laws say, and where she might be vulnerable given her penchant for gay-baiting and Muslim-baiting.

That night, a near-riot by students at the University of Ottawa erupted before Coulter's speech there. While initial reports seemed to imply that the organizers made the decision to cancel the speech (hinting that Coulter was the innocent victim of some nefarious experiment in Canadian censorship) it later came to light that Coulter's bodyguard made the decision to cancel the speech in consultation with on-site security when someone pulled a fire alarm in the building.

According to CBC news blogger Kady O'Malley, Coulter was offered secure options, but chose instead to cancel.

First, contrary to what Coulter seems to suggest in a brief phone interview with Macleans.ca scribe Colby Cosh, it was not the police who "shut it down." I spoke with Ottawa Police Services media relations officer Alain Boucher this morning, and he told me, in no uncertain terms, that it was her security team that made the decision to call off the event. "We gave her options" -- including, he said, to "find a bigger venue" -- but "they opted to cancel ... It's not up to the Ottawa police to make that decision."

According to Coulter, a significant part of the blame for the protest--during which there were no arrests, no violence, and no reported threats of violence--belonged to Francois Houle (whom she referred to in the media as "A-Houle") for creating a "climate of hate" on campus with his letter--a private letter to her that was mysteriously leaked to Coulter-friendly venues like the National Post, Canada's most conservative national newspaper and to newsmax.com, the website that bills itself, somewhat wordily, as "the leading independent online news site with a conservative perspective."

The timing of the letter's release seems to throw into question how, by whom--and to what end--it was leaked in the first place.

But Coulter reserved her most vindictive barbs for the college students who protested her appearance. "It's at the absolute bush league, bottom of the barrel schools that you get the worst treatment," she ranted. She called into question the intelligence of her protesters and claiming that even at "the stupidest university in America" nothing like this had ever happened to her before this trip to Canada. In a final bizarre gesture, she threatened to file a human rights claim with the Canadian Human Rights Commission claiming that she was the victim of "a hate crime."

The larger question is why the conservative lioness Time magazine once branded "Ms. Right" is schlepping across Canada like a road-company of Cats in order to lecture Canadians on "media bias" and "political correctness." Canadians invented political correctness. What's next on Coulter's travel itinerary? Lecturing Parisians on disdain? Lecturing the Swiss on making cheese? Lecturing Texans on how to play football?

Of course, given that the Clare Boothe Luce Policy Insitute shouldered part of the (reportedly $10,000 per speech) cost of bringing her to Canada, she was a relative bargain. But still, given her famously documented contempt for the country and its people, her presence there at all is more than a little incongruous.

Perhaps Coulter thought speaking on Canadian college campuses would be just the nip/tuck she needed to lift her sagging relevance among young people on college campuses at home, many of whom are perhaps starting to find Coulter's brand a little shrill and shopworn.

In truth Coulter is rapidly becoming a parody of herself. She's beginning to resemble the mythical spinster aunt no one under 25 wants to sit next to at family dinners--the one who rants stridently about commies and faggots and Jews when she's drunk, and hits on her young nieces' boyfriends.

This past week, she also showed herself to be another sort of parody, one so out-of-date that most people under 25 can barely remember it--the post-war "ugly American abroad" who believes local laws and customs ought not apply to her. The Coulter variant clanks around in a giant crucifix, swilling Diet Coke and insulting her hosts at every turn while her smattering of attendant Canadian neocon bobbleheads grin and shuffle their feet.

There's a measure of surrealism in Coulter mocking the Islamic Canadian girl at the University of Western Ontario, mostly because it isn't hard to picture Coulter's reaction to a visiting Canadian polemicist at an American university singling out and deriding an American student in a comparable situation.

It's likewise ironic that Coulter should try to play the "free speech" card in Canada at a time when free speech, for her core readership at home, appears primarily focused on racial epithets and threats of violence hurled at African American congressmen. Perhaps this exact moment, when civility is at its lowest point in the American dialogue, is a dubious one for Coulter to be hysterically demanding that the "hate crime" of receiving a letter from a Canadian university advising her of the definition of hate speech under Canadian federal law be investigated and prosecuted.

The Ann Coulter Circus steams westward to Calgary on Thursday, where she can reasonably expect to find a less-hostile reception. Alberta is a conservative province and Coulter could theoretically find a more receptive audience among the students there.

By Friday she'll be back in the U.S. and Canadians will briefly discuss her the way the hosts of a party discuss the boorish party guest no one can remember inviting, the one who threw up in the downstairs powder-room sink without telling anyone.

There's also a generational perspective at work here worth noting.

While the middle-aged wring their hands about the anti-Coulter protests, there's a lesson to be learned from the youth. The students at the University of Ottawa who put their boots to the ground in protest clearly and forcefully expressed their view that Coulter's racism, her homophobia, or her penchant for glib sound bites about how torture should be a televised spectator sport had no place on an enlightened, multicultural Canadian college campus in 2010--at least not on theirs, if anywhere in a civilized society.

They said No thanks. Take it back where you came from. It's not welcome here. It isn't that the students, or the university, were "afraid" of her right to free speech. They just weren't that into her.

It's a poignant reminder to anyone older than 40 that their demographic has historically marinated in the status quo, leaving the young to fight and die in their wars, effect social change, and stand up to the vituperative social toxicity represented by Coulter and her kind. Sic semper.

There might be a lesson here if Coulter's arrogance would allow her to learn it, but her oeuvre is a testament to the power of self-deluding hubris and the commerce of divisiveness for profit. There's not a lot of intellectual room in that oeuvre for self-examination.

While it's theoretically possible that Coulter, who once famously opined that Canadians were lucky the U.S. didn't roll over and crush them, was actually frightened away by 200 angry Canadian teenagers who felt that the tainted fish she was selling had no place on their college campus, the ensuing press bonanza couldn't have worked out better if it had been a cynically-crafted publicity stunt on the part of Coulter and her sponsors.

If it was indeed all a publicity stunt, it's only a mater of time before she's cackling out a post-mortem of her misadventures in Soviet Canuckistan over a steaming cauldron on FOX, with Glenn Beck and Bill O'Reilly, or any of the network's seemingly-interchangeable right-wing talking heads. As attorney Ezra Levant, one of the organizers of her tour, said after the cancellation of her Ottawa speech, the incident "proved the point of the whole tour."

The enduring irony of Coulter being driven off like a vampire bat in some Hammer horror film by 200 Canadian kids exercising not only their free speech, their right to lawful protest, but their right to assembly, is rich indeed.

So are her subsequent complaints about being "suppressed."

Like the liberal "whining" she endlessly derides, her own whining this week about how she was treated by the scary Canadian students sounded tinny and false. It's hard to believe it doesn't sound just as false to her.

Apparently free speech, at least in this case, was only ever intended to apply to Ann Coulter. 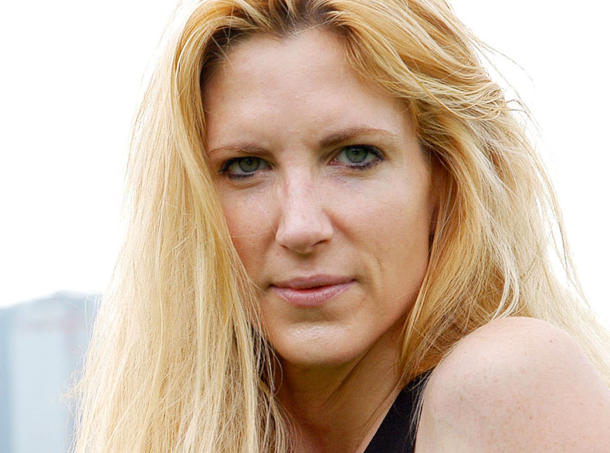