Over the last several days, the Bernie Sanders presidential campaign has put forth a narrative that suggests if the super delegates voted according to the vote of their state then Sanders will win the Democratic presidential nomination. Being a Harvard MBA and a numbers nerd, I decided to take a look at the Sanders' campaign hypothesis.

There are 330 super delegates from the 28 states and territories that have voted so far in the Democratic primaries and caucuses. If the super delegates were allocated based upon the percentage of the vote garnered by Clinton and Sanders in each state or territory, Sanders would be allocated 146 super delegates and Clinton would get 184 super delegates. That would bring Clinton's delegate total to 1323 and Sanders to 971. That is better than the 1614 to 856 lead that Clinton holds with the currently "committed" super delegates. So Bernie's hypothesis does prove the delegate race would be closer. What it does not prove is that Sanders campaign would be victorious. In fact, it underscores the uphill battle facing Sanders.

Even with a proportional allocation of super delegates based upon their underlying state or territory, Sanders needs to win a whopping 57.2% of the remaining 2469 delegates and vote in the rest of the primaries and caucuses to overtake Clinton. Is that possible? Yes. Is it likely? No. Sanders needs to beat Clinton in California and New York by 14% or absolutely kill her by high double digits in the other states and territories yet to vote. Highly doubtful.

As a dyed in the wool Democrat, I was willing to spend a Sunday morning actually running the numbers for Sanders hypothetical super delegate proposal; unfortunately for him they paint a bleak picture even if the super delegates voted according to their state results. Sorry, Bernie. 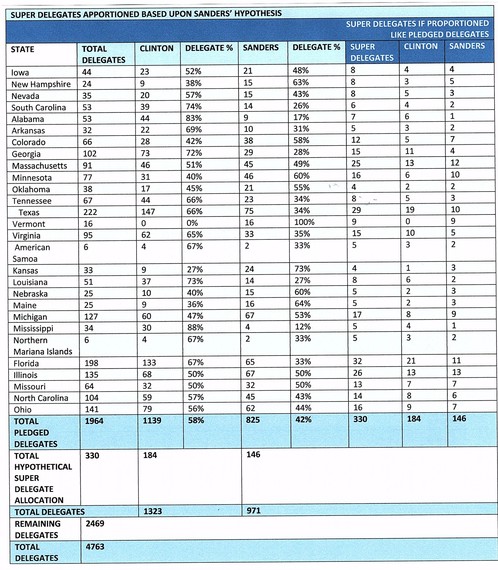