I don’t wanna ruin your drunken stumble back to the rickety outhouse, chainsaw guy at this haunted house/backyard corn maze shriek-tacular, but that blood-curdling scream wasn’t due to your performance.

I was actually looking at my phone and saw a general poll with Trump edging Hillary by 2 percent.

I know, I’m terrified as well!

Sure, every single website has Hillary winning the election. But I was told by all my friends and Hillary herself that we couldn’t let up or we might lose. Seeing as I’ve already donated to Hillary’s campaign, phone banked, and voted early, I took this as “check the status of the election every second of every day or Trump will win.”

Also, sorry I gave you literally no reaction while you revved your chainsaw engine in my face. This year, I don’t know — I guess a local actor cradling a blade-less chainsaw isn’t as scary as Trump getting nukes.

But it’s not your fault! You couldn’t have known I just re-watched that Joe Scarborough clip about Trump asking why he can’t use the nuclear stockpile. But I swear, the thought of Trump launching a warhead on a dare and your spinning vroom-vroom dance are like one and two!

For what it’s worth, you aren’t the only one. The drippy Japanese water ghost hanging in the dilapidated bathroom thought she grossed me out when she let gray jelly fall out of her mouth.

Truth be told, that “Ugh, God, why?!” belongs to an update from Politico telling me Ohio and Nevada are still a toss-up. Trust me, I wouldn’t normally drive an hour out of the city and pay $45 to stare my phone but, what can I say, I love a good jump scare and this isn’t a normal election!

Sorry, Chainsaw Guy, That Scream Was For A Poll Showing Trump's Up 2%
Political Halloween Displays 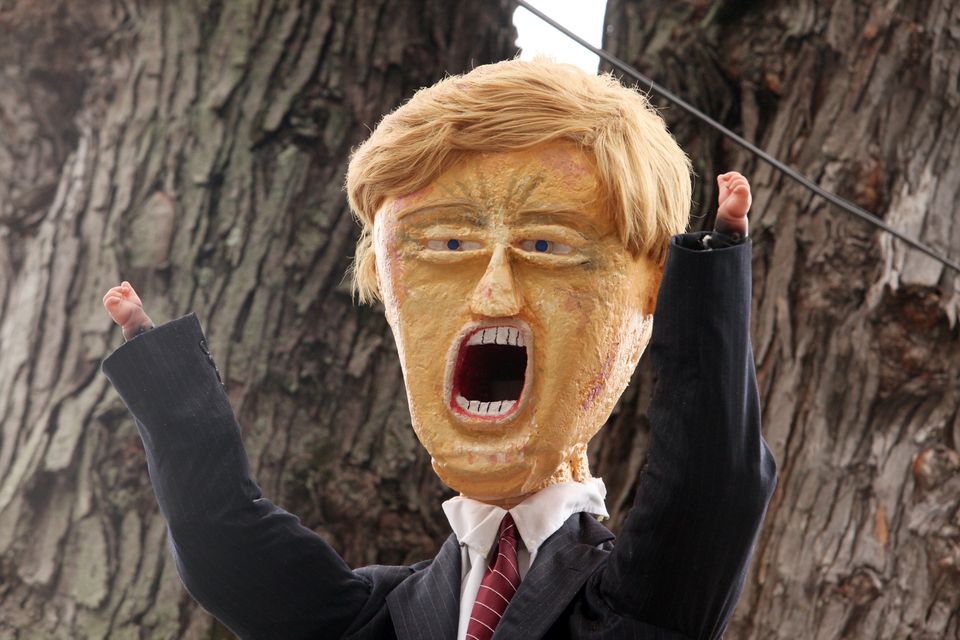 1 / 9
With a little more than a month to go before the U.S. elections on Nov. 8, history professor Matt Warshauer of West Hartford is using his annual Halloween extravaganza to make a political statement.
Michelle McLoughlin/Reuters