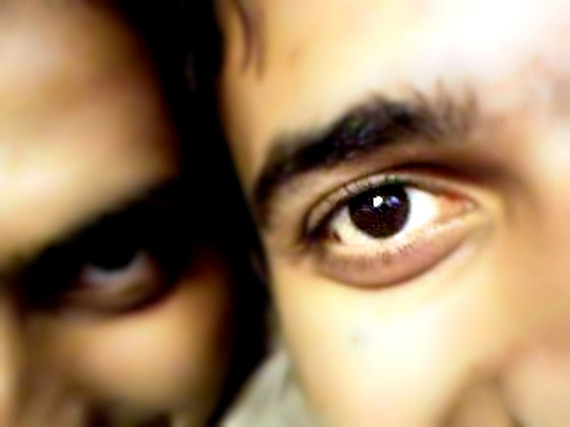 I didn't say it. He did: Nolan,* the guy from Amsterdam who had been living in Bangkok for 10 years. For some reason, he wanted to know if I was attracted to Asian men (my answer: when I found them attractive), and although some things would have been better left unsaid, he felt the need to tell me that he is not.

My first instinct was to ask why he would live in a country where he wasn't attracted to the people, but I'd already met his longtime partner, so I figured that hooking up with the locals wasn't a priority.

My second instinct was to ask him what exactly he found attractive, then. His boyfriend? If I had lined up every man in the room and arranged them from the ones I found most attractive down to the least, starting at the bar, his boyfriend might have ended up somewhere near the bathroom. It wasn't the nicest thought that ran through my head that evening, but that was just my taste.

This was exactly Nolan's response when I suggested that his attitude reeked of racism. Like so many men with the no-Asians dating and hooking-up policies, Nolan hid behind the old "That's just my preference" excuse. He compared his not being attracted to Asians to his preferring men over women. I let that one slide because it was such a ridiculous argument. It was as misguided as equating it to digging brunettes over blondes. Both rationalizations were irrelevant. All sexual preferences are not created equal, and for Nolan to so glibly simplify human sexuality just for the sake of his weak defense against my charge of racism just made him seem deluded times two.

But if we are going to assign labels to what Nolan considered to be preferences, regardless of what determines a person's sexuality (nature vs. nurture), there is already a term in use for guys who prefer men to women -- a word as objectionable for many as being called "racist." And if there were a catchy term to describe blond-chasers, I would have coined it. "Racist" is the operative word to describe someone who would exclude someone from housing, from jobs, from sex, from love, based on ethnicity. Furthermore, no matter how people want to spin it, rejection for being of a certain race stings so much more than being overlooked because of your hair or eye color, or even your gender.

When I carefully considered Nolan's words, though, I had to give him a little credit. He hadn't said, "I would never date or sleep with an Asian guy" (though I'm sure he would have, had I probed). He'd simply made a blanket statement regarding sexual attraction based on race, which was in the same neighborhood but on a different street. Nolan seemed like a smart, decent person, and I gave him extra credit for getting the reference when I mentioned Nolan Ross from Revenge. I certainly hadn't meant to offend him when I called his attitude racist any more than he'd meant to annoy me when he expressed said attitude, but the battle lines had been drawn.

He wasn't entirely unsuccessful in his attempt to defend himself. He did make me think that perhaps I should cut him and all the others who had made similar comments over the previous few months some slack. Though I wasn't going to back down from my accusations of racism, I didn't really see them as the enemy, not the way I had my two redneck classmates at Denn John Middle School in Kissimmee, Florida, who used to chant, "I smell nigger," every time they passed by me.

I didn't know enough about Nolan to measure the degree of his personal prejudice on a scale from one to ten, but I knew he was walking through life -- and DJ Station -- seeing groups and types rather than individuals. In his outright dismissal of Asian men, he was forming a sexual hierarchy based on race, while basically saying that all Asian men are created physically equal with little variation: "A few undesirable physical qualities fit all. I'll put the entire Asian population in a box and remove them from my dating and sexing pool."

Never mind that eye shape aside, there's actually little physical similarity among the men of, say, Thailand, China and the Philippines, and even less among those of Israel, Lebanon, India and Anatolian Turkey (all of which are part of the Asian continent, making their natives just as Asian as the ones to whom Nolan was referring). Shoving them into one box of physical attributes and labeling it "Do not touch" is tantamount to saying that all black people look alike. Sure, we have no control over what we're attracted to, but we can control whether we see people as individuals or merely as belonging to groups that are determined by ethnicity and race. And does rigid adherence in your head to a supposed "preference" (which, as expressed, often sounds more like a rule: "I don't date [insert ethnicity, race or nationality here]") become almost self-fulfilling in practice, to the point of exclusion?

Can an employer who will only hire white employees because he or she prefers to work with them, or a landlord who will only rent to white tenants because he or she prefers to live with them, use "preference" as a loophole to sidestep charges of racism? Of course not. Why, then, do people think the rules of racism don't apply to them when they're eliminating entire continents from their romantic prospects based entirely on ethnicity and race? Because they can't face legal charges of discrimination for their preference?

The highly evolved modern man thinks outside boxes and beyond ethnicities, not limiting himself to what he prefers. There's a difference between liking one thing more than another and dismissing either of them out of hand. "I am not attracted to Asian men," like "I don't like broccoli," is less a statement of preference than one of taste. People's tastes, like their preferences, aren't necessarily static, as anyone who grew up hating ice cream (or broccoli) but likes it as an adult knows. Isn't that the whole point behind an "acquired taste"?

If you can't, or won't, think outside boxes and beyond ethnicities, at least be courageous enough to face the uncomfortable implications of your color vision. "Jeremy, I think I might be racist: I'm just not attracted to Asian men," a German friend in Berlin once confided in me, earning my respect, if not a free pass. "Sorry, I just don't find them attractive," with no interest in self-reflection to determine why, is a cop-out. P.S. This applies equally to so-called "chocolate queens" and "rice queens" and "whatever queens" who shun white men. Racism isn't just about rejecting minority groups or persecuted ones.

Before I met Nolan, I would have imagined that someone who had been living in Asia for a decade would have realized that the contents of the Asian box are as varied as those of the white, black or Latino ones. But Nolan and people just like him were too busy using their "preferences" as an excuse to exclude an entire continent of people from the list of guys they would consider dating to see the variety among Asian men.

I'd become accustomed to that attitude in Australia, where the Manhunt profiles of guys who approached me would sometimes include the words "No Asians" or "Whites only" (the latter of which was once explained to me as a response to an inordinate number of Asian suitors). I'd anticipated more enlightenment when I first came to Southeast Asia on an extended holiday after four months living in Melbourne, but it was actually worse, with Asian-on-Asian racism being as rampant as black-on-black racism in the United States (and European/white Argentine vs. South American/brown Argentine racism in Buenos Aires) and highlighting the social ill in bright, shocking pink. I told Nolan that I found comments like his particularly offensive because as a gay black man, I'd spent much of my life hearing similar sentiments in the United States, only they were usually aimed at people like me there.

This form of non-gender-related sexual discrimination against the locals in Asia felt equally inappropriate, perhaps more so: They were being insulted by visitors in their own home. I couldn't condone "Whites only" in Australia, but I understood that some of it came from a territorial place. It was partly the manifestation of resentment of a minority that was growing larger every year. But there is no excuse for relocating to a country to benefit from it economically (or for whatever personal reason), descending upon the gay scene, and then basically saying you don't like the way the locals there look.

En masse, it sometimes felt like small-scale colonialism, with the European male in the position of sexual power -- everybody wanted him. As I watched the division of ethnicities at DJ Station (Asians on the ground floor, Europeans on top) and listened to people like Nolan constantly voicing the racial limits of their attraction, I wondered what the future might hold in an increasingly mobile, diverse and app-obsessed gay world. With Grindr and Scruff and other online meat markets overtaking bars and clubs in boy-meets-boy preeminence, would virtual "walls" of segregation and apartheid (Edit Filter) one day replace velvet ropes as the number-one way to keep out the undesired?

Hadn't history taught us anything?

This is an excerpt adapted from my forthcoming memoir, Is It True What They Say About Black Men? Tales of Love, Lust and Language Barriers on the Other Side of the World. A document of my life after New York City as an expat in South America, Australia, Asia and, finally, Africa, the book will be available this fall.

*Not his real name.