That a candidate for the Supreme Court needs empathy, as Obama emphasized, is almost too obvious to pay attention to. Because apart from psychopaths, all humans are endowed with empathy, which is the capacity to be affected by the emotional states of others, and to become part of their situation. I can see how conservatives won't see much need for it, because their ideology tries to operate without empathy, such as when Rush Limbaugh mocked Michael J. Fox's Parkinson's symptoms or when Missouri Representative Cynthia Davis opposed school lunches, opining that "hunger can be a positive motivator." These are great examples of what happens when empathy is in short supply.

Empathy is an ancient capacity that evolved to keep animal societies together. It is often ignored in political discourse -- which loves to stress the benefits of competition -- but nature is full of group-living animals marked by mood transmission and sensitivity to others. They survive by being in tune with each other. Empathy is found in all mammals. Everyone is familiar with the way mammals react to our emotions, and the way we react to theirs. This creates the sort of bond that makes millions of us share our homes with cats and dogs rather than iguanas and turtles, which are just as easy to keep, yet lack the empathy that we need to get attached to them.

Simply put, then, Obama is looking for a mammalian candidate, whereas the Republicans would be perfectly happy with a fish or crocodile.

Empathy is a well-recognized political factor. The French revolutionaries chanted of fraternité, and Theodore Roosevelt glowingly spoke of fellow feeling as "the most important factor in producing a healthy political and social life." Abraham Lincoln's opposition to slavery was partly inspired by him having encountered shackled slaves in the south, the memory of which continued to make him feel miserable years later. Lincoln was in fact such a sensitive soul that his empathy extended to other creatures. As one famous story goes, he halted his carriage to attend to a squealing pig mired in a mud hole, and dragged it out while soiling his good pants.

Animal studies on empathy are on the rise, including the way rodents are affected by the pain of others. Laboratory mice become more sensitive to pain once they have seen another mouse in pain. Pain contagion occurs between mice from the same home box, but not between mice that don't know each other. This is a typical bias also known of human empathy: the closer we are to a person, and the more similar to them, the easier our empathy is aroused.

The same bias is known of pair-bonded birds. For example, rooks reassure their partner with friendly bill contact after he or she has engaged in a fight with another rook. And geese equipped with implants that measure heart rate show a sharp acceleration while watching their partner confront another. Even if they stay on the sidelines, they seem to identify with the other's predicament the way we do when we see our child getting punched by another.

Chimpanzees go further in that they show an actual understanding of what is happening to others. The most typical expression of empathy occurs when one chimp gently embraces a distressed party. Victims of aggression are quickly surrounded by others, such as family and friends, who put an arm around them until they stop screaming. But chimps also show more complex helping, such as when a male at a zoo carefully unwrapped the ropes from around the neck of a juvenile who was about to hang itself, choking in silence. Like us, these animals can take another's perspective. 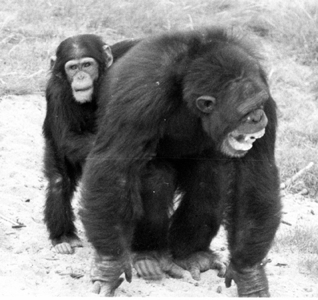 A juvenile chimp embraces an adult, who is screaming after having just lost a fight with the alpha male. Consolation is common in apes, and has been shown to have a calming effect.

But if empathy comes with built-in biases isn't this a problem for a Supreme Court Justice? Isn't justice supposed to be blind? That depends. If society treated everyone equally, there would indeed be no need to have judges who are more sensitive to one group or another. But who believes that American society provides a level playing field? Rich kids go to rich schools and poor kids to poor schools. Health insurance is not available to everyone. And the prisons are full of suppressed minorities. To find a judge whose background and gender make her more sensitive to existing inequities, and who empathizes more with the weak than the strong, seems hardly a luxury.

More on the evolutionary roots of empathy and its relevance for modern society in my forthcoming book The Age of Empathy (September, 2009 - Harmony Books).