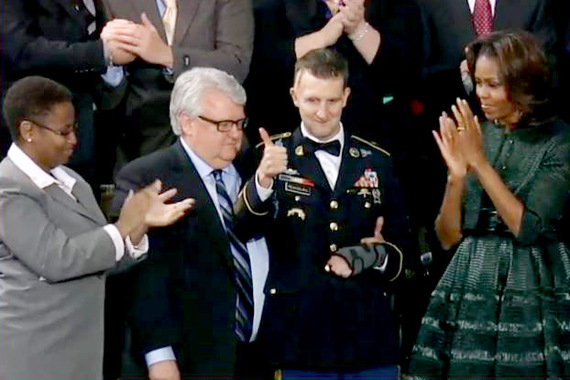 Even before the president started to deliver the State of the Union (SOTU) address, many had watched the uniformed soldier slowly and carefully make his way down the steps of the House gallery to take his seat in the front row, next to where first lady Michele Obama would soon be sitting.

During the president's address, Americans would get to see shots of this Army Ranger sitting or standing next to the first lady, sometimes applauding with some difficulty at something the president said.

But it wasn't until nearly the end of the SOTU address that America would get to know who this soldier, blind in one eye and with only partial use of his left side, really is.

And it was after the president told Americans the moving story of Sgt. 1st Class Cory Remsburg that the entire House Chamber came to its feet and offered a rousing ovation to the Army Ranger -- longer than any I remember in recent years.

The president's mention of Remsburg came after he honored our veterans and promised to ensure that they would receive "the benefits they've earned and our wounded warriors receive the health care -- including the mental health care -- that they need" and that his administration will help all our veterans by translating their skills and leadership into jobs and by continuing to "join forces to honor and support our remarkable military families."

Looking up at the gallery where Army Ranger Cory Remsburg was sitting next to the First Lady, the president said, "Let me tell you about one of those families I've come to know."

And he did tell us:

"I first met Cory Remsburg, a proud Army Ranger, at Omaha Beach on the 65th anniversary of D-Day. Along with some of his fellow Rangers, he walked me through the program, the ceremony. He was a strong, impressive young man, had an easy manner. He was sharp as a tack. And we joked around, and took pictures, and I told him to stay in touch.

A few months later, on his 10th deployment, Cory was nearly killed by a massive roadside bomb in Afghanistan. His comrades found him in a canal, face down, underwater, shrapnel in his brain.

For months, he lay in a coma. And the next time I met him, in the hospital, he couldn't speak; he could barely move. Over the years, he's endured dozens of surgeries and procedures, hours of grueling rehab every day.

Even now, Cory is still blind in one eye. He still struggles on his left side. But slowly, steadily, with the support of caregivers like his dad Craig, and the community around him, Cory has grown stronger. Day by day, he's learned to speak again and stand again and walk again, and he's working toward the day when he can serve his country again.

'My recovery has not been easy,' he says. 'Nothing in life that's worth anything is easy.'

Cory is here tonight. And like the Army he loves, like the America he serves, Sergeant First Class Cory Remsburg never gives up, and he does not quit."

Here is when the president asked Cory to stand up and when the extended cheers and applause took place. 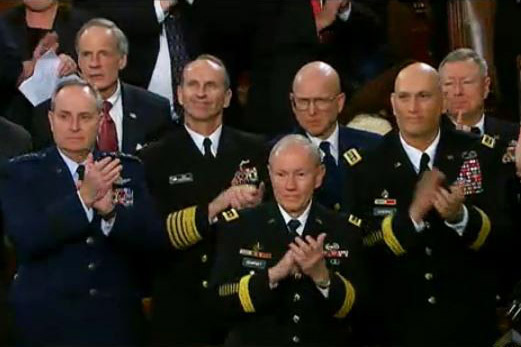 When the applause eventually faded, the president continued:

"My fellow Americans -- my fellow Americans, men and women like Cory remind us that America has never come easy. Our freedom, our democracy, has never been easy. Sometimes we stumble; we make mistakes; we get frustrated or discouraged."

Recalling how for more than two hundred years Americans have "placed our collective shoulder to the wheel of progress...so that the words set to paper by our founders are made real for every citizen," the president once again honored Remsburg: "...if we work together; if we summon what is best in us, the way Cory summoned what is best in him, with our feet planted firmly in today but our eyes cast towards tomorrow, I know it's within our reach.

With "God bless you, and God bless the United States of America," the president concluded a most memorable State of the Union address.

A speech and an evening that, as Russell Berman at The Hill says it best, "belonged to the Purple Heart recipient in the first lady's box."

Lead photo: Army Sgt. 1st Class Cory Remsburg gives a thumbs up to the audience, which applauded after President Barack Obama cited him during the State of the Union address. DOD screen shot.