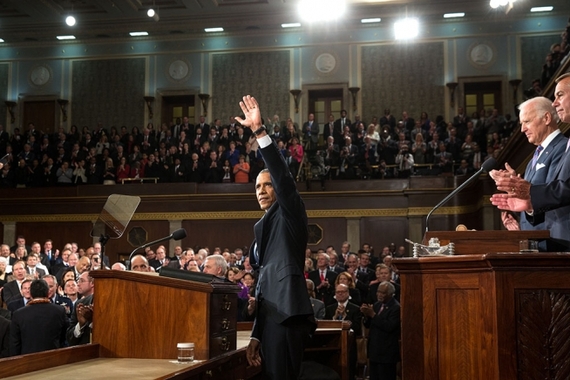 I don't need to add to the abundant commentary published in the Huffington Post, as well as elsewhere, on the substance of Barack Obama's State of the Union address, especially what he avoided truly addressing on income inequality, the crimes which the "criminal-justice" system and segments of its policing arm commit against people of color, other social justice issues, the real conditions for creating peace, or the environmental catastrophe.

But I can address what was hardest for me to listen to — all the stuff that actually sounded good, that he said he wanted to work with Congress to accomplish:

When I was in high school and college, there was a certain ambitious breed of student politicians who ran for class office by making up stuff to say they would work for. The problem was that the jobs were basically figurehead positions, giving the officeholder little or no power to change anything about how the school was run. The candidates knew that, and their insincerity, the lack of heart in their words and slogans, was palpable.

I had the same feeling listening once more to the President who, in 2008, was telling us he would bring change we could believe in.

Barack Obama, as Michael Winship wrote in his HuffPost piece on SOTU, despite "occasional oratory to the contrary, . . . is tucked well under the corporate wing of his party, mightily beholden to the investment sector he occasionally decries to maintain his credibility." He has had six years when he could have barnstormed, building support for the measures he is urging now. The first two of those years, both Houses of Congress were majority-Democrat, and for all of them the Senate was in Democratic hands. And he entered office having built a grass-roots campaign organization which he and his people could have continued to strengthen and grow into a real movement. But Barack Obama is the best a corrupt system has to offer, not one to upend that system.

So now, with a Congress fully in the hands of a Republican Party increasingly dominated by its right wing, he can make all the ringing proclamations he wants to about taxing the rich to help the middle class. (Phyllis Bennis points out that, in a country where 50% of the children in the nation's capital are living in poverty, the President spoke of the middle class but never mentioned the poor.) He can look like he is belatedly providing real leadership on a minimum wage which, adjusted for inflation, is at 70 percent of its 1968 level, and all those other nice things he is asking the Republicans to give us. Savvy Democrats will follow suit, hoping that the teeter-totter of the two-corporate-party system will shift in 2016 to its less overtly outrageous side. But none of it is going to happen, and the interests to which office-holders from both parties are beholden, i.e., the people who benefit from the status quo, remain unthreatened.

The biggest problem [with the election outcome] is that the two-party system fools more of the people more of the time when Republicans are in power and Democrats can pose as the progressive alternative. In this case, the Obama Administration will get even more cover than it has so far for its militarist, pro-Wall-street, surveillance-state, and, yes, even pro-fossil-fuel agenda.

And that's why now our President sounds like a high-school slinger of B.S. as he offers palpably empty hopes in the face of a Congress which does not pretend to be on the same page. In his impotence he is free to pose as whatever he wants to look like.