Waiting for the State of the Union instant polls and dial group reactions? Maybe you shouldn't. Another survey quantifies the nation's pessimism. And if you've still got time for more pre-SOTU analysis, we've got plenty of links. This is HuffPollster for Tuesday, January 28, 2014.

WHITHER THE INSTANT POLLS? - For decades the annual State of the Union rituals have included one or more instant polls to gauge reactions. Because these efforts interview just speech watchers, not the the full population of adults, they typically skew towards fans of the President (who are more likely to watch the speech). Last year, for example, Democrats made up 44 percent of the speech audience sampled by the CNN/ORC instant poll, while Republicans were just 17 percent and 36 percent were independent. As we reported in 2011, these polls also tend to show an overwhelmingly positive reaction to the speech that seldom translates into lasting, measurable "bump" in support of the President or his policies. [CNN, HuffPost] 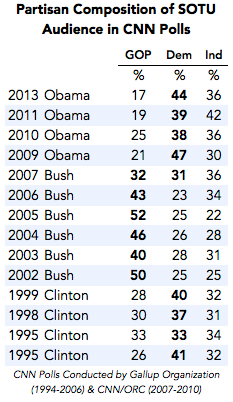 Criticized... - The instant polls have been the object of criticism, summed up earlier this week by political scientist Brendan Nyhan: "rather than wait for post-SOTU polling to determine if the president’s approval numbers have changed, many media outlets use scientifically dubious instant polls of people who watched the speech. These are not a valid representation of public opinion since the speech audience is a self-selected group and contains a disproportionate number of supporters of the president (because those who like the president are more likely to tune in). In addition, it may be difficult to contact people quickly; polls typically take several days to complete in order to allow time to call people back who do not answer." [CJR]

...and fading? - Television networks rarely pre-announce their plans regarding upcoming surveys, so we will have to wait to see what they report tonight. That said, CBS News, which released post-SOTU instant polls from 2005 to 2011, has not done so for the last two years. And CNN, which has been doing quick reaction polls since the 1990s, skipped their post-SOTU poll in 2012.

Focus groups and worse - Some news outlets and partisan organizations stage focus groups to measure reactions to the speech. As HuffPollster wrote five years ago: "Regardless of the sponsor, the focus group usually involves a group of 20-40 adults gathered in a central location selected by some hopefully-representative-but-not-random method. A moderator talks to the group before and after the debate. Sometimes the members of the group provide their feedback throughout the speech using a dial, with the aggregate scores of the dials appearing as rising and falling lines on the television screen. Ideally, focus groups provide 'qualitative' insights that are tough to glean from standardized 'quantitative' survey questions. The problem is, they are not random samples, and the discussion is sensitive to the 'group dynamic' set by the moderator or the most verbose participants." [Pollster.com]

Leading the audience? - Yesterday's HuffPollster linked to a political science experiment to test the impact of the dial-test "worm," the rising-or-falling graphic representation of instant responses, shown during a candidates debate in the United Kingdom. The researchers intentionally manipulated the lines to favor one of the candidates. Their conclusion: "The majority of viewers were unaware that the worm had been manipulated, and yet we were able to influence their perception of who won the debate, their choice of preferred prime minister, and their voting intentions. We argue that there is an urgent need to reconsider the simultaneous broadcast of average response data with televised election debates." [PLOS One]

Dial tests of the self-selected - The latest innovation in "dial tests" involves using the internet to expand participation from a handful of participants in a single location to hundreds of thousands or even millions of participants nationwide. The biggest challenge is the the samples are entirely self-selected. News organizations invite their audience to participate, have little or no control over who responds, and so the resulting sample is not likely to be representative of anything beyond those who choose to participate.

Worst of all worlds? - The latest advance combines a self-selected sample drawn from a heavily partisan audience with the potential to lead that audience to a conclusion. Hayley Tsukayama: "Microsoft’s search engine is pulling out its Bing Pulse tool for the second year to record real-time audience sentiment during President Obama’s big speech. The online voting tool allows viewers to express their opinions about the speech using a smartphone, PC or tablet. Those watching the graphs generated by Bing Pulse will be able to see how viewers feel about the speech and which moments of the address generated the most votes — what Bing calls an 'intensity score.' Real-time reactions from the polls will be displayed on the FOX News Channel. This year, Microsoft is adding some new functions to the tool, including an annotated graph feature that will allow viewers to click on spikes or dips in the real-time graphs to see the issues being addressed during the speech that have prompted major reactions." Microsoft's press release notes that the Bing Pulse "the Bing Pulse received 12.9 million votes" during the 2013 SOTU.
[WaPost, Microsoft]

THE STATE OF THE UNION IS PESSIMISTIC - Mark Murray: "As President Barack Obama enters his sixth year in the White House, 68 percent of Americans say the country is either stagnant or worse off since he took office, according to the latest NBC News/Wall Street Journal poll. Just 31 percent say the country is better off, and a deep pessimism continues to fuel the public's mood. Most respondents used words like “divided,” “troubled,” and “deteriorating” to describe the current state of the nation. On the eve of Tuesday’s State of the Union address, more than six-in-10 Americans believe that the nation is headed in the wrong direction and 70 percent are dissatisfied with the economy." [NBC]

-The White House will stream an "enhanced version" of the SOTU "that features graphics, data and charts that help explain policies and the issues." [WhiteHouse.gov]

-A Wall Street Journal interactive compares past State of the Union speeches. [WSJ]

-Benjamin Lauderdale shares the political ideology of State of the Union addresses since 1986. [WaPost's Monkey Cage]

-PPP (D) finds Democrats in trouble, but more in line with the public on issues like increasing the minimum wage. [PPP]

--------ADVERTISING--------
Rasmussen Reports – Help Wanted. Rasmussen has a new position open for a senior data scientist/statistician to help lead us into the future of public opinion polling in a way that relies less on land lines and more on a combination of the various media channels available today. If your background is in statistics, mathematics and programming and you have a vision for the next wave in public opinion, please apply. Love of politics and policy a plus. Job listing and more details here.
-------------ADVERTISING------------

TUESDAY'S 'OUTLIERS' - Links to the best of news at the intersection of polling, politics and political data that we missed during our holiday break (starting with a few
new items from today:

-Reid Wilson breaks down the polarization in state legislatures among the 50 states. [WaPost's GovBeat]

-An ABC/Post poll finds support for the Tea Party remaining steady over the past year. [WaPost]

-Jon Krosnick and colleagues find evidence of leading language overstating the partisan divide on a question of whether Barack Obama was born in the U.S. [Stanford]