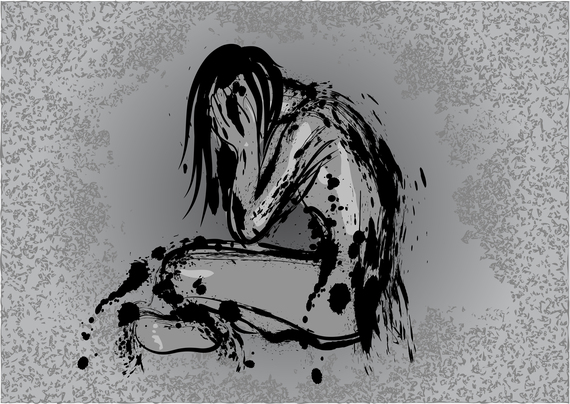 It's been quite a week for me -- I had an unexpected visitor. I know when soul sadness shows up immediately; I'm engulfed by a hollow emptiness. A knot is embedded in the lining of my stomach, along with an inability to catch my breath and tears that fall without warning. Advance notice is not provided when soul sadness visits; it just bursts into my home, uninvited and in the past unwelcomed and numbed by the eating disorder that later followed in its footsteps. The duration of the stay is uncertain and often variable -- no notable rhythm or pattern evident.

Soul sadness is different than situational sadness, which is identifiable and easily recognized. Situational sadness is delivered with a context, folded up in a manila envelope; it can be pointed to and readily described -- a lost opportunity, a breakup, anguish over your hurting child. Conversely, soul sadness is a rip current that sucks you under the ocean's surface unexpectedly -- frightening and disorienting.

Soul sadness reminds me of the legend of Shadow Lake on Roosevelt Drive where I grew up. Lost are things and people into this bottomless lake never to be found -- or so they say. The brokenhearted reside there.

Deep down, even though I dreaded it, I knew that I needed to go the source of my broken-heartedness. No matter how deep I swam and searched that murky brown water, my breath held tight, I couldn't locate the source of the pain that I knew was there. It was maddening so I gave up and surfaced, gasping for air, just as helplessly uncertain as before. Unable to be anchored, I unknowingly adopted a new form of misery to cope with the distress of the unidentifiable sense of barrenness. I starved the melancholy, ate the sorrow, purged the grief and then attempted to outrun them all on dark sleepy streets.

Protected in the safe sanctuary of the therapy nest I discovered many years later, I found a diver that could swim with me in those haunted waters. She held my hand as we dove deeper and deeper down into that sorrow-filled place. We peered around and found remnants of the brokenhearted little girl that had drowned there 20 years ago. She was 8 years old with long golden blonde hair that still, even after all of those years and the muddy water that surrounded her, had light reflecting from each strand. Her sweet body, illuminated by the light, revealed a long nightgown tangled around her with a broken locket in her delicate hand. Together, we worked relentlessly to release her from the grips of gnarled branches and debris. These were the darkest of days that bled into agonizingly lonely nights.

I was wild and unable to be tamed or contained, oozing with neediness and fear. My therapist, willing to venture into controversial waters held the desperate lost little soul; comforting and regulating her through soft pats and a soothing voice until we could fully disentangle her. Once freed, I was able to swim the tiny lifeless body to shore. I carried her into the woods and gently laid her body in a nest of white flowers under the long tendrils of a weeping willow.

There was no saving this precious girl, her childhood was robbed from her; there was no denying that grim reality. So with reverence and great care, I wept over her. Grief consumed my heart and soul as I inventoried the injuries on her small body. Naming her scars, one by one, I cleaned and bandaged them, although I knew they would never truly heal. I washed her body and long golden hair, dressing her in a clean nightgown with pale pink flowers. Hair brushed and strawberry scented lotion on her skin she looked as though she could rest more peacefully now.

Kissing her rosebud lips, I wrapped her in my arms and told her how sorry I was that her tender spirit was abandoned for so long. I promised I would care for her from now on and brought her home. Honoring and caring for this broken child allowed me to come to terms with the tragedy that dismantled her. The one that 30 years later still has aftershocks.

There is another 8-year-girl that lives down the hall from me now. I carried her for nine months, gave birth to her, and nursed her chubby cherub body for a year. With long blonde hair and a carefree spirit she dances and twirls through my heart and home. My beloved daughter who holds the wisdom of the old soul she was knitted with in heaven. 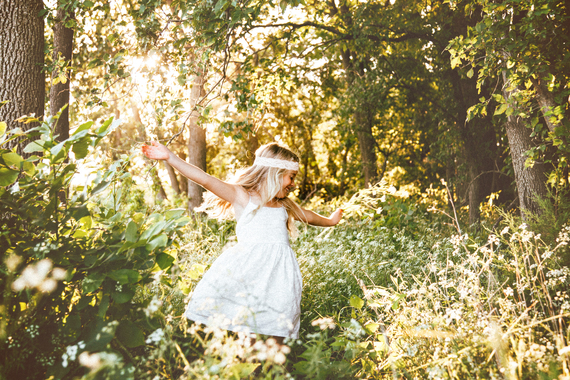 Mothers have limited ability to protect their children from the hurt they will endure. As I kiss my daughter's rosebud lips, long after she's fallen asleep, I quietly promise her that I will do my best to keep her childhood intact. To the degree to which I get a vote, I will not strip her of that birthright. She will not be the parentified creature bearing the impossible task of managing the emotional wreckage of those she loves the most. The link in that chain is now broken.

Forgiven is the mother that lost the little girl so long ago. My heart has come to understand with compassion, as I searched those dark waters that she was there too. She was just a teenager though and was incapable of helping me. Her adolescence interrupted and stripped from her the day she returned home to glaring sirens outside her childhood home. Suicide burst into her home that day and she was never the same. We share the story of a broken foundation, as well as a love for each other far deeper than the bottomless lake.

Forgiven too is the determined boy that dove into the water to rescue my mother from her despair in what seems to all, a lifetime ago. No wedding, baby girl or boy, or grand two-story home could soften the truth that their union would not last. Perhaps the work he buried himself in and the control he tried to assert further drove the wedge between them. My grandmother said, "Your mother was left alone too much and then a wolf snuck in during the night," and the family with the two blonde-headed children was no longer.

So my soul sadness, I know you are back to tug at my insides. You won't stay for long and you'll likely always return; albeit inconsistently. My door will open as I greet you and help with the luggage you are sure to bring along. Each visit, the bags are lighter and unpacked with more ease than in the past. The hurt you bring with you still cuts me off at the knees initially, but I stand up again and turn on the kettle to make some tea. We sit for awhile and cry together.

I've come to understand my soul sadness and at times am able to identify what prompts the visit, but not always and I'm more at peace with that now. This is but only one part of me and I don't resist it anymore. I'm gentle and loving with myself when this sadness washes over me -- just as I was with the little me that died so long ago. And then, I move back into my life until the next visit, no longer swept under the current.

Soul sadness is part of the story of recovery for all of us. It is remiss to think we can interrupt the behaviors that mask it for any real length of time unless we are willing to find our guide and ease into the water. My hope for you is that you'll give up the desperate attempts to numb the pain and instead, invest in the pursuit of your healing.

'Cause you're a hard soul to save,
With an ocean in the way,
But I'll get around you.'

Florence + The Machine, "Over the Love"

More:
Parenting depressionmental illnessGPS For The Souldivorce
Newsletter Sign Up
An essential daily guide to achieving the good life
Subscribe to our lifestyle email.
Successfully Subscribed!
Realness delivered to your inbox