Once the house of New World glory, Arthur Miller discovered inspiration in Salem's story. Today, there's nothing to be found but a soul-selling despair in this home of American kitsch.

It was standing room only: The carriage was full to the gunwales. An owl, perched on the seat opposite, peered at me with a mocking menace. Perhaps I should be more specific. A woman, dressed as an owl, peered at me with a mocking menace. Next to her sat a Steam Punk villain in Doc Martens and a face partially concealed by what looked to be a modified colander. It may have been a gimp mask, but I didn't think it polite to ask.

Across the aisle there was a witch. Next to her a child in a pumpkin costume and a baby dressed as a strawberry. A group of thirty-somethings sporting superhero costumes lingered nearby making small talk with a brace of sorcerers. Christ, there was even someone dressed as a Tardis.

It was the kind of scene Huxley could have dreamt up between barbiturate binges or after a heavy honk on his crack pipe. And there I was, sitting center stage in this bizarre, Brechtian performance.

But I wasn't just a passive spectator to this sinister show -- I was implicated in it. For though I didn't share my fellow passengers' enthusiasm for a jolly good game of dress-up we, depressingly, did share the same destination. 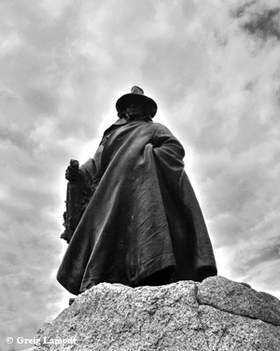 As far as New American settlements go, Salem's pretty much as old as they get. In the beginning there was Jamestown, Virginia. Thirteen years later, and the Pilgrims founded Plymouth in 1620. Come 1626 and Roger Conant, a Devon-man by birth, London-man by trade, and randy old rascal at heart (he had ten children) had struck out on his own with a troupe of intrepid explorers. Disillusioned with the violence and religious fanaticism that plagued the early colonial settlements, he set up shop in Salem in search of peace, stability, and prosperity.

By all accounts Salem's story is a remarkable one. It occupied a carotid role, both geographically and politically, in the American Revolution on both the patriot and loyalist sides. It was a global pioneer in seafaring commerce, becoming a world trading hub with Asia in the 18th century. By 1790 it had risen from its inauspicious beginnings to become one of the largest cities in the country, not to mention the richest. It's even been credited with creating the USA's first ever millionaire. Salem was the inspiration for Arthur Miller's literary sensation The Crucible, its buildings offer some of the finest examples of colonial architecture in the Northeast, and its claim as the birthplace of the national guard recently received the Presidential seal of approval.

Yet, despite this glorious genealogy, this historical pedigree, its cultural lineage, its tradition, and its heritage, today Salem has been reduced to prostituting itself to oddballs in costumes who gawk at gravestones and hanker for "museums" filled with broomsticks and bric-a-brac. For all its magnificent past, today it degrades itself by pandering to those whose zenith is having their photograph taken with a transvestite Dracula next to a guitar-playing zombie -- and whose nadir would be to actually learn something new.

Once the house of New World glory, Salem is now the home of American kitsch. Its historic streets are desecrated with tacky shops selling tawdry trinkets, tasteless tit-tats, and worthless gimcracks to the lowest bidder. 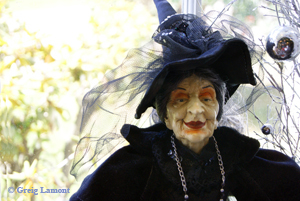 Queues snake out of every tourist attraction with the words "witch" or "ghost" emblazoned above the doorway, while echoes rumble through historical exhibitions in the Old Town Hall. As crystal-gazing clairvoyants made a killing selling their snake oil on the streets, you can hear a pin drop in the Peabody Art Museum. There wasn't a single person marveling at the 171-foot, three-masted replica of the 200-year-old Friendship -- not even someone who'd mistaken it as a nautically themed restaurant.

Of course, it's not all the public's fault. At points it seemed like Salem was hardly keeping up its side of the bargain. All roads in Salem lead to the Common, but whilst the Romans were kind enough to stick up a Colosseum in the heart of their conurbation to keep weary travellers interested, all it could be bothered to put on was a children's pumpkin carving display. There is something curiously satisfying about judging the efforts of a child, from tutting at the lackluster impasto of a potato-print painting to complaining about a dropped stitch in a Top Shop cardigan. But when you're supposedly in the heart of "historic" America, you can't help but ask yourself "is that it?"

The indictment that the New World doesn't know how to do history, how to handle heritage, that it simply doesn't get culture, is an accusation as old and tedious as the World that makes it. As a thesis, it's sustained only until you realize that those who make it have even less knowledge of history, heritage and culture than those in the very World they disparage. But, having trodden Salem's streets during the height of Halloween, it's difficult not to think they may have some kind of point.

The trouble is, it's not just America that gets these things so utterly, hopelessly wrong. The whole world does it -- the New as well as the Old. At every twist, at every turn, we stumble upon value and desecrate it, grasp the precious and destroy it. From the cities we live in to the food we put in our mouths. Someone's calved it, reared it, fed it, loved it, milked it, killed it, packaged it, shipped it, butchered it -- and the best we can do is make a $1 burger out of it.

In The Crucible, Reverend John Hale, Miller's man-of-the-cloth come witchcraft-consultant, paints for Judge Danforth a bleak and desolate picture of what Salem, gripped by fear and desperation, has become. Orphans walk the streets, cattle bellow on the highroads, and the stink of rotting crops hangs heavy in the air. Though in Miller's allegory Hale is, in the end, offered a peculiar kind of redemption, Danforth's beloved Salem has yet to be afforded the same dignity.