Contemporary discourse in architecture and design reflects upon the increasing ability to engage the lively part of matter and train this sensibility as not only a broader search for tools as much as an agenda of exploration -- that expands realms of thought on the concepts of information exchange, nature and construction, environment and interaction or collaboration. My own interest in it has been temporarily focused on the flickering merging of the concepts of matter and media through the lens of seeing information as currency in the natural world.

Artist Perry Hall's work has been fascinating architects for many years, and is the intriguing forefront of a new dimension of painting: In his paintings he has developed techniques that  bring or set matter alive again on the canvas, allowing their space and time to be brought inward in a collaboration of discovery.

Located in Great Barrington, Mass., Hall's studio has been a witness and vessel of movements and concoctions that have set in motion such diverse media and material as oil, acrylic, ferrofluid, music, video, film, mobile devices, interactive facades that combine film, painting and architecture. In 2009, his proposal for an interactive painting mural for the new Miami Marlins Stadium in Miami, Fla. was shortlisted for a $2 million public art commission. His work includes the creation of documentary films as well as working as a painter and artist on special effects for feature motion pictures.

On the occasion of the launch of his most recent work -- Sonified, an iPhone/iPad app -- I conversed with Hall about his work and one of the hallmarks of his experience and of Sonified: synesthesia.

Sonified seems like a great convergence of your work as an artist/painter, musician and film maker. What are the main ambitions of the project/app?

Synesthesia, a neurological condition in which a person's senses are connected in an atypical way -- such as "seeing music" or "hearing colors" -- both of which I experience, is the inspiration for Sonified. Sonified is a video camera that translates qualities of light and colors into sound, allowing you to hear what you're seeing. Its a way of using technology to put the experience of synesthesia into the mainstream; anyone with an iPhone or iPad can experience it.

The project combines film making and music; but by connecting seeing and hearing in this unique way, a new kind of sound-vision experience is created. For this first release, I recorded the sounds that the camera controls, but anyone could put their own selection of sounds into it, custom tailor their experience, and craft their own synesthesia. It points to becoming an architect of your own perception. And then there's the recording of these experiences -- a whole synesthetic cinema filmed with Sonified that is waiting to happen, as well as a new music format for artists who literally want to create visual music.

Sonified has just launched; I'm looking for the best development partners. But that's the concept.

A former work of yours -- sound drawings -- dealt with sound as an active operator in painting. Could you describe this work and what motivated its development?

I've been creating my own set of techniques for how to do this since 2000. Sound is channeled into a vessel containing different kinds of paint; by changing, or playing, the sound, the paint transforms and behaves in different ways. I film the images that emerge, and exhibit them as videos, drawings, photographs, but consider it a form of painting, as its solely about using the material of paint itself and what its capable of expressing. And its a completely analog technique, nothing digital is used,

Recently, one of the sound drawings was projected across the exterior of Conwy Castle, covering the entire 200-foot exterior of this medieval castle in Wales. As part of the Blinc festival, thousands of people saw/heard the Sound Drawing -- it was synesthesia shared amongst a large crowd. Also, a kind of painting that literally melded with architecture on a massive, immersive scale.

Your most recent work with ferrofluid, experiments with material self-organization and the position of the artist in this co-developing of the work. Which processes did you engage regarding selections of time and gesture in the making of this work as well as in the Livepaintings -- perhaps an apparent predecessor?

I'm a painter. But I will engage any kind of technique that allows me to make the paintings I want to create, regardless whether its film, sound, digital technology, what have you. I'll do and learn whatever it takes to make the painting. But I keep, at its core, the physical material of paint itself. Because it's beautiful, and smart.

In the case of the Livepaintings, I wanted to make time-based paintings, paintings that change over time and exhibit different kinds of behavior. I had to figure out how to get paint to become animate, and transform. Applying energy to paint is the way to do it. Redesigning, rethinking the composition of paint as a material, how to stimulate/integrate it with specific kinds of energy that allows it to exhibit some kind of intelligence-- signs of "living principles" within it, as Nicola Tesla put it. So I seek out unique, anomalous materials that respond to energy. Ferrofluid, which responds to magnetism, is a liquid I've worked with. In a recent project, Tidal Empire, ferrofluid is added to paint and a kind of mutant magnetic patterning emerges and is "painted" with a set of magnetic brushes.

Carla Leitão is an architect, designer and writer currently living, working and teaching Architecture in New York. Practice and academic works interests in ubiquity and intersection of new media and architecture.
http://www.aumstudio.org
http://www.ubiroom.net 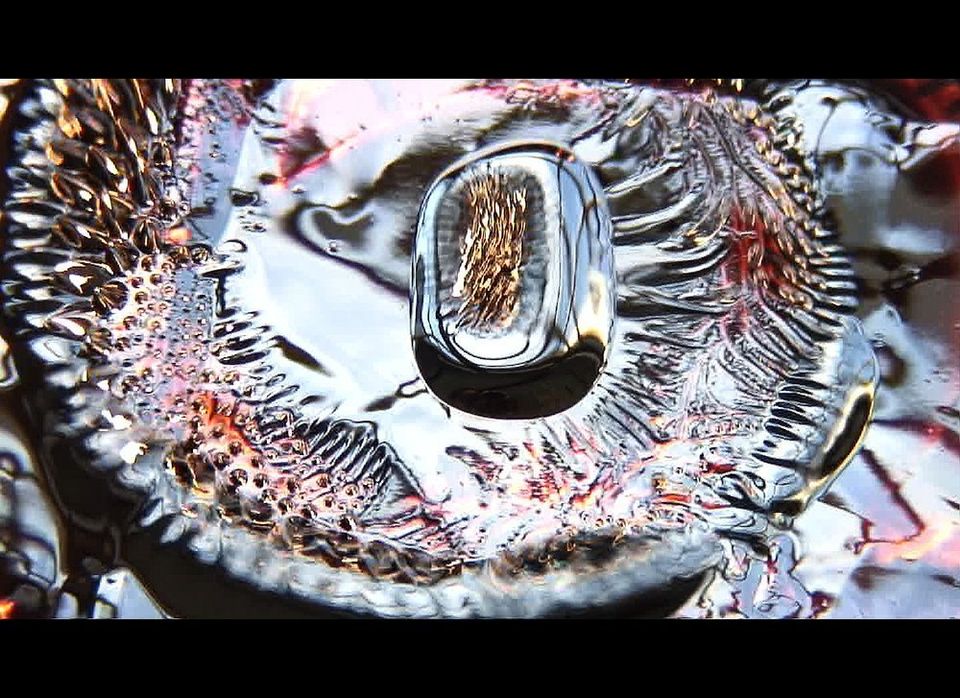