This year marks the 50th anniversary of "The Sound of Music," and in part of the remembrance and celebration, The Huffington Post was able to interview Julie Andrews about what it was like to actually film the now-iconic movie.

Dame Julie is as sweet and dignified as you'd expect, even while discussing the veracity of old drinking legends and how she'll never live it down that she actually made fun of the von Trapp family singers with Carol Burnett at Carnegie Hall, years before starring in "The Sound of Music." Andrews shared a few of the best behind-the-scenes stories with The Huffington Post:

As Tom Santopietro details in his new book, The Sound of Music Story, Julie Andrews was knocked down for about half of 10 takes where she'd walk up the mountain, start spinning and lip-syncing, only to have the helicopter's down draft push her into the grass and mud.

Andrews further explained to HuffPost that it was a jet-engined helicopter and she actually attempted to signal for a wider path that would avoid knocking her down. Unfortunately there was no luck:

It approached me from one end of the field with a very brave cameraman hanging outside of it with his camera and no door. I came from the other end of the field and we approached each other. When we had achieved one take, the helicopter would go around me and go back to the beginning and I'd go back to the other end of the field and we'd do it again, but every time he went around me ... the down draft from a very close helicopter just leveled me into the grass. That kept happening and I couldn't understand why he wouldn't pull away and make a wider circle. I kind of signaled to him, "Could you try to do that," after about four attempts. Every time I bit the dust and all I got was a thumbs up, and, "Let's do one more. Great, great. You're doing fine."

According to Andrews, the helicopter knocked her down just as she turned into the camera, so there's a chance that the footage that makes it into the film of her spinning is right before she was leveled. To top it off, the weather was generally "pretty cold a lot of mornings" during the shoot at altitude in the Austrian Alps.

It's a bit of a legend that Andrews was struggling to play guitar and lip-sync at the same time, as she had never played the instrument before. She would occasionally take a shot of Austrian schnapps before a scene in an attempt to accomplish both at once. Asked about this, Andrews exclaimed, "Oh no! That's a little bit glamorized." She continued:

No, I'll tell you exactly what happened. Learning the guitar and making sure that I got the fingering right -- because it was in the camera's face, as was I -- and lip-syncing also, that was, you know, I'd never played the guitar before, but I learned. And then the schnapps was at the end of one day shooting -- it wasn't necessarily that one, but we were way up in the Alps on a really blustery cold day and the farmer made his own schnapps and very generously handed out a small measure to the people that were on the camera and to all of us. I tell you, for that one moment, we were so grateful because we were so cold. So I think those two rumors got melded into one story.

Andrews denied rumors that Plummer was drinking for much of the time on set and was even possibly drunk during the Austrian music-festival scene:

I don't remember that he was tipsy, because he certainly didn't appear that way. I think in the early days [Plummer] was inclined to say, "Oh, this musical, with songs and love story, it's a little bit saccharine," and so on. But today he's an absolute pussycat about it and says how thrilled he is that he was a part of it. We've stayed tremendously good friends all these years.

Unable to swim, Kym Karath has said she sank and swallowed so much water that she threw up on Heather Menzies, the actress who played Louisa von Trapp. In an earlier take, Andrews successfully fell off the boat forward and caught Karath, but the shot in movie features Andrews' authentic stumble backward. Andrews further explained:

She was only about 5 years old. We were doing the boat scene where we all fall out of the boat and just as we were about to roll cameras ... that's when the assistant director came up to me and said, "I just want to ask you something. Could you fall forwards because the little one doesn't swim? We'd like you to get to her as quickly as you can and we will be doing the same thing off-camera." The boat rocked in such a way that instead of going forwards I went backwards. And there was such panic in my heart because that little girl had gone under a couple times, but everybody got to her, of course. She was very brave and she is with us today as we speak.

Talking about her own fall, Andrews said, "It was very real, believe me." 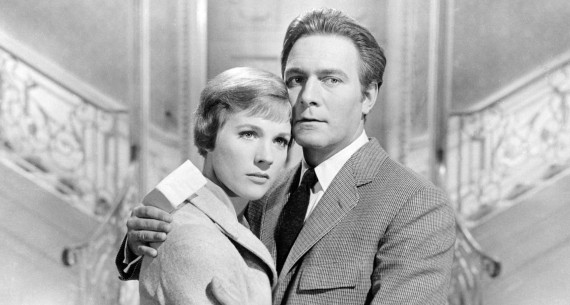 Andrews feels that much of the myth that Plummer didn't enjoy his time on the set and that the two didn't get along was created by the actor at a young age. Andrews said:

I think [Plummer was] trying to be a bit of a curmudgeon. That's his personality and he cultivates it. But in fact he's a darling. And I think maybe [he was] a little nervous perhaps about doing a musical which he may not have done before. And then, you know he was a legitimate, wonderful Shakespearean actor and perhaps he thought that this might be a wrong choice. Of course it turned out to be a perfect one for all of us.

Andrews did say, however, that the two didn't hang out together all too much on set:

In fact, he was not on the film that much in Austria, and we didn't socialize while I was there because I was so busy and I had my new little daughter with me and I had to get up incredibly early. So there wasn't much socializing in that sense.

"The Sound of Music" is very loosely based on the autobiography of Maria von Trapp, The Story of the Trapp Family Singers. Although elements of the love story, the children's lack of musical inclination before Maria's arrival and most of the plot line involving Nazis was fiction, Julie Andrews said the real von Trapp expressed her appreciation for the portrayal of her character while on the set. Von Trapp appears as an extra in the background of the "I Have Confidence" number. Andrews said of von Trapp's visit:

She came and said hello to our director and to all of us. We were introduced. And I believe she said to me something like, "I'm glad you are playing her as a tomboy, because that's the way I was when I was young." A lot of people in Austria wear their traditional costumes and she came in hers and [Robert Wise] said, "Just go in the background and walk across as we're shooting this shot." She very sweetly did and so she's in the movie.

During the early '70s, Andrews had her own show on ABC. In one episode, she had von Trapp on the program to teach her how to yodel. (Apparently, yodeling in the movie was dubbed.) Andrews said:

She came on my television show, a couple of times actually. She really yodels gloriously and I don't think I did at all, so she sort of tried to teach me a little bit. She was a very sweet lady.

There was a brief time when it seemed that the movie might be a monetary failure for the studio due to the bloated production costs, unaided by constant rain in Austria that continuously delayed shooting. Andrews remembered:

There was a lot of rain. Nobody mentioned to the producers that Salzburg has one of the highest average rainfalls in Europe and so we were somewhat unprepared. [...] We ran three weeks late on the movie and I think the Hollywood moguls were very worried about how much money we were spending over there.

"The Sound of Music" would go on to become the third highest-grossing film of all time (with adjustment for inflation) and an iconic part of Hollywood history.

"I think it all had a happy ending," Andrews said.

****
The anniversary is also tied to the Blu-ray and Digital HD release of "The Sound of Music" by Twentieth Century Fox Home Entertainment.