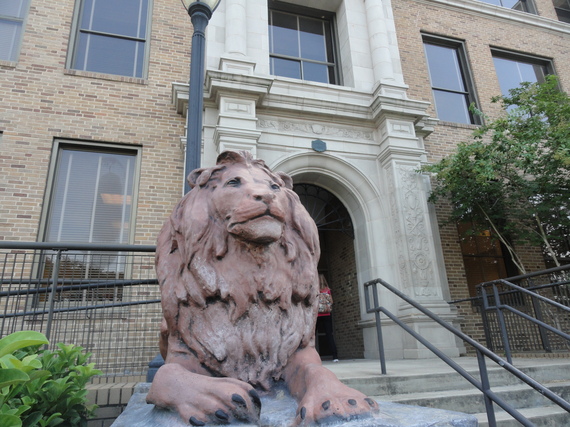 By now, kids are back into the swing of school, reestablishing seats in the cafeteria, slipping prohibited gum paraphernalia into their pockets, and whispering in the hallways about the latest crushes.

But not every kid is skipping off the bus each day.

Military-connected children move three times more often than their civilian peers, so there are thousands of military children in the US and overseas are the "new kids" at school this year.

Although some are excited to be in new schools, many experience stress, fear and sadness. And at one time or another, new kids feel really, really awkward. Trying to find a seat on the bus, getting lost on the way to Science, and wondering who - if anyone - will be your new friend.

Although our daughters have generally benefitted from our moving experiences, our son was quirky. Diagnosed with major developmental delays as a toddler, Hayden was not like his peers. With each move, he was received with mixed reactions. In Germany, he became known as a funny character that everyone wanted to know. In Florida, he was perceived as odd, a reputation he was unable to shake. He ate lunch alone most days, and made no lasting friendships at school. By the end of our two year tour, he was showing symptoms of social anxiety, prompting us to seek medical advice.

Mercifully, Hayden became a veritable celebrity at his last school, where students and teachers thought he was hilarious, uniquely talented, and academically inclined. His status as the only military kid in his class only made him more interesting to his peers, who gave him a standing ovation on graduation day.

It doesn't get any better than that.

But, as I found when I put the issue out on social media, every military family has their own story to tell. I read stories from nearly 50 other military families, about frustration over inconsistent IEP accommodations and inability to transfer test scores. About decisions to homeschool or move the active duty parent without the rest of the family to minimize the social and academic impact on their kids. About tears, trauma, strength and adaptability.

I thought I'd find a general consensus, but instead, I discovered opinions as diverse as the kids themselves.

"Moving was never easy. I spent the first three months of my new base high school in Germany eating lunch alone in the library and holing up in my bedroom AIM-ing my old friends from middle school. I reacted better than a lot of kids I know, whose constant moving around caused them to resort to acting out/trying out drugs and alcohol etc. [However,] I'm super grateful for all of the experiences it gave me and all the amazing families we've been able to meet. I still want to spend a lot of my young adult life traveling, but as soon as I have kids I want to be stationary. I don't want my kids to have to move around, especially in high school." Emma, Air Force child, 22.

"[Changing schools] ultimately makes [kids] better able to handle changes life will throw at us all whether expected and planned for or not. They think on their feet better, make strong, lifelong friendships quickly and learn about the importance of community..." Ciara, Navy spouse, 40.

"My observation is that younger kids may be more outwardly upset, but adjust very quickly. Older kids seem to take longer to warm up to their new surroundings." Amy, Army Reserves Spouse, 45.

"My husband was a Navy brat and did not enjoy going to school and living with friends that always move, for that reason we never live in military housing and [our kids] attend schools with less military ... It works best for us." Krystal, Navy spouse, 32.

"[A] lot of how kids handle change in new schools is how the parents handle the new experiences....They mirror our behavior and can pick up on our stress." Liz, 43, Army spouse.

"[As a Navy kid] I loved moving around the country because if I had a bad experience at one school, I just had to stick it out a couple of years before we'd move on. I feel that it's made me ... able to deal with the stresses of military life. In fact, I'm a little worried when my husband retires and we have to pick a place to live forever!" Karyl, Navy spouse, 39.

Despite the many challenges of changing schools, the good news is that military families are determined to find their own strategy to cope with them. As Army mom, Liz, put it, "Just be there for your kids ... even if it's just to listen and give a positive word of encouragement."

More:
insecuritiesParentsmovingresiliencemilitary kids
Newsletter Sign Up
Raise the kind of person you'd like to know
Subscribe to our parenting newsletter.
Successfully Subscribed!
Realness delivered to your inbox