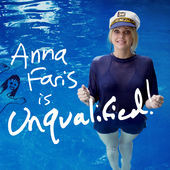 Clear from the get-go is that she doesn't take herself very seriously, often making herself the butt of the joke. And the use of freely flung foul language definitely helps to define this offering as independent media, not likely to be infringed upon by neither studio nor television execs anything soon.

I listened to Episodes 67 and 68 back-to-back because they are parts one and two of her visit with Allison Janney (West Wing, The Girl On The Train), who plays Faris' character's mother on the CBS sticom Mom. Out of the gate, the two launch into an extended insanely scripted bit about an audition, with Janney playing herself and Faris as a casting director that seems drawn from both actresses' experience in show business. Her sidekick/producer Sim fills in the cracks when he's not doing his best to try to keep both host and guest reasonably on track.

There are discussions about Janney's career coming up, and what's it was like to receive a star on Hollywood's famed Walk of Fame ("I felt like I was at my own funeral, because everyone was saying such nice things about me", she remarks.)

Janney goes head-to-head against Sim in a game of "Who Knows Anna Best?" with some very odd questions from the host herself ("What was my first car?") And then, in Part 2, there's time devoted to calling listeners who had written in, wanting answers to relationship questions, topped off with a doozy from Katie -- who had a disastrous date via Tinder, only to discover the interview for her dream internship turned out to be with the very same scumbag a few days later.

The advice given by Faris, Janney, and Sim seems a little counter-intuitive. Hopefully Katie will call back in with a progress report on a future episode - immediately after she reports to HR. 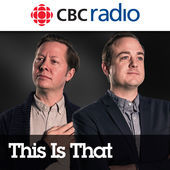 I normally don't bother covering soundcasts that have been repurposed from radio broadcasts. It's not that they're not good, it's just that they can horn in on our alt-media on someone else's time. But someone at work had shared a video of This Is That co-host Pat Kelly giving a hysterical presentation as a "thought leader" from a recent convention in Las Vegas and, when I looked him up, I discovered this show he does along with Peter Oldring.

Other than the internet, I don't think I have ready access to the Canadian Broadcast System so I downloaded the show via iTunes. It's a wonderful and dead-on send-up of a public radio show around current issues...except it's 100% improvised and the issues are - just like so many in the real world - patently ridiculous.

The most recent installment, for example, features a piece on the controversy around leaf raking in the Niagrara area (people should have be be forced to rake up leaves from their trees no matter whose yard they get blown into); a former Canadian Football League 4th stringer who has become a motivational speaker who talks about being a winner just by making sure you stay close to people who are winners; and a thoroughly confusing 7-can plan to establish a national recycling program.

Everything in this show --from the pacing and the recognized cadence of the reporters' voices, to the earnest answers and reactions of the subjects they talk to -- would have you betting this was a legit magazine-style radio show. But it's all ludicrous in the first degree, and a laughable relief to be able to take a break from some of the distressing real news we're getting exposed to the rest of the week.