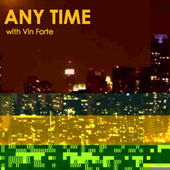 Any Time with Vin Forte
Epi34: I Should Not Have This Power"
[Guest: Daniel Kibblesmith]

Kibblesmith describes his interesting path through the comedy writing world, starting out writing funny copy for Groupon before moving onto The Onion, which led to helping to jumpstart the offshoot and equally phony news-based Clickhole website and then BuzzFeed.

Forte starts things off having Kibblesmith get into the surreal experience that was Colbert's live election night edition on Showtime, where the atmosphere got odder and odder as the results came in and it was becoming clear that Donald Trump was going to be next up in the Big Chair.

There is a lot of delicious delving into the nuts and bolts of Kibblesmith's philosophy of how "world-building" is an essential nugget to create comedy around. As a guy who has written a lot of easily digestible comedy, Kibblesmith comes across as well-anchored and analytical, with a dry delivery that belies the sorts of laughs his material elicits. He's even been putting his stamp on a new medium, writing for Valiant comics.

The episode is an entertaining peek behind a number of scenes where comedy is made. 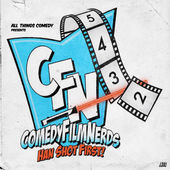 The show kicks off with a recap of Game 7 of the World Series, as Elwood had been over to Pollak's house to view the historic occasion, but then the trio quickly wades into the business of the movie at hand. The two hosts enjoyed the movie, including the fact it was shot in 3D (instead of just having 3D tacked onto a 2D movie.) To be clear, Elwood and Mancini wax on about the movie. Pollak abstains, as he's not only not seen Dr. Strange, but starting from a place where he has little or no knowledge of the Marvel comics and then a dislike for the "Disney-fication" of the properties, he launches in a great rant about how the movies offer little of substance.

He points out that those who are lured in by the visuals-without-heart have been "sucked into the Matrix." Pollak, having directed films (including this year's direct-to-Amazon The Late Bloomer, about an adult male who goes through a late puberty due to a medical condition), has become a discriminating consumer of movies. He sounds dismayed as he answers the question, "What's the last film you through was really great." He begs for time to think, as he points out that he leaves the theater mostly giving an "It was okay," summation to films these days.

Pollak's humor, sharply barbed as ever, really adds to the conversation, continuing on through the show's trademark look at trailers from upcoming films.