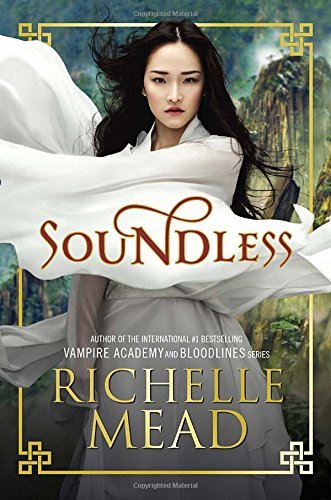 Richelle Mead, #1 internationally bestselling author of the Vampire Academy and Bloodlines series, has released a book based on Chinese folklore. Soundless focuses on a young girl named Fei (a rising artist) and the world she lives in. Fei's sister is blind and her skills as a painter are diminishing just as quickly as her sight. However, Fei steps in whenever their masters aren't looking and paints her sister's assignments to avoid losing her.

An important quality of the society in Soundless is that the people can no longer hear; everyone uses sign language to communicate. Of course, this quality can lead to anything in the book. A big disappointment for me was that the only plot twist was spoiled in the blurb: Fei regains her hearing. I was hoping there would be more in terms of plot twists, but that was all.

Fei later meets Li Wei, a childhood friend, again and the two embark on an epic journey to discover the world that exists under their mountain and find out who is cutting off their food supply. Although Fei and Li Wei had history, Mead made it seem like what readers call "insta-love"; their connection was too quick and took little time to develop. This was yet another aspect of the book that disappointed me. Connections between characters are best when developed slowly and, even if it takes time, the connection is ultimately worth it.

Overall, Soundless was alright. I was expecting more, especially with the hype that was built-up around the story, but it wasn't my cup of tea. However, I do look forward to reading more of Mead's work in the future.