New Orleans is not alone. Catastrophic dam failures are occurring up and down the Mississippi watershed today in the "Flood of 2008," which has the potential to eclipse the Midwest flood of 1993 in tragic consequences. In Lake Delton, Wisconsin, an Army Corps of Engineers' embankment failed, emptied a 267 acre lake that was the centerpiece of a recreation area, and the torrent of water destroyed homes while carving a new channel into the Wisconsin River. Underground sewer lines were shredded and raw sewage isn't seeping, it is poring out of the broken system and entering the watershed. Wisconsin Governor Jim Doyle said the Federal Emergency Management Agency would have teams in the state Wednesday to help assess flood damage. Given FEMA's track record in New Orleans, Wisconsin should not rest easy. 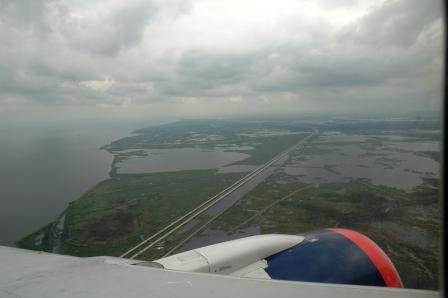 All of the water from where I sit at my desk ends up here on the Mississippi Delta.

"No Idea" What the Corps is Doing

In Cedar Falls Iowa, spokeswoman Susan Staudt told The Huffington Post earlier today (Wednesday) that volunteers and sandbags appear to be holding back the waters of the Cedar River.

Staudt spoke to The Huffington Post from a cell phone in Cedar Falls City Hall at 10 a.m. She said the skies "looked ominous," and that it was raining. "Quite frankly, the only forces keeping the water from breaching the barriers are the thousands of volunteers who are sandbagging," she said.

Staudt's biggest concerns now are the boils which are cropping up all along the levee. What about the Army Corps of Engineers? "Are they helping you?" we asked.

Staudt replied tersely that she had "no idea what the Corps was doing," but that the National Guard was out in force to assist her crews. What Staudt did not say spoke volumes.

But there is more. Lots more.

In Iowa City, waters topped the spillway at the Coralville Reservoir. Residents in the flooded center of town were told to evacuate and news footage last night showed volunteers hauling boxes of documents from a newly built government building.

Minnesota Governor Tim Pawlenty, on John McCain's short list for Vice-president, signed an executive order Tuesday declaring a state of emergency in two counties hit by flooding in Minnesota's southeast corner. Pawlenty is the same guy who vetoed infrastructure funding in the spring before the Interstate 35 bridge collapse last August. But no one talks about that anymore, either.

In Lawrenceville, Illinois a Corps of Engineers-built levee failed along the Wabash River on Tuesday.

Embarrassing Use of Words

The Embarras (one "s") River in east central Illinois embarrassed the Corps when one of their levees crumbled on Tuesday. The press said "broke," but that implies that it was an act of nature and nature alone that caused the failure. When something breaks, it is no one's fault. Use the word "failed," or crumbled," and you start looking around for who designed and managed the thing to begin with.

The language used in the local press is telling. After interviews with the Army Corps of Engineers in city after city along the broken embankments, dams, and levees, the language blamed "Mother Nature." People were told simply "to evacuate."

The Iowa City Press Citizen glossed it all over with the comment, "but as is usually the case, the river goes on its own schedule." The phrases "uncontrolled waters" and rivers that "threatened" to breach levees and rush over spillways are the journalistic voodoo of the flood of 2008.

Is this true? Does the water really have a will of its own? Sometimes writers (this one included) get so carried away with their passionate prose that they either intentionally or innocently send the wrong critical message to the readers who trust us to get it right. This is journalistic malfeasance. It is easy to blame mother nature, but what or who is behind a water management policy in the United States that allowed the city of New Orleans to be ruined, and an infrastructure up and down the Mississippi watershed to crumble?

No one is asking this question. Well there is one guy who is, and he runs a blog about New Orleans called the New Orleans News Ladder

Check him out for real time maps and analysis. His sometimes purple prose can be distracting, but he is telling the story. I understand he has been banned from commenting at the Huff Post. Maybe we should allow him back in. The Ladder should have been the highlight at the National Conference on Media Reform (NCMR) held in Minneapolis last week. But he wasn't. Neither was New Orleans.

Yep, folks -- right there on the banks of the Mississippi and a stone's throw from Governor Pawlenty's office -- 3500 of us sat, drinking java from the shiny aluminum mugs tattooed with conference logo of "Free Press." The best and brightest bloggers from across the United States -- everyone congratulating themselves about Iraq while the citizens at home in the heartland were about to be washed away.

This story should be as big as 9/11. The lights are on in the press rooms, but no one is home. Mainstream media has Iraq, American Idol record deals, and horseracing second guessing as the continuing focus and CNN says simply that the 2008 floods could be as bad as 1993. They went to the Governor of Indiana for one of the main quotes, which seemed designed to be reassuring.

"We have a very touch-and-go situation there, but everything that can be done has been done," Indiana Gov. Mitch Daniels said.

Is that true? Has everything been done that can be done? Are we all being lulled into a somnambulant apathy fed by the fodder of reassurance that it is just Mother Nature?

Senator Mary Landrieu (D-LA) called for an investigation of federal levee failures a year ago. Dubbed the "8/29" bill, this legislation would create an investigative panel on the scale of post 9/11 investigations. Top journalists ho were at the NCMR conference had never heard of it. They should have.

On August 9, 2007 the Senator released the following statement, urging the establishment of an 8/29 commission to investigate Hurricane Katrina levee failures:

"Since the early days following Hurricane Katrina, I have joined with Levees.org in calling for a comprehensive, independent 8/29 commission to take a targeted look at the collapse of the levee system and examine the steps we must to take to prevent another storm from drowning us. That is why I introduced an amendment to Water Resources Development Act to create the necessary congressionally sanctioned investigative commission.

There have been numerous studies about Katrina, without any clear direction of how to prevent a flood control system failure in the future. These studies have not adequately zeroed in on the crucial question of how our levees failed us, and the Interagency Performance Evaluation Task Force chaired by the Corps itself did not provide the completely independent examination that is required.

An analysis similar to that by the 9-11 Commission is the only route to uncovering how 1,071 lives were lost and 786,372 people were displaced when the federal government's levee system failed to protect us. While my WRDA amendment was met by partisan objection, I will continue to push for a thorough and independent analysis of the events leading up to August 29, 2005."

In a statement issued to the Huffington Post from her office this morning, Louisiana's Senator Landrieu said:

"Failures of infrastructure require understanding of the causes. This is no less true when bridges collapse in Minnesota, dams fail in the Midwest, or levees breech in South Louisiana. The flooding in the Midwest reminds us about the dangers presented by declining infrastructure. In fact, the United States spends today roughly two-thirds less on civil works investment than it spent in 1960, relative to the gross domestic product. The 8/29 Commission investigation team would give Congress and the American people the full, unvarnished story of the federal levee failures following Hurricane Katrina and would instruct us on how to avoid similar catastrophic infrastructure failures in the future."

Find the full bill at this link:

The National Weather Service on Tuesday predicted crests of 10 feet above flood stage and higher over the next two weeks at places including Hannibal, Mo., and Quincy and Grafton, Ill.

Read the national press anywhere, and the message is that towns are "protected" by levees. Are they?

A source with strong connections to the Army Corps of Engineers in the Upper Mississippi Watershed, who asked to remain anonymous, told us we are not asking the questions that need to be asked. "What is the real water policy of the United States Congress and why are they not taking this policy to the people?"

Each of the Army Corps districts has a flow rate plan, but they have different names in each district; i.e., St. Paul is Reservoir Operating Plan Evaluation (ROPE) Study, and in the Apalachicola-Chattahoochee-Flint River Basin, this set of rules is called the Interim Operation Plan (IOP). So it goes for each of the water districts.

"Real deal is the U.S. is running out of water," the source said. There is a need to get more water downstream for development in places like Atlanta which are running out of drinking water."

"The plan is to take water from the north and send it south in a controlled manner," the source said. "It is a reasonable idea to try to bring to bring flow rates to pre-settlement rates, but over-engineering in developments such as curb and gutter installations, cause fast run-off because of the impervious surface."

All Water Politics are Local

The source suggested that at local levels engineering firms rule city councils who grant permits for developments. Engineering firms over-engineer for the dollars. So, the developments have unnatural runoff and at the same time farms to the north don't want standing water in their fields

The issue is complicated and failing water containment infrastructure has been the focus instead of policy making. The biggest aquifers in the United States' heartland are drying up because of the reduction of porous and permeable surfaces which would ordinarily allow water to seep into the vast underground reservoirs which provide drinking water. The Colorado River is at a fraction of its historic flow rates, schemes abound to pipe drinking water from the Great Lakes, and the heartland's main aquifer is vanishing. Meanwhile, in a total intellectual and engineering disconnect, communities are drowning.

Is water policy being directed by hidden committees in Congress, as the source suggests? The Corps is culpable, but "they are the low guys on totem pole," the source explained.

The bottom line is that 100 year rain event plans are not being implemented. New Orleans has had billions pumped into levee repair and a "little wet spot" is still growing on the 17th Canal street levee there. 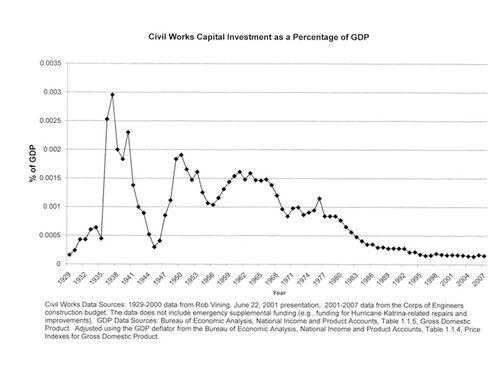 Senator Landrieu sent us a graphic, reproduced here, which shows the falling rates of investment in Army Corps infrastructure. Whether this gets anyone off the hook is anyone's guess. That is why an 8/29 commission seems to be the only way out of this mess. Bloggers can't do this alone, but we had better the heck wake up.