When buying kitchen staples like knives, pots, and pans, it's often worth investing some money for the best product. A Le Creuset French oven or All-Clad pan set will last a lifetime and increase the quality of your food, and is worth the approximately $300 - $600 you'll spend.

These appliances and implements tend to be low-tech, classic, and multi-use. While I'm hardly a Luddite, I agree that this is by and large where your money should go (besides the ingredients themselves). You can waste almost limitless amounts of money on kitchen gadgets with no real benefit to your culinary evolution. Worse, the gadgets most undeserving of exorbitant spending often carry the heftiest price tags; they also tend to be associated with food trends -- think breadmakers, home rotisseries, etc. I say this from experience, as someone whose apartment, due to a series of unfortunate events, currently houses a RonCo™ home rotisserie and a bread machine. 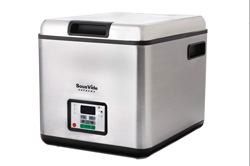 However, I certainly appreciate the thrill of the new. All home cooks long for the gadget that can transform their meals into something truly remarkable, a meal of restaurant quality. So when the Sous Vide Supreme first arrived at my office I was genuinely excited. Sous vide at home! The possibilities were endless!

Sous vide (French for under vacuum) is a cooking technique developed in the late '60s and early '70s, capitalizing on the growing popularity of plastics and an interest in a more scientific approach to food. Even a few years ago the process was referred to by the unappealing moniker "Cryovacking." It involves vacuum sealing food into a plastic bag before submerging it into a fixed-temperature water bath. In traditional cooking, be it roasting, boiling, searing, or what have you, food cooks from the outside in. However, in the tepid bath water of a sous vide, food cooks evenly, with the outside receiving no more of a heat assault than the center. Therefore, there is less loss of liquid due to overheating. That dry, sawdusty chicken breast and cardboard salmon you've had is the result of this over-reliance on fire and microwaves for your culinary needs. A sous vide allows food to retain its fluids, flavor, and tenderness, all the while killing problematic bacteria.

My first experiment with the Sous Vide Supreme was on a lazy Easter, when I decided to make lamb. I found lovely 1-inch thick, bone-in petite chops and decided to sous vide them with a simple rub of olive oil, salt, pepper and fresh rosemary.

The Sous Vide Supreme comes with a number of instructional guides that provide temperature and length of cooking guidelines. My lamb chops, for example, needed a relatively short bath, a mere hour at 134 degrees Fahrenheit. This was perfect for an impromptu meal that, when paired with a salad and new red potatoes crushed with fresh chives and sour cream made for a lovely Sunday dinner for two. Equally as delightful was that after seasoning and bagging the lamb, my dinner companion and I were free not only to prepare the other dishes but to clean up and watch a film rather than bustling in the kitchen. The results of our minimal labor were the fantastic: perfectly cooked lamb, rare and tender all the way through, with a sear around the edges from a quick pan fry in butter after the sous vide'ing was complete. I've devoted much more time and effort to lamb with disastrous results, as have many a home cook. (I've also had a great personal fear of cooking lamb since the Seder I left a very expensive -- and necessary -- lamb shank in a conventional oven for five hours, during which time it became a charred meat club.) This was a dream come true. And so effortless that said dining companion felt the need to remark, "This is delicious, but it's not as though you really cooked anything."

There lies Important Lesson Number One of the sous vide: do not let anyone see what you are doing. Bring out the finished results and let them wonder.

You may wish you also knew a little less about the sous vide. Having limited options, I had to settle the thing, which is a stainless steel box about the size of a microwave, on my kitchen floor. This meant that for about two weeks, I had a nearly constant lukewarm bath full of meat next to my recycling bin. That's gross, and it makes you wonder, every time you open one of your little vacuum-bagged masterpieces, if you're about to die of botulism. The New York Board of health has a thing or two to say about all this, and let's take a moment to put the caveat emptor out there: you can make yourself sick doing this, although you'd have to be somewhat of an idiot to do so. Let me say now, neither I, nor anyone I fed, to my knowledge, got sick from the sous vide. But it is a little weird, and I did have the unfortunate experience of more than once smelling meat cooking. While in general this is a beloved part of the cooking ritual, if the theory is that you have vacuum-sealed something, there should theoretically be minimal aromatics.

Which takes me to the vacuum sealer I was sent as part of my Sous Vide Supreme experience. It wasn't very good. It was easy enough to use, but the amount of pressure being exerted was lackluster and didn't properly insulate the food against leaking fluids. One of the gripes of sous vide home cooks is normally that they can't make sauces to accompany their meat dishes because there are no juices. I could have, and did, make gravy from the liquids filling up my little bags, which was delicious, but hardly the point of the exercise. There were no leaking tragedies, but if you're buying, skip the $129 for the vacuum sealer and look elsewhere.

I moved on to short ribs, which I rubbed with a mix of turmeric, garlic, salt, pepper, and MSG. (Say what you will about MSG. It is delicious, and it's not giving you headaches. Calm down. ) The results were truly lovely: a rich, fatty, tender meat, perfect for shredding. I mixed it with fried potatoes, new onions, paprika and a little cumin for a breakfast hash with a runny, fried rainbow egg on top. This was definitely one of my favorite dishes. I tried it on a number of different tasters who uniformly described it with superlatives. This is where the sous vide, in my mind, excels for home cooks. Think perfect hash, moist and tender carnitas, pulled pork, spare ribs: all the meats that fought to be tough when you wanted them to be tender. The sous vide is like the ultimate man eater, turning the Iggy Pops of raw meat into a gently cooked, crowd pleasing Jonas brothers.

I moved on to pork, buying a bone-in chop from my local farmer's market. This one I decided to do with sliced apples from the same market and more rosemary. The pork was described as the "tenderest and rarest pork I've ever had" by one taster. Personally, I've had rarer and tenderer pork that was braised for 12 hours, although this was very good.

Next we had a whole rainbow trout, which led to the fairly disgusting spectacle of a whole fish in a vacuum sealed bag (see photos below). Two different dining companions were mightily impressed with the butter and thyme stuffed fish, which came out moist and tender, but not firm enough for my taste. The herb flavor did permeate nicely, which is the saving grace of even slightly failed adventures with the sous vide.

Finally, we had a hanger steak. A friend donated leftover Thai soup with lemongrass, kaffir lime leaves, and galangal. We used the remnants as a marinade along with some crushed whole lemongrass stalks. The hanger steak was a bit of a lackluster venture on my part, which confirmed that it is virtually impossible to make a truly bad piece of meat in the sous vide. I threw it into a bag at 140 degrees because it overlapped with the pork, when really it needed to be at 134. I then turned the temp back down after about four hours, but also had invited some people over for the previous sous vide feast, had a bit of wine, forgot the steak, and let it cook for about 12 hours longer than I had intended. Whoops, and the stuff that culinary disasters (and burned down houses) are made of. The result was a steak not nearly as medium rare as it should have been and tender to the point of being somewhat unrecognizable, more like, as one taster described, a short rib texture than a proper steak. But it was still delicious, perfectly perfumed with the lemongrass.

That's the essential lesson of the sous vide: it's incredibly difficult to destroy a meal, and incredibly easy to come up with something pretty amazing with very little work. A perfectly cooked, relatively cheap piece of meat on a Friday night with basically no effort before hand, besides de-bagging some potatoes and steak and giving them a quick flash fry? Deeply appealing.

But the Sous Vide Supreme is a mostly self-selecting device. There are ways of getting around a costly appliance and still making slow cooked, flavorful food. If you're not a serious home cook, you may not want to spend the time and effort figuring out how to jerry rig an improvised sous vide. However, the demographic with the patience and inclination to do so would probably be the same group who would get the most out of the sous vide machine. For those in between, a subsection of the food population with a fair amount of disposable income but not a lot of time or interest in slaving over a perfectly braised this, that or the other, the sous vide is a godsend.

And if you are a very, very serious home cook, the sous vide will provide you with immense satisfaction on the level of a professional kitchen appliance. If, however, you fall somewhere in the middle range of food enthusiast/dedicated home cook/ normal person with interpersonal relationships outside of domestic pets who has one or two things they want/have to spend $600 dollars on rather than a water oven, no, the sous vide is not worthwhile.

1 / 8
Lamb Loin Chops
These petite bone in lamb loin chops were rubbed with fresh rosemary, olive oil, and salt. Rib chops would work as well, but loin chops are perfect for a quick pan sear.