South Africa's University of Cape Town removed a statue of British imperialist Cecil Rhodes on Thursday to cheers from students, a symbolic move that exposes persistent racial divides two decades after the end of apartheid.

The statue at the university, one of Africa's top academic institutions, has been covered up for the past few weeks as both white and black students regularly marched past with #Rhodesmustfall placards calling for its removal.

They believe it is a symbol of the racism against blacks that prevails in South Africa two decades after the end of oppressive white-minority rule.

Spattered with graffiti, it was hoisted by crane onto a truck from its tall granite plinth overlooking a rugby pitch as thousands of watching students cheered.

Some protesters climbed onto the truck to wrap tape around the face and place a bucket on the head.

"This represents a good step forward for transformation and it shows if something is wrong you really do have the power to change it," politics student Tinashe Sibeko, 18, told Reuters.

"For the black mentality in general it says that you don't just have to accept the status quo, you can transform and change things for the better," he added.

The demonstrations have triggered similar reactions elsewhere, with a statue outside parliament of Afrikaner Boer war hero and former prime minister of the Union of South Africa, Louis Botha, vandalized with paint.

They have prompted a backlash from white activists, who say they mask unreported racism towards a white minority they say takes the blame for the failures of the black-led African National Congress (ANC) party that has ruled since 1994.

"I am convinced the tears that have allegedly been shed as a result of the 'pain' this statue is causing are a disingenuous attempt to hide a racist agenda that results from the double standards in post-1994 South Africa."

The toppling of statues and national symbols of perceived oppression have marked seminal moments during revolutions, from the fall of the Berlin Wall, to the tearing down of busts of Vladimir Lenin in Ukraine and Saddam Hussein in Iraq.

In South Africa, however, the end of apartheid was intended to be a period of peaceful reconciliation and forgiveness encapsulated in the late Nelson Mandela's vision of a unified "Rainbow Nation".

South Africa has made significant progress in delivering broad access to housing and basic services since 1994 but millions of people from the black majority still live in shanty towns, often adjacent to white-dominated upmarket suburbs.

With a quarter of people unemployed and 60 percent of youths without jobs, many argue that the ANC has not delivered on its promises to alleviate poverty and redistribute wealth.

"We still operate in the unequal and bigoted socio-economic conditions generally talked about in the past tense," political analyst Greg Nicolson said in a column in the Daily Maverick, a leading political online newspaper.

"The specific legacies ... (of those whose statues have been targeted) are largely meaningless. The statues are a symbol of all that remains to be done, of real transformation."

The far-left Economic Freedom Fighters (EFF), led by firebrand leader Julius Malema, have joined the protests, seeking to draw President Jacob Zuma and the ANC into the debate.

The ANC has, so far, distanced itself from taking a strong stance on the protests, reiterating that everyone's culture should be respected in a unified South Africa.

Born in England in 1853, Rhodes made his fortune with his De Beers mining company and used his vast wealth to pursue his dream of expanding Britain's empire in Africa, annexing Mashonaland - present-day Zimbabwe - and naming it Rhodesia after himself.

Longtime Zimbabwean President Robert Mugabe made a series of jokes about the statue protests on Wednesday in his first state visit to neighboring South Africa in two decades, and mocked Rhodes, who is buried in Zimbabwe.

"We have the corpse, you have the statue," the 91-year-old Mugabe said during a lengthy speech, drawing raucous laughter from Zuma and ANC ministers. "Perhaps his spirit might rise again." 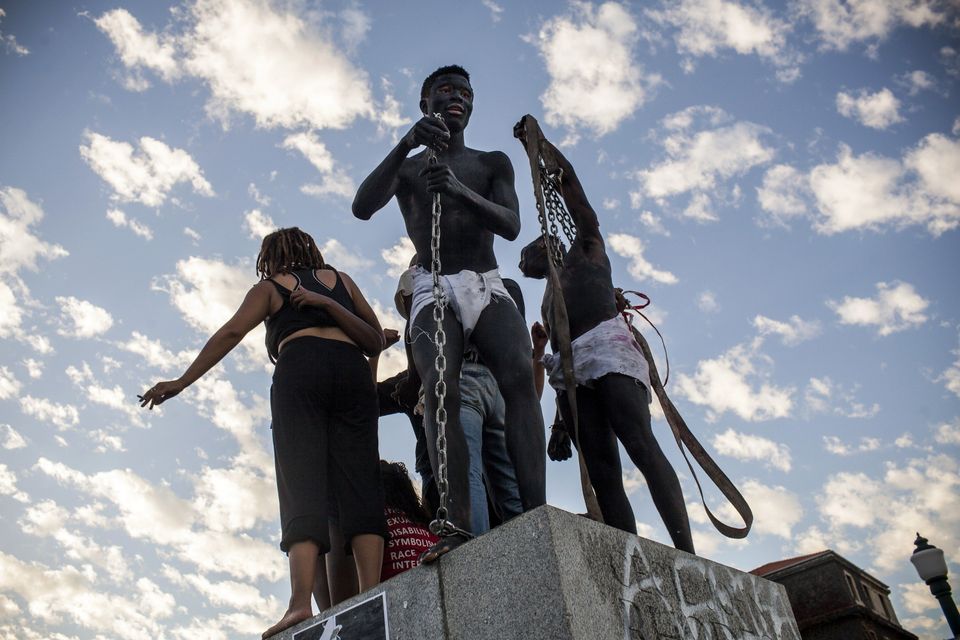