While journalists, pundits and wordsmiths compose an epic battle of words in the inferno that has become known as election year politics, the rest of the world has had its share of disasters that barely register on stateside media radar. Three million are displaced in India due to flooding. International news reports describe desperate families swimming for their lives. In South Africa, wildfires are once again racing over the Lowveld regions of South Africa, consuming people, homes, land, and animals.

An African journalist's first-person account of a near death experience when he became trapped in a raging wildfire last week offers a metaphor for the journalistic process. Perhaps it is time for all writers to revisit the tenets of the fourth estate. Journalists have an important moral responsibility to find the path of integrity through moral minefields and that have opened old political wounds and ignited a firestorm of misunderstanding about small town America. The focus on tabloid style reporting which has infected some portions of the media has the potential to burn the fabric of civilized American society in the process.

The journalist in the following true story found himself forced to make impossible decisions in a life and death struggle that can certainly be considered an allegory for a journalist's duty to find the path to truth while reporting during this election year. 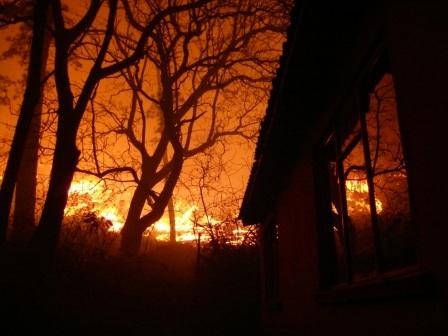 KAAPSEHOOP, SOUTH AFRICA (September 2, 2008)--Gale force winds blew over the parched landscape in Mpumalanga Province for two days, reducing the countryside of South Africa to a literal tinderbox. Lowvelder reporter Mark Stansfield was sent to cover the violent wildfires and unexpectedly found himself in a situation that required sound judgment in the midst of chaos, disorientation and fear.

This is a synopsis of his story, with Stansfield's words quoted verbatim, and reprinted with permission from the Nelspruit Lowvelder.

"Which way is up?" Stansfield wrote.

"Where's the sky. Why is it so dark? How do I get out of here? Please God don't let me die in this fire."

Stansfield was hit from behind with a wind gust of over 60 mph. It punched the last bit of air from his lungs and he described a "tsunami-size wall of flames," which leaped "like a living thing, through the branches of the forest," coming directly at him with less than ten meters to spare.

Stansfield was angry, frightened and disoriented; lost in a burning world, with no way to get his bearings, and no compass to direct his steps toward life--or death.

As the searing air threatened to suck the breath of life from him, the reporter saw "a wild horse, standing like a dream, surrounded by fire and swirling smoke." 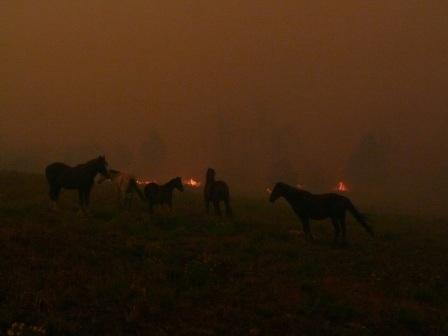 But this specter was no dream, the mare was very real and she was anxiously pawing at the ground. Stansfield also noticed something else.

"She whinnied and tossed her head, and I noticed the little bundle at her feet and realized her dilemma."

It was a frightened foal and the mare was trying to soothe it. In the animal world, instinct takes over in times of stress, and the mare was trying desperately to calm the frightened foal, lest it panic and run headlong into the flames that surrounded them. The mare's duty was to protect her foal in spite of the fact that, by doing so, she was putting her own life in grave danger.

Instinct also drove Stansfield. He walked up to the mare and "touched her forelock as she whinnied a little louder above the menacing crackle and pop of the blaze."

Then, as if in a dream straight out of Dante's Inferno, "six other wild ponies slowly emerged out of the swirling, choking smoke haze. I stared at them. And they stared back," Stansfield reported.

"I walked up to the horse and she did not run away."

"They nodded their heads and made soft sounds. The horses and I faced the same decision: which way would lead us to safety?"

There was no time to ponder the proper escape route, or if any was available.

In an unusual choice of words, Stansfield described his manner of flight as "trotting away." It was as if he had become one with the wild herd, but the significance of his movements and perceptions were yet to be revealed.

The flames and heat were getting closer and the fire was beginning to suck all of the oxygen from the air as it fed its own fury. The wild horses followed Stanfield--for a short while.

"I began trotting away while the flames and intense heat were getting ever closer, and the horses slowly followed me - for a while."

"Suddenly the mare and her foal began protesting loudly," Stansfield wrote, "and the other six stopped and seemed to be listening to her. Then they all did an about-turn and began racing along the edge of the flames - in the opposite direction!"

"I thought I was watching them running to their deaths."

But nature and animal instinct are powerful forces.

Stansfield described what came next.

"The mare and foal stopped and looked back. She began tossing her head furiously at me and her whinnying was louder. In an instant I understood: I was leading them in the wrong direction, and she was warning me of the danger!

"I turned and began running with the horses along the wall of flame and there was the sweetest, flame-free gap!"

"Seven horses and one tired man, breathing nothing but choking smoke, running for our lives, through a narrow gap in a wall of flame." 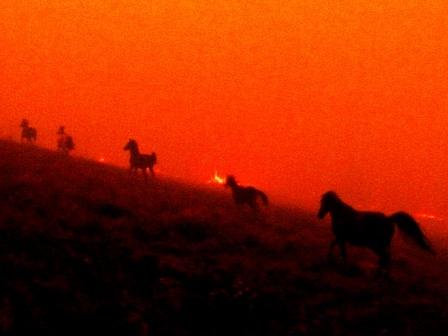 The journalist found himself laughing at the sheer joy of the experience, realizing that in an instant, he had "committed my safety - my very life- to the collective decision made by seven horses. And I had lived, as did they."

Stansfield found the owners of the Kaapsehoop Guest Farm gasping for air on the side of the main road.

They and their tenants had evacuated the farm earlier in the day, and had stood for hours watching helplessly as flames engulfed their property and the score of homes nestled among the greenery of the plantations.

The owner told Stansfield, "I don't really care about our homes. Where are the wild horses? Are they safe? Did you see them? Did you count them?"

The journalist was choked with emotion about his contact with the horses.

"I mumbled that they were okay," Stansfield said, and reported that he immediately drove home "with tears pricking my eyes. I had encountered nature, and I had been one with it--even while our very world burned around us."

As writers who are trying to inform the public, we are not entirely without direction and guidance. A Stansfield relied upon the instinct of the wild horses to guide him to safety, we writers have models of professional standards and behavior which offer a moral compass as we try to negotiate the political landscape and explain what is happening in all parts of America. This includes the large cities on our coasts, towns both large and small, and the farms of the heartland.

Sometimes we may feel that our very world is burning around us, but there is a way out.

Pulitzer Prize winner and Oregonian writer Tom Hallman was quoted in a story from the Society of Professional Journalist's meeting in Atlanta this week. Journalist Tracy Chan described Hallman as he spoke at a workshop and encouraged journalists to "always try to relate to people."

"You take your own heart into these various worlds. ... And then you ask your subject questions that reveal the universal truth that binds all of us, and then you put it in a way that makes someone else remember and feel," Hallman said.

And we must also remember that our subjects also remember, feel, and have unique lives as human beings in their own families, towns, cities and communities. They all have something to say--something worth listening to.

All photos by South African Lowvelder reporter, Mark Stanfield. Reprinted with permission from the Lowvelder.

Armed With A Photograph, Activists Made The Country Face What Happened To Tyre Nichols