To many outsiders, the South African art world may seem to have produced no more than a few major talents -- most notably William Kentridge. Their work further suffers by being narrowly perceived as inextricably associated with apartheid, still the lodestone of South African identity. This oversimplification persists largely because even decades after the global boycott of South Africa's economy and culture came to an end, the country's art scene remains small. And while a few galleries are starting to reach out internationally, the arts still lack the broad popular audience at home that they enjoy in the Americas, Europe, and, increasingly, Asia. 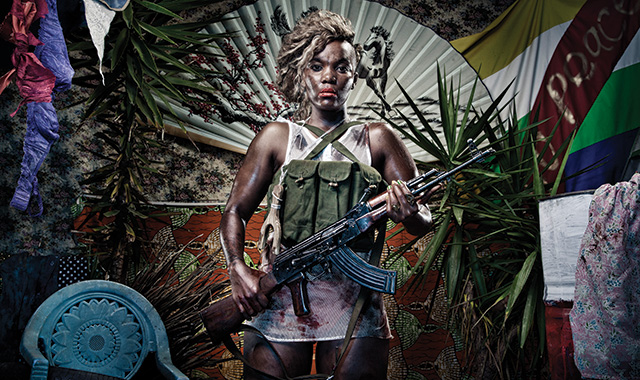 Exacerbating the problem, the ruling African National Congress seems more interested in exploiting the divide than in broadening support for the arts, as evidenced by the party's attempt last year to censor a painting of polygamist president Jacob Zuma as Lenin with his penis exposed. Intended by artist Brett Murray as a denunciation of corruption among ANC leadership, the government moved to suppress the work, launching a lawsuit against Johannesburg's Goodman Gallery and calling on party members to boycott a newspaper that published the image. A tribunal ruled that no action be taken, but the firestorm left the impression that South Africa's government was more interested in culture wars than cultural development.

Yet a closer look reveals an art economy beginning to emerge from colonial provincialism. Only a small number of galleries and auction houses thrive in Africa's largest economy, but top commercial galleries increasingly take part in major art fairs and place work in foreign museum shows, and Goodman, Stevenson, and Everard Read galleries have all recently expanded. Established and newer galleries are supporting a younger generation of contemporary artists, and many nonwhites are gaining the attention of collectors who, until recently, seldom crossed the color barrier. The appreciation and collecting of fine art remain pursuits of the white minority, but a black middle class is beginning to rise. Still, black-owned art businesses and collections can be counted on the fingers of one hand, an unfortunate deficiency in a nation of 52 million inhabitants, 80 percent of whom are black.

Museums, including the major municipal galleries in Johannesburg, Cape Town, Pretoria, and Durban, remain woefully underfunded. Few receive major loans of works from abroad because of financial constraints, substandard facilities, and security issues, and they tend to present mainly regional art and traditional crafts. Private support is negligible owing to unfavorable tax laws that have not fostered a culture of philanthropy. Even the South African National Gallery in Cape Town cannot afford to buy historical or contemporary foreign works, and Riason Naidoo, the institution's first black director, admits, "We cannot compete with the acquisitions budgets of international museums that are also vying for South African art." But he notes in what may be a hopeful sign for the emerging scene, "We have been more proactive in identifying talented young artists for our collections who previously would not have been considered."

For a brief period in the 1990s South Africa seemed to have become a full-fledged member of the international art circuit. After decades of exclusion during the international economic and cultural boycott that had isolated the country, in 1993 more than 20 South African artists were shown in the Venice Biennale. In 1995 the Ministry of Culture founded the Johannesburg Biennale, which for the first time brought international art to the stigmatized country. The second edition, in 1997, branched out to venues in Cape Town, with shows organized by international curators under the direction of Okwui Enwezor, then a rising curatorial talent. But the event's major funder, the city of Johannesburg, closed the exhibition early to save money, and the biennial has not been revived since.

Despite rapid social transformation since the fall of apartheid, arts and culture have seldom found a place among government initiatives combating grave socio economic challenges, including rampant poverty and an inadequate education infrastructure. Last fall the national Department of Arts and Culture announced a Visual Arts Task Team to strengthen the arts. Clearly, however, the transformation of South Africa's art scene will continue to be driven by the private sector. There, growth is the order of the day.

"Government support is low, as is understandable," says collector Paul Harris, "so in the private sector we try and do as much as we can. Not as in other countries, but you start somewhere." The former banker was speaking on the terrace of Ellerman House, his cliffside hotel above Cape Town that serves as a showcase for his extensive collection of South African art. On display are classic modernist paintings by Irma Stern and Jacob Hendrik Pierneef, as well as such contemporary works as a slab of polished granite into which conceptualist Willem Boshoff scratched a line for every day Nelson Mandela spent in prison, raunchy political satires by Anton Kannemeyer, a monumental stacked-stone bust by Angus Taylor, and moody figurative paintings by John Meyer.

"There's a breadth of talent exploring contemporary media across the racial spectrum, and it's on a par with the rest of the world," says Fraser Conlon, co-owner of New York's Amaridian Gallery, which sold sub-Saharan art and design until its recent closure. "The biggest challenge for Africa is access to the global markets. West African artists have a far greater presence because of proximity to Europe, and the colonial background is far more favorable. But southern Africa is more isolated. Only since the dismantling of apartheid have people been willing to consider the country."

Reconsideration of the South African market has been fueled largely by a handful of wealthy collectors within the country and expatriates in England who compete for trophies by such modernists as Maggie Laubser, Pierneef, Alexis Preller, Stern, and Jean Welz. According to the art historian Esmé Berman, in 1993 a post-Impressionist still life by Stern topped R200,000 ($65,000).When it returned to market in 2011, the piece brought more than R10 million ($5 million) at auctioneer Strauss & Co.

Berman says the exponential rise in the early-modern market was catalyzed by Bonhams' 2007 launch of South African sales in London. The first included 13 Sterns with estimates above £70,000 ($140,000) and one at £550,000 ($1.1 million). Strauss & Co. was founded in 2009 in Johannesburg, and a marketing battle resulted in a string of record prices that culminated in 2011 with the sale of Stern's Arab Priest, 1945, at Bonhams for £3 million ($5 million) to the Qatar Museums Authority. But by 2012 the auction houses had flooded the market, and the supply of top works had diminished. The annual Bonhams sale last October flopped. The following month, however, in a perverse confirmation of the rising value of works by South African modern masters, paintings by Pierneef, Laubser, Hugo Naudé, and Gerard Sekoto were stolen from the Pretoria Art Museum.

Few contemporary artists achieve such prices, however, without emigrating, as Marlene Dumas and Robin Rhode have done. The South African record for Kentridge, whose 2010 retrospective at the Museum of Modern Art in New York was universally acclaimed, is just R2.2 million ($250,000), set at Stephan Welz in Cape Town in 2010, though one of his works reached $600,000 at Sotheby's New York in 2011. One of the few other artists of international reputation to make a home in South Africa is photographer Roger Ballen, an American who moved to Johannesburg in 1980. He has documented white poverty in images that mix grim intimacy with touches of Surrealism. He has shown with Gagosian and at major museums, with a 2013 retrospective slated for the Smithsonian's Museum of African Art in Washington, D.C.

"The scene is changing rapidly," says Ross Douglas, founding director of the annual Joburg Art Fair, which was launched in March 2008. By the time of the fair's fifth edition last September, several satellite events and fringe shows had sprung up around town. At the main event, 29 South African, French, German, and British gallery booths were augmented by more than a dozen special projects. But despite high-quality offerings for modest prices, the fair attracted few foreign collectors and curators.

But according to many arts leaders here, there has been improvement. "The market today is unrecognizable from what it was 10 years ago," says National Gallery director Naidoo. "It has become more professional; there is more competition with many more commercial galleries, and there are many international museums and collectors acquiring South African modern and contemporary art, which can only be good for the artists. South African commercial galleries are now more visible at international art fairs from Miami to Berlin, and Stevenson for the first time will be participating at Frieze, which is a significant breakthrough."

Another goal of the Joburg fair is to diversify the audience for contemporary art. "Galleries were perceived to be white, elitist, alienating spaces. We want to change that," says Douglas, noting that opening night five years ago was an all-white affair. Now affluent blacks number among the patron class, made up largely of bankers, mining barons, winery owners, and corporate executives.

Among the largest collections of modern and contemporary South African art are those of financial institutions and mining companies like absa, BHP Billiton, and Standard Bank. Noted private collectors include the Rupert family in Stellenbosch and Graaff-Reinet; entrepreneur Bruce Campbell-Smith of Cape Town, whose late 19th- and 20thcentury black South African art was shown at the National Gallery in 2005; and investment banker Gordon Schachat, who exhibited parts of his modern and contemporary collection at the Joburg Art Fair in 2009.

Among those in attendance last fall was Kentridge, who feels the fair is a poor substitute for the intellectual heft of a biennial. "I'm very pleased that we have the fair," he says, "but it's a shame the biennial no longer exists. That was a curated essay about what's happening in the art world. The fair, like all fairs, is a trade show." Nonetheless, the fair provided a snapshot of the variety of young artists from South Africa.

Among the most welcome recent developments in the South African art world was the opening last year of the Wits Art Museum, a modern showcase for tribal and contemporary art in downtown Johannesburg. Then, in December, the country's first private museum of contemporary art was christened by financier Piet Viljoen in a converted Victorian house in Cape Town. The New Church -- named after the street it is on -- opened with a show drawn from Viljoen's 480-piece collection and curated by Stevenson Gallery film artist Penny Siopis, who selected works by Nicholas Hlobo, abstract painter Zander Blom, and installation artists Dineo Seshee Bopape and Wim Botha.

On the international front, South Africa will not only return to Venice in 2013 -- the South African Consul General in Milan will serve as Commissioner -- but the Department of Arts and Culture has been in discussions to establish a permanent pavilion at the Biennale. As the country's leadership seeks to transition from revolution to fully functioning democracy, some hope that the character of the art, too, will change. "Art thrives where there's a lot of turmoil and emotions," collector Paul Harris observes. "And so for a long time the so-called 'struggle art' was the main thing. But my personal view is we've got so many more positive things, in terms of building government and reconciliation between people. That will be the future: celebrating what has been achieved in terms of reconciliation, and what still can be."

This article appears in the February issue of Art+Auction.

Innovators, Part 3: 5 Figures Who Are Redesigning the Way We Experience Art

VIDEO: Painter and Digital Artist Feng Mengbo's "Not Too Late" in NYC

Tribe of Joe: Saxophonist Joe Lovano and His Us Five Band