Perhaps one of the strongest arguments for why Hinduism needs to be understood as a truly global religion is its nearly 200-year presence in South Africa, and its survival in the country despite systemic discrimination against Hindus prior to the end of Apartheid.

To be sure, the only mention Hinduism in South Africa usually gets in textbooks is during the period when Mahatma Gandhi lived there as a lawyer and social agitator prior to his return to India in 1914. But Gandhi's time in South Africa only tells a portion of the story of Hinduism's arrival, endurance, and rejuvenation in the country.

There are some archaeologists who contend that Hindus arrived in South Africa as early as the 6th century CE, but most historians agree that Hindus came as laborers from pre-partition India in the middle of the 19th century. Unlike other Hindu expatriate populations that were largely from northern parts of India, a significant number of those who came to South Africa as laborers for the British were Tamil. As in the case of the West Indies, the majority worked in sugarcane plantations under severely restrictive terms of indenture.

Early Hindu populations established houses of worship, and one of the most common traditions that came with the new arrivals was the practice of planting a Hanuman flag - a symbol of devotion to the deity who inspires courage. However, by the late 1870s, the colonial authorities in South Africa began to place more restrictions on Hindu practice, and by the end of the century, there were only a handful of Hindu temples in operation. The Umbilo Shri Ambalavanaar was built in 1875 by Tamil Hindus, and later reconstructed after the floods of 1905.

In many ways, Hinduism became an increasingly underground religion in South Africa. After Gandhi took his satyagraha movement to India, conditions for Hindus worsened. Hindus were prohibited from owning property and Hindu marriages were not recognized. The social restrictions placed on Hindus during this time caused many to join in anti-colonial - and later, anti-apartheid - resistance movements. In fact, as Nelson Mandela would later recall, some of his closest allies (and fellow inmates) were Hindus, and he was greatly influenced by Hindu philosophy.

Despite the injustice of apartheid and the political turmoil that engulfed the country in the 1990s as it transitioned to a multiracial democracy, Hinduism remained a vital part of the social fabric. Today, between 550,000-800,000 South Africans identify as Hindu, including a growing number of black South Africans who have joined sects such as ISKCON. Indian immigration to South Africa has also rejuvenated the population, though older population is markedly different in cultural and religious practice than the newer groups of Indians. 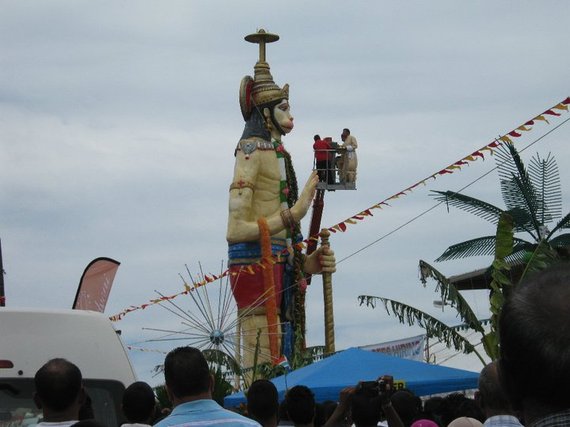 With the colonial and apartheid era restrictions on Hindu temple building long gone, the community has once again become more visible. They're not only planting Hanuman flags, they've built Hanuman statues, including a 40-foot tall monument in a suburb of Durban. It's a testament to a community whose survival and resilience amidst systemic oppression that can inspire the global Hindu diaspora.