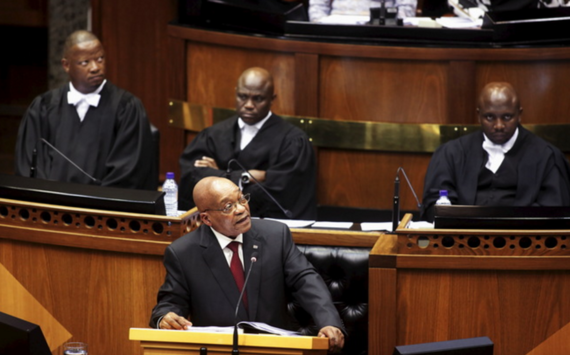 South African President Jacob Zuma delivered his 2016 State of the Nation Address yesterday. Here is a summary of comments made by Professor Mzukisi Qobo in a radio interview with The Conversation Africa Politics + Society editor Thabo Leshilo and Voice of Wits presenter Tsholo Semenya. You can also listen to the audio below.

Speech did not hang together

Zuma's speech was unwieldly. He did not touch the nerve of the nation. He tried to cover everything under the sun. If you are trying to put out a wildfire, you have to pour on gallons of water.

Zuma didn't give you a sense that the country is in a crisis. Mining, for example, has been in decline and 47,000 jobs have been lost in the past three years.

The problem is that the speech did not hang together. It was not pivoted on an anchor. It was a collection of inputs from various government departments. The plans he mentioned in response to a possible downgrade by international rating agencies were piecemeal. The rhetoric that business and government must work together has always been there. We are not going to see much action in terms of implementation.

His comments on the current drought were very commendable. He spoke in vernacular and gave the impression the he grasped the nettle. The government has been criticised for its handling of the drought, but the fact that he touched on this issue with passion was commendable.

A lack of leadership

I was surprised by Zuma's comments about #feesmustfall and education in general. All he mentioned was that a commission of inquiry had been set up (to investigate the provision of free higher education).

It has been four years since Presidential Review Committee on State-owned Enterprises reported. But only in this State of the Nation address did Zuma announce that its recommendations will now be implemented. The appointment of commissions of inquiry signals timidity, a lack of leadership and sound judgement in government.

Zuma said many state-owned enterprises are doing very well. But the key enterprises that play a major role in the economy have been riven by corporate governance issues. There are also huge contingency liabilities, and high turnover rates on board members and chief executives.

There was no strategic thinking that underpinned the decision to move the airline from public enterprises to national treasury. You get a sense that there is an ad-hoc approach to the running of state-owned companies.

Cutting the cost of running government

In 2013, Finance Minister Pravin Gordhan announced similar cost-cutting measures. There was nothing substantive (that Zuma announced).

It was small-minded of Zuma to announce the potential move of parliament from Cape Town to Pretoria and say it was urgent (as a potential cost cutting measure). I don't think this is a decision that can be made in two to three years' time. It requires a lot of planning.

Disruptions by the EFF

In an ideal society what the Economic Freedom Fighters (EFF) did would be (regarded as) very disruptive, perhaps inappropriate. But we are living in abnormal times.

Zuma came across as worse than the EFF. The EFF raised important issues, like the role of the Gupta family - with whom Zuma is associated.