Apartheid, the racial segregation system in South Africa, lasted from 1948 to 1994. During this time, black individuals in South Africa were deprived of citizenship and virtually every aspect of life in South Africa was segregated by race including education, neighborhoods, medical care, and public spaces.

After nearly 50 years of brutal apartheid in South Africa, it is almost impossible to imagine how people could coexist peacefully. As a way to heal the deep wounds among people, the new Government of National Unity in 1995 established the Truth and Reconciliation Commission (TRC), which invited perpetrators of violence to speak about their past transgressions. 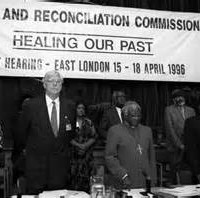 The idea was that if people spoke to one another as fellow human beings, it would provide an opportunity to heal and forgive and thereby allow reconciliation to occur. The TRC lasted until 2002 and, despite some flaws, was widely viewed as a success and served as a model for similar systems around the world in post-conflict communities.

This account was compiled from an interview by ADST in 2009 with Monica Joyi, who worked for the TRC Media Office from 1996-1997. You can read the entire account on ADST.org

JOYI: I started [at the TRC] in February 1996 and because of my media experience here in Washington I got assigned to the media office to be the administrator of the Media Office.

I think [the establishment of TRC] was to appease the fears of white South Africans; but at the same time, to give answers to those many mothers who had lost their children and their loved ones through the atrocities of apartheid. If you look at the whole notion of amnesty, and how the perpetrators (some of them) were granted amnesty, you begin to wonder what a forgiving nation and black South Africans are specifically.

The Archbishop Desmond Tutu was also the Chairperson, he saw it more as a catharsis for the nation so that post-1994, you have this cleansing process for the nation. But the whole process of the Truth Commission was developed as part of the Reconciliation and National Unity Act to redress the atrocities of the past, including violations of human rights, and more importantly, to restore a level of dignity to the majority of South Africans who lived under the draconian laws of apartheid. I believe it was the first of its kind in the world.

Q: What was it that convinced the perpetrators to be present in a process that could likely turn against them?JOYI: I think there is something about one's conscience, which eats at you and they want to come clean and "give themselves up" as the expression goes.

They were tired, as the late [African National Congress] ANC President Oliver Tambo once said, "We have no more cheeks to turn." It is almost that the TRC had to happen and I think that period must have given those individuals a way to come clean, regardless what would happen at the end.

If you look at the incident with Amy Biehl, the Fulbright student who was murdered in one of our townships in Cape Town, that [reconciliation] process is how her parents embraced these men, these perpetrators, responsible for the death of their daughter. You begin to see how cathartic that process was, listening to the parents, and how these young men went to meet with Amy's parents asking forgiveness. Instead of her parents turning their backs on these young men, they embraced them.

[The parents created the Amy Biehl Foundation Trust] but, again you see, for me that epitomizes what the TRC process was all about. To me, the purpose of the TRC started as a path leading to forgiveness.

I never went to any of the hearings. I did not go for personal reasons, and I guess on principle -- I saw it as wounds, which had partly healed, were reopened. I did not understand; I thought of the parents, especially the mothers, how their wounds would be reopened and I was always concerned about the aftermath. 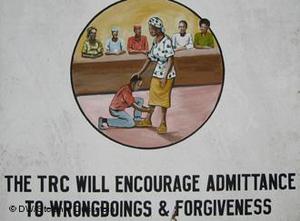 Who goes home with these mothers? Who goes homes with these parents? Was there a support system in place once these families returned to their communities? If there was, I was not aware of it. But personally, I was just critical about that particular aspect of the process.

I would receive local and foreign journalists, and if they wanted to meet and interview the Archbishop, I would arrange the meetings. On occasion, I would also sit in.

Everybody knows [Archbishop Tutu] is a charismatic leader, very affable and I thought, at the time, easily accessible... I also recall an interview in one of our local newspapers, where the Archbishop said that he loves the rum and raisin ice cream and the very next day, a large box of ice cream was delivered to the TRC. On another occasion, he shared with a reporter that he likes rum and Coke, and again, he received a delivery of rum and Coke.

And what is further interesting is that I left the TRC in mid-1997, and relocated to another city. In 2005, almost 10 years later, I was invited to a breakfast by one of the representatives of the Desmond Tutu Trust, and there was the Arch (as he is affectionately known)....

As I was standing, the Arch walks towards me, pointing a finger and said, "'Where have you been? I haven't seen you in ages.'"

I do know that Desmond Tutu was involved in all of the Truth and Reconciliation Commissions (TRCs) outside of South Africa including the ones for the Solomon Islands so I think his expertise in the aspects of forming the TRCs were put to good use....

Q: Do you feel that the model can work in almost any country?JOYI: I think so. And also, to me, human beings are not different from each other. We all breathe, we all smile, we all hurt, so that level of hurt may be intensified in some cases, but the basic traits of human beings exist.... 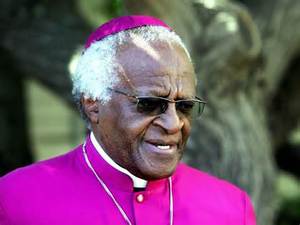 But allow me to add, this reminds me of [my] dear friend, Yaliwe Jiya, who taught at the University of Fort Hare; her husband, Zin, was in the United Kingdom and a white colleague of his died. Yaliwe went to represent her husband at the funeral.

She told me that she saw the widow and her two children standing there in sorrow at the funeral, all alone, and all she did was to walk over and hug her and that is all this woman needed.

And so that picture is always in my mind; reaching out to someone can sometimes be very clinical but it can also be very emotional. All she did was touch this person and nobody around her, not even her close family or other family and friends -- no one thought of that and Yaliwe added, "You know, in our tradition, we reach out."....

Desmond Tutu was forever hugging everybody. I think at several of the hearings, he would break down and cry. I thought, "If the Chairperson can break down and he is right there, and he has to listen to this, that says a lot."

There are many critics, South African critics of the process, but I would say even though I have my own criticisms, I would say at least something was done. And I think South Africa needs to be recognized for taking that step....

Q: In order to be granted amnesty you had to fully disclose the truth. So how is fully disclosing the truth measured?JOYI: If you look at the Biehl family, to me they epitomize what truth is all about. Because they opened themselves up to having these perpetrators disclose the truth, and in my view, this happened because the Biehl family was open and accessible. It gives the perpetrators the opportunity to "come clean." That to me is a human reaction....

Because my belief is always that you respond to somebody as that person responds to you. If you open yourself up, you are allowing me to open myself up as well, so there is almost like a meeting of minds.

Q: Do you have any experience with the parents of the victims, or the relatives of the victims unable to open themselves? Did they accept amnesty?JOYI: I do not have direct experience but I do know there were some perpetrators granted amnesty even although some members of the family did not think they warranted it because they did not disclose the truth. 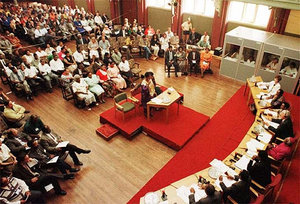 And of course there are also perpetrators, who were denied amnesty and so it goes back to what I said earlier about one's conscience, so they would forever carry that burden in their hearts or in their minds.

I think anybody, who... was prepared to appear before the Commission and to speak, it is with the idea of closure.... But again, I still maintain that aftermath has been my concern.

So I think if you are prepared to confront an issue, it is to start a clean slate. But human beings are fallible individuals so there might have been many who went [to the TRC] with anger and left with anger. I was more concerned with the majority, who broke down and did not leave with anger but left with a wound wide open.

It is difficult to gauge an individual's psyche, but you want to believe as a human being there are traits we all have in common.... and again I think of the Biehls, and how that helped them deal with their daughter's death. If you look at those young men, how they could go deep into themselves to say as an individual, who has been anti-white... to embrace this white family or the parents of this white girl who they murdered.

That is huge. I never thought about it for the longest time but the more I am speaking, the more I think of the numerous possibilities of studying the Amy Biehl case itself, and how it could lead to so many ways of looking at this notion of reconciliation