Released Friday, the live-interview phone surveys by CNN/Time and the American Research Group (ARG) and the automated poll from Rasmussen Reports all show Romney increasing his support and moving into wide leads over both former Pennsylvania Sen. Santorum and former House Speaker Newt Gingrich. Two of the surveys also show that Romney's support in South Carolina has risen to more than 30 percent for the first time. 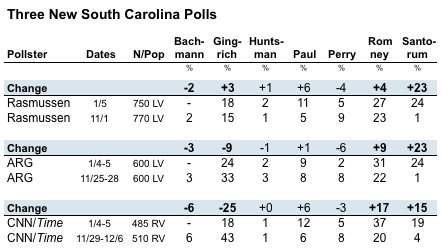 The three polls also reveal huge increases in South Carolinians' support for Santorum following his surprising surge to the top two in Iowa. Santorum's support rose from low single digits in November to 19 percent in the latest CNN/Timepoll and 24 percent in the ARG and Rasmussen surveys.

While the polls are consistent in finding gains for both Romney and Santorum, the timing of the firms' prior surveys produced very different readings on the size of Romney's gains. The previous CNN/Time and ARG surveys coincided with the surge of support for Gingrich. As shown in the chart below, featuring the HuffPost Pollster trend lines based on all public polls in South Carolina, Romney's support declined when support grew for Gingrich in December and for former candidate Herman Cain (not illustrated in the chart) in November. 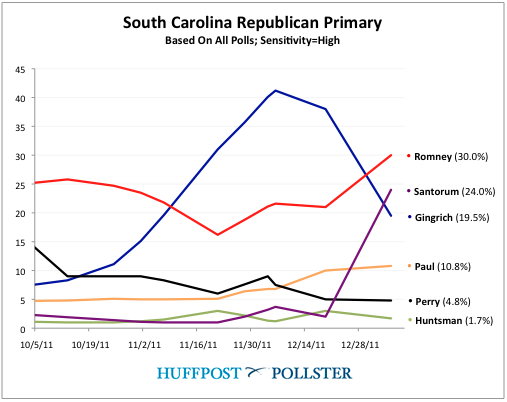 The current polling snapshot comes at a moment of enormous potential volatility. Santorum's support is clearly rising while Gingrich's still-considerable support is in apparent free fall with two weeks remaining before the South Carolina primary on Jan. 21.

History also demonstrates that preferences in South Carolina can shift dramatically following the New Hampshire primary. Four years ago, for example, support for John McCain hovered in the mid teens until after New Hampshire, when it surged to 28 percent in the Pollster.com chart (below). McCain defeated Mike Huckabee in the South Carolina primary by a 33-to-27 percent margin. 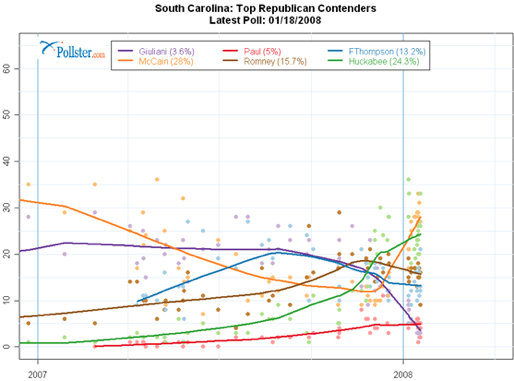 Finally, the three polls are less consistent in their estimates of current support for the candidates, particularly for Romney. The CNN/Time poll puts Romney at 37 percent, which is 10 percentage points higher than the Rasmussen poll (27 percent) with the ARG survey falling in between (31 percent). This gap suggests that differences in polling methodology are at work, especially the way the surveys define the likely electorate. Such differences hint at a greater potential for volatility in polls in the coming weeks.

But for all the caution about the latest results, the fact remains that having essentially tied with Santorum in Iowa, Romney now leads by wide margins in both New Hampshire and South Carolina. Two weeks is a very long time at this stage in the presidential nomination race, but if Romney sweeps both upcoming primaries, he faces a very easy path to the Republican nomination.