WASHINGTON -- Two new telephone polls concluded on the eve of the South Carolina primary not only confirm continuing momentum toward Newt Gingrich; they suggest that the former House speaker may be headed for a surprisingly comfortable, double-digit win.

A live-interviewer survey conducted by the American Research Group on Thursday and Friday nights finds Gingrich now leading Mitt Romney 40 to 26 percent, followed by Ron Paul (18 percent) and Rick Santorum (13 percent). An ARG poll fielded earlier in the week had Gingrich and Romney in a virtual tie (with 32 and 31 percent, respectively).

That finding complements final results from the automated survey conducted over three nights by the Democratic Party firm Public Policy Polling, which shows Gingrich leading Romney 37 to 28 percent, followed by Santorum (16 percent) and Paul (14 percent). PPP noted that in the interviews it conducted on Friday evening, Gingrich led by a 40 to 26 percent margin -- exactly the same margin found by the ARG poll.

The HuffPost Pollster chart -- based on all available public polls of South Carolina voters, including the latest from ARG and PPP -- now shows Gingrich leading Romney by a 10-point margin (36.8 to 27.0 percent), followed by Paul and Santorum running far back in third and fourth place (with 15.6 and 13.1 percent, respectively). Support for Gingrich now stands at roughly the same level that polls found when his numbers first surged in late November 2011. 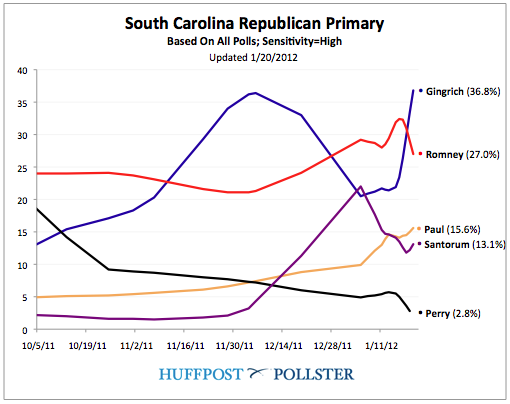 Friday night is a tough time to find some voters at home and, as such, is a far-from-ideal time to conduct a telephone survey. Caution about primary polling is always in order. However, the results from PPP and ARG suggest that if the unexpected occurs in South Carolina, the surprise may be less about the identity of the winner than the size of Newt Gingrich's margin of victory.