If you thought "Just Dance" wasn't that great, you're not alone. The Associated Press has released photos it says depict a South Korean Christian group praying that Lady Gaga's April 27th concert in Seoul be canceled, on the grounds that "Just Dance" is not appropriate for public consumption.

South Koreans under the age of 18 have already banned from attending the concert, the AFP reports. Initially, the show was deemed suitable for anyone over the age of 12, but the Korean Media Rating Board upped the age of entry.

The photos, which are available for viewing in the gallery below, show members of a church group holding defaced signs of the pop singer and passionately praying.

Earlier in April, Lady Gaga tweeted hopes that the government would change its mind about the 18+ age restriction on her show. The New York Times reported that Marilyn Manson, Jay-Z and 50 Cent have had similar restrictions put on their concerts. None of the popstar's other Asian dates have an age restriction on them.

Of course, concerts in the United States are frequently restricted to those over the ages of 18 or 21, though the availability of alcohol -- not the spectre of teens becoming "infected" with homosexuality -- is usually the given reason.

Gaga is launching her Born This Way Global Tour in Seoul and will then go on to perform in select other Asian cities before commencing 21-show European run. The singer arrived in the country on Friday and was spotted in a surprisingly glamorous dress with a seriously plunging neckline. 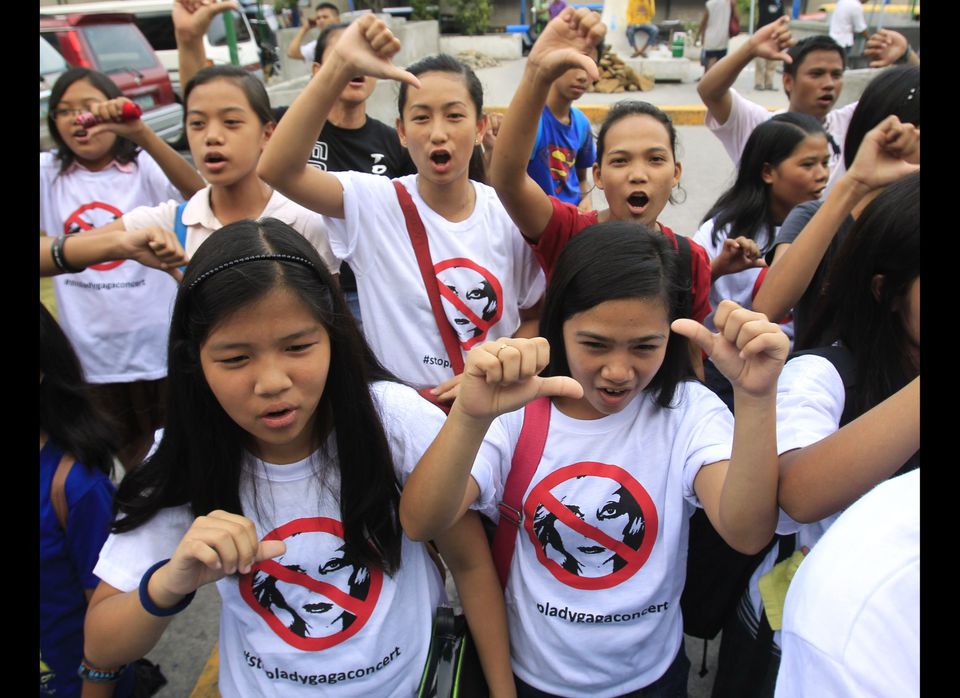 1 / 18
Filipino Christian youths flash the thumbs-down signs as they chant "Stop the Lady Gaga concerts" during a rally, calling for the cancellation of the singer's May 21-22 concerts, outside the Pasay City Hall in Pasay, south of Manila, Philippines, Friday, May 18, 2012. The youths said they are offended by Lady Gaga's music and videos, in particular her song "Judas" which they say mocks Jesus Christ. Lady Gaga's concert was marked also by protest from evangelical groups in South Korea and the singer scrapped an Indonesia concert following protests from conservative Muslims. (AP Photo/Bullit Marquez)
AP