Fears of war on the divided Korean peninsula have intensified since the rivals fired artillery shells at each other last month across their tense western sea border. Four South Koreans on a front-line island were killed; the North's casualties are unknown.

Many South Koreans have become used to regular North Korean threats to turn the South into a "sea of fire" and have reacted coolly to civil drills in the past. There has been widespread anger and shock, however, over the North's Nov. 23 artillery bombardment of South Korea's Yeonpyeong Island.

It was North Korea's first assault targeting a civilian area since the end of the 1950-53 Korean War. Both Koreas accuse each other of staging the first provocation. The North claims that South Korea fired artillery toward its territorial waters, while South Korea says it launched shells southward, not toward North Korea, as part of routine exercises.

The nationwide 20-minute evacuation drills Wednesday were the largest since the country began the training in 1975.

In frigid temperatures, air raid sirens blared. Government officials and company employees stopped work and evacuated to underground shelters in basements, subway stations and parking lots. Housewives were asked to turn off the gas in their kitchens.

A dozen South Korean fighter jets flew over major cities to simulate North Korean airstrikes. Trains ran at low speeds in a symbolic move to join with other stopped vehicles. In downtown Seoul, about 30 miles (50 kilometers) from the heavily militarized border and within easy range of North Korean artillery, the city's congested streets momentarily cleared as traffic halted.

There was no penalty for not going to shelters, but authorities encouraged participation, sending out word through the media and posting notices in residential areas. Officials said about 11 million of South Korea's 49 million people took part in the drill.

Lim Soo-ja, 68, was one of those who didn't go to underground shelters, standing instead near Namdaemun market in central Seoul.

"I am too tired to move around, and I did not know where I should go," she said.

At Seoul's Ahyeon Middle School, 27 students sat in their classroom, dressed in winter coats and wearing white cotton masks. When the sirens rang, the students lined up in front of the classroom door before marching out to a subway station. Teachers shouted, "No running, no shouting and no talking," but many students ignored them and ran to the station.

"We will need these evacuation plans and skills sooner or later in case war breaks out, and I think war can happen any time," said Han Yoo-jin, 16.

In Paju, a city near the border with North Korea, dozens of residents ran to underground parking lots and donned gas masks in a drill against chemical, biological and radiological attacks. Rescue workers wearing gas masks and protective suits also brought residents pretending to be infected with chemical agents to ambulances.

The drills came amid stepped-up diplomatic moves by the United States and regional powers.

New Mexico Gov. Bill Richardson, on his way to visit North Korea, was scheduled to stop in Beijing on Thursday. Richardson has often acted as a diplomatic troubleshooter and has made regular visits to North Korea.

China has come under growing pressure from the United States and others to push ally North Korea to change its behavior. 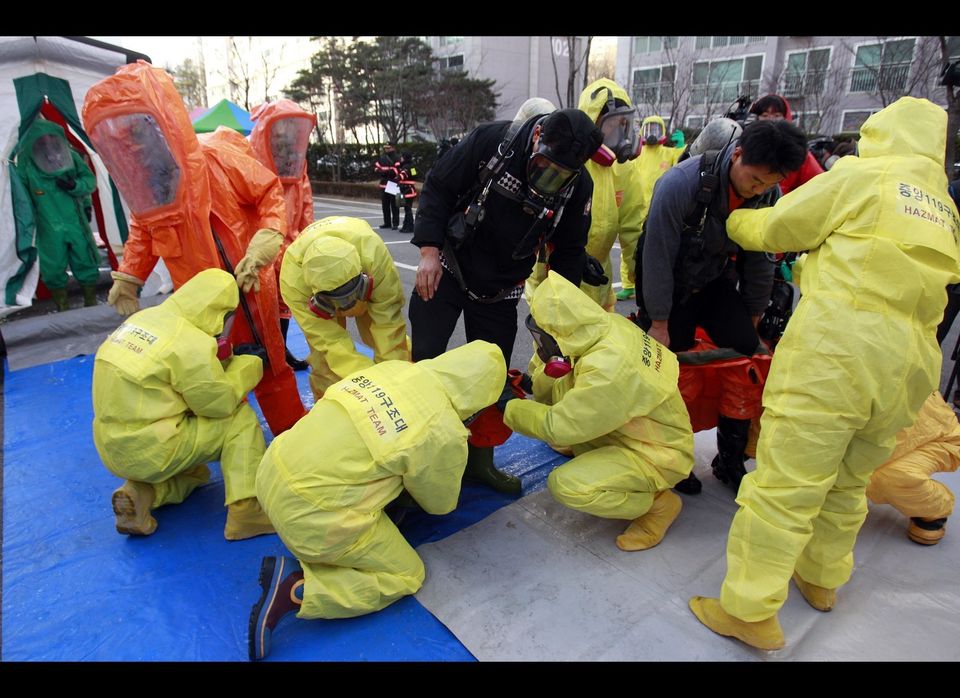