JUBA, South Sudan -- On a day when people should have been celebrating five years of South Sudan's independence, many were running for their lives.

Some 300 have been killed in explosions and large-scale exchanges of gunfire that began Friday, July 8, in South Sudan's capital of Juba. The violence, which coincided with this new nation's independence day, is igniting grim new fears that the world's youngest country may be sliding even deeper into civil war.

This latest violence is a major setback for the millions of South Sudanese people who have already suffered through three long years of war.

Many foreigners and aid workers are now being evacuated. At least 42,000 civilians, mostly women and children, were displaced from their homes at the height of last week's fighting. As gunfire broke out in the city, colleagues of mine texted me saying, "We are in danger here, I don't know what to do," and, "There is heavy shooting in our area. It is not safe." One staff member who is in her eighth month of pregnancy told me she thought she was about to deliver prematurely as the stress piled up with gunfire going off around her. Phone lines were overloaded, and when I was finally able to reach another colleague to confirm that he got home safely, he responded, "Yes, I did, but I passed three dead bodies on the way."

Other co-workers reported lying flat on the road as bullets whizzed above them indiscriminately. There has been widespread looting, and friends and peers have reported the shelling and gunfire even hit humanitarian compounds and killed two U.N. peacekeepers. At the compound where Mercy Corps works, we were locked in a room, sitting on the ground as we heard heavy shooting all around us. We felt explosions and could feel the window panes shake while we saw helicopter gunships circling over. 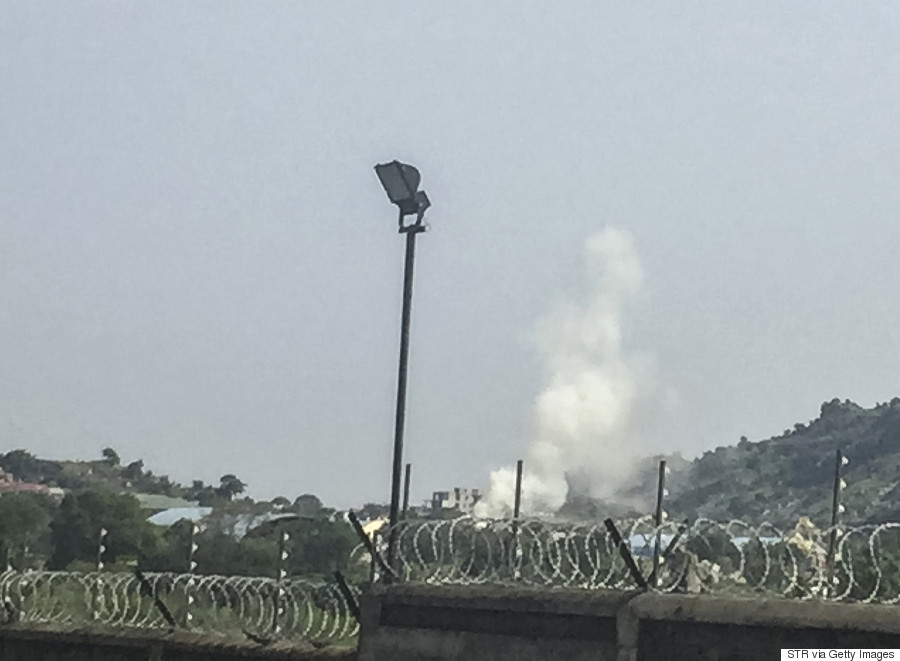 The fierce outburst in South Sudan is immensely discouraging for a hopeful country with such an energetic young population, and with an overwhelming desire to succeed. While the political situation here has always been tense, no one expected things to deteriorate this quickly.

Since 2013, about 2.3 million people across the country have been forced to flee their homes. In August 2015, the two sides signed a peace agreement, although both sides expressed reservations and the agreement has not yet been successfully enforced -- and the South Sudanese have yet to see the benefits.

Currently, the country faces the highest rate of inflation in the world and is in the midst of an economic crisis. Severe hunger looms for more than 6 million people across the country.

On more than a few occasions the conversation shifted to not 'when' but 'if peace comes.'

President Salva Kiir and his rival, Vice President Riek Machar, declared a cease-fire Monday. The declaration is largely holding thus far, but it is unclear if all armed parties will heed this call for calm in the long run. If this embattled country wants to keep hope alive for a lasting peace, it is imperative that this cease-fire holds and the bloodshed does not spread.

Despite this alarming violence in the capital, my team at Mercy Corps' work in South Sudan continues. All of our staff is safe and accounted for, but mounting tensions make everyone nervous. 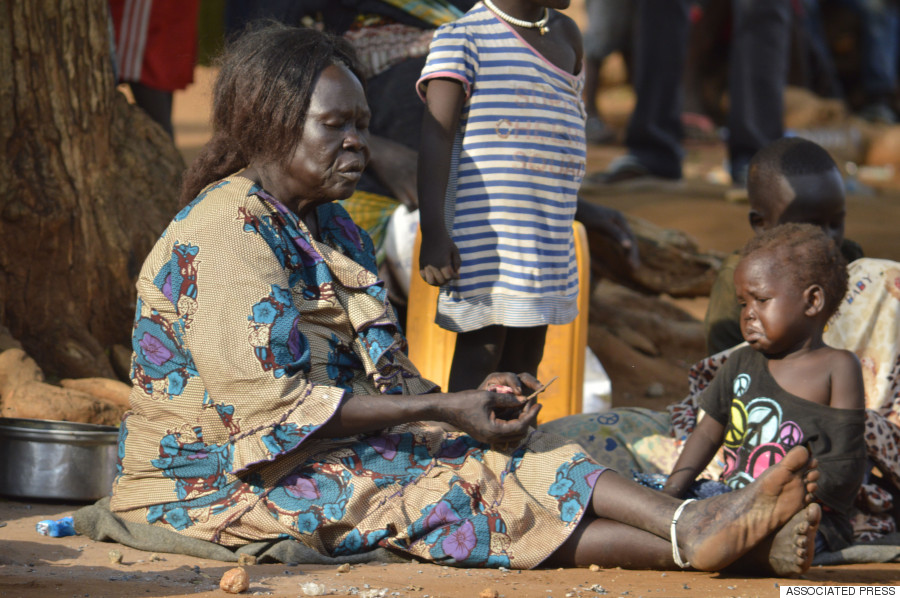 A woman sits with her child near a church in Juba, South Sudan as embassies and aid organizations evacuate staff. (AP Photo)

With thousands of newly displaced people in immediate need of health care, water and sanitation, and the rainy season increasing the chance of waterborne and infectious disease spreading, Juba is in need of assistance more than ever.

Organizations like ours are ready to help fulfill these urgent needs, but first we must ensure that this cease-fire survives, and that safe passage for humanitarian actors is guaranteed. Destruction and damage to humanitarian facilities is unacceptable and must stop.

Mercy Corps has worked in South Sudan since 1995. In addition to providing clean water and sanitation services and operating schools for children, we deliver essential supplies such as fishing and farm tools, and create jobs through cash-for-work projects such as dyke construction, designed to prevent flooding of farmland. These efforts go a long way toward securing a stronger future for the people of South Sudan, but this progress is now under grave threat.

The headlines will fade, but the needs will not.

On top of the conflict, the rainy season has made it markedly more difficult and expensive to transport commodities through much of the country. Some of our staff members -- almost all of whom are from South Sudan -- walk through waist-high water and hike hours to get supplies to families in need.

In Juba, several people in our team have had to flee their homes in the past few days and seek shelter with relatives or in churches. One member has been at her church since July 8 -- she went home only briefly to get food and then immediately returned to the church. This trend is becoming more and more necessary for many living around Juba.

A community needs assessment that we completed on July 14 found that while more civilians are moving throughout Juba, and shops are reopening as a result of the cease-fire, many people still find the atmosphere tense and worrying. One resident whose family's house has been damaged by shelling said, "We want to go home, but where is home now?" 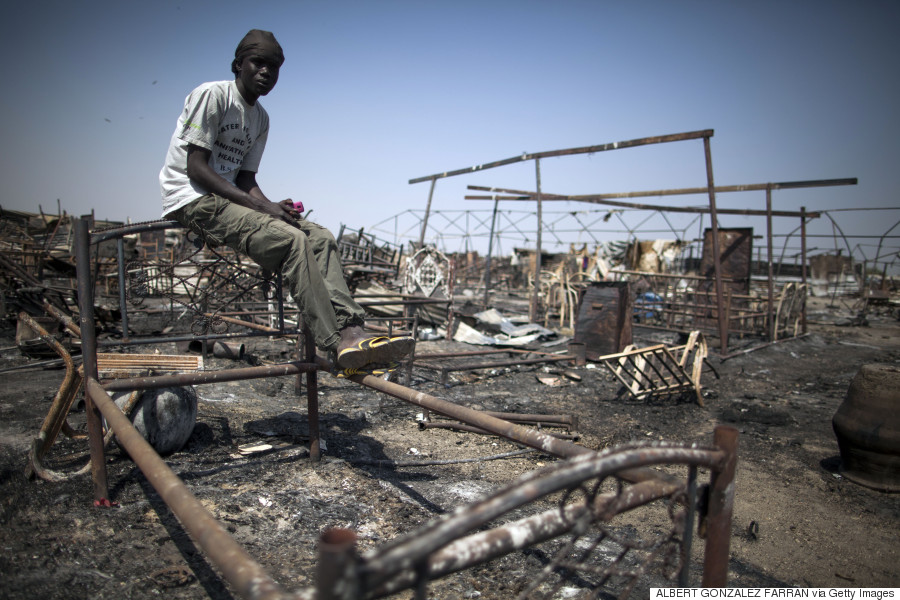 A displaced man in Malakal, South Sudan sits on his former bed in a burnt and looted area, on February 26, 2016. (ALBERT GONZALEZ FARRAN/AFP/Getty Images)

The South Sudanese are a resilient people who embrace life. I have long heard people here talk hopefully about what life will be like "when peace comes." This week, as the delicate cease-fire takes shape, our staff members report that shopkeepers are trying to reopen businesses, but in some places there is nothing left to sell. During the lead-up to this most recent round of violence, after so many delays and impediments in the implementation of the August 2015 peace deal in which tension grew, I noticed on more than a few occasions that the conversation had shifted to not "when" but "if peace comes."

We strongly urge all parties to uphold the truce so that this conflict may be brought to a quick and peaceful resolution. Bodies like the African Union and the Intergovernmental Authority for Development must take more robust action to back a cease-fire and hold all parties accountable.

The international community must sustain its interest in South Sudan. The headlines will fade, but the needs will not. South Sudan is a country on a precipice, and all of our help and attention is needed now, and in the months to come, if this new country is to realize its bright future.