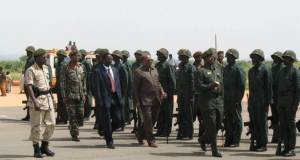 Al Jazeera's interview with President Omar al Bashir of Sudan just a couple of days before the South votes on secession is making headlines. In it he says that the South will face instability if it chooses independence from Khartoum.

"The south suffers from many problems. It's been at war since 1959. The south does not have the ability to provide for its citizens or create a state or authority."

This will no doubt excite the pro-breakaway American meddlers, who have long seen independence for the South as the first step to regime change in the North. They will, ironically, accuse Bashir of interfering in the Southern vote. But what has he really said? Only exactly the same thing as any analyst who understands the place will tell you. Without support, cash and expertise the South is a failed state in waiting. Africa is littered with countries where rebel movements have taken power only to rule as if they were still in the bush: through centralisation, patronage and an iron fist.

Let's hope the lessons of Ethopia, Eritrea and Uganda have been learned - just to cite a few countries in the region - and that South Sudan does not follow when it becomes the world's newest country.