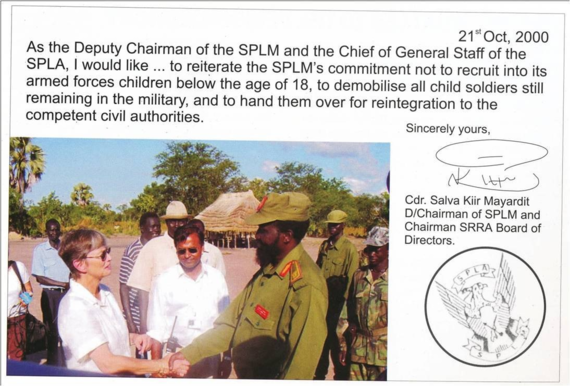 As 2013 draws to a close, the news filtering out of South Sudan is ominous and describes an increasingly dire situation. Starting in July 2013, a deep rift in the senior political leadership quickly ballooned into a violent ethnic and tribal conflict that threatens to walk -- no, run -- back all the steps taken forward by South Sudan, which is still in the nascence of statehood.

The Comprehensive Peace Agreement in 2005 ended the war between the North and the South, but little attention was paid to the inter-tribal rivalry within the South.

It suddenly feels like Harold Ramis's famous film, Ground Hog Day. I served with UNICEF in South Sudan from June 2000 to September 2001, bringing humanitarian and life-saving services to a war-torn, drought ridden and impoverished part of Africa which was aptly called 'Operation Life-Line Sudan'. South Sudan was in a secessionist war with the North but there was also a brutal internal war between the Sudan People's Liberation Movement (SPLM), led by John Garang and his Deputy Salva Kiir, (now President of South Sudan), and the Sudan People's Defense Force (SPDF), led by Riak Machar (the former Vice President of South Sudan). The tragedy of that internal war, I witnessed then, appears to have come back to haunt South Sudan, the world's youngest nation.

Ostensibly, the conflict is between President Salva Kiir Mayardit and his former Vice President Riek Machar (who was fired by the President in July) and their warring political ambitions; Kiir's allegations that Machar is orchestrating a coup is only one of the salvos in that conflict. The reality is that the present conflict is merely the symptom of a more fundamental schism in South Sudanese society. Traditional tribal rivalries and competition for resources is at the heart of the problem.

The political fracas has led to violent clashes between the Dinka tribe, of which President Kiir is a member, and the Nuer tribe, which the former Vice President Machar belongs to. Witnesses on the ground have reported extra-judicial killings, group arrests, the targeting of individuals based on their ethnicity, and even the finding of a mass grave. Some 80,000 civilians have been displaced since the fighting began less than two weeks ago and it is likely that the numbers will sharply rise in the coming days.

Fearing that the violence will lead to widespread chaos, many countries have ordered their nationals to evacuate from South Sudan. Many of the foreign nationals are aid workers, and their withdrawal will have a negative impact on the country and its already fragile people. Meanwhile, an extra 5,000 international troops from the United Nations are being sent into the country, to reinforce the present 6,000 troops already deployed, with hopes that their fortified presence will aid in quelling the violence.

The UN Secretary General Ban Ki-Moon has rightly emphasized, "There is no military solution to this conflict. This is a political crisis, which requires a peaceful political solution."

For the international community, as well as any specific countries that may be looking to intervene to prevent a further escalation of the violence or to protect their own interests in the country, it is important that they realize that the situation will not de-escalate by simply putting more 'boots on the ground'. The divisions between the Dinka and the Nuer go back decades and have been in a deep regional subculture of ethnic violence.

To prevent an internecine civil war from further escalating, it is essential that grassroots-level peace initiatives begin that focus less on the grievances each side carries and more on the potential for the two tribes to work together to build a new South Sudan. This is where the innovative work of organizations such as Nonviolent Peaceforce in unarmed civilian protection and violence deterrence may herald a worthwhile, appropriate and cost-effective approach to complement the strengthened UN military engagement.

At the same time, the international community has to commit its weight and resources to preventing bloodshed of civilians at the hands of armed militias, both government-controlled and rebel-run. They have to ensure that the leadership of both sides get an unequivocal message that they must proceed with prudence and maturity in resolving their differences and not violence.

Such a process is all the more imperative given the poverty in the country and its over-reliance on oil revenues, which will likely be hit hard due to the violence. A paper by Development Initiatives from 2012 shows that 98 percent of the South Sudan's revenue is derived from oil; at the same time 51 percent of the country's population, or the majority, lives below the poverty line. Expenditure and state investment on essential sectors such as health, education and agriculture remains minimal. Given this reality, South Sudan and the international community can ill-afford an all-out civil war breaking out.

For any lasting peace to be possible in South Sudan, it is essential that political consensus emerges from grassroots-level peace initiatives, coming out of ongoing local peace infrastructures, that take into account existing differences between various tribes as well as political factions.

Apart from the Dinka and Nuer, it is important to include all the tribal groups such as the Murle, Bari, Azande and Shilluk. Inclusivity of the different ethnic groups must be built into the process so as to ensure the sustainability of peace in the state.

The world need not look too far back to see what this violence in South Sudan could turn into. It has taken decades of work and the loss of millions of lives for African countries like Rwanda to recover from bloody civil wars. It is unconscionable that the people of South Sudan be left vulnerable to a similar fate.

Therefore while high-level interventions are much needed at present to resolve this crisis, the work to reconcile the various groups at the grassroots-level must start in earnest so as to prevent history from repeating itself yet again.

These are personal views of Siddharth Chatterjee. He is the Chief Diplomat at the International Federation of the Red Cross and Red Crescent Societies, IFRC. Follow him on twitter: @sidchat1