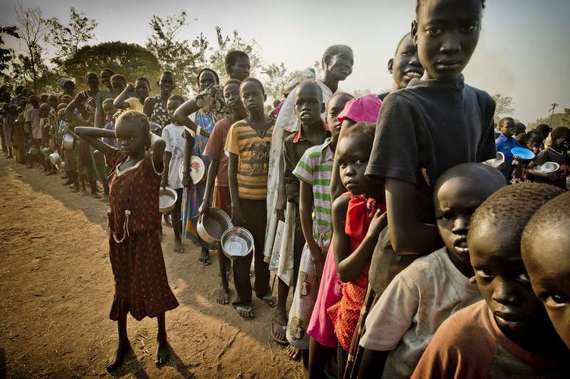 Three years ago, in July 2011, the world celebrated the birth of South Sudan, the world's newest nation. At a moment of great optimism, people of different ethnic groups and economic classes came together with the international community to celebrate the dream of a united, sovereign nation, and a new flag was raised in the capital, Juba. In December 2013, violence broke out as a result of a political struggle between the President and his former Deputy. One year on, the country is still mired in a conflict that has shattered the dream and threatened this young nation.

The fighting has taken a terrible toll on civilians, particularly women and children, who have borne the brunt of the violence. Both parties to the conflict have committed gross violations of human rights and international humanitarian law, including extrajudicial killings, enforced disappearances and sexual violence. These violations may, in some cases, constitute war crimes and crimes against humanity. Civilians have been deliberately targeted based on their ethnicity and perceived political affiliation. Since the outbreak of fighting, more than 10,000 people have been killed, 1.9 million displaced and millions more face food insecurity.

Sexual violence has become a key feature of the current conflict, including rape, gang rape, forced marriage and sexual slavery. These crimes have been committed by all parties to the conflict, both soldiers and civilians. As one female activist noted, "Sexual violence has become something normal here. It is not just about rape, it is to inflict unimaginable pain and destruction."

Children, who make up the majority of the population, have been disproportionately affected. Since December 2013, thousands of children have been recruited by both sides. There are also hundreds of documented cases of children who have been killed, maimed, raped or subjected to other forms of sexual violence.

The culture of impunity in South Sudan has contributed immensely to the current situation. If this young nation is to achieve lasting peace, it is vital to ensure that those responsible for crimes committed are held to account. The African Union Commission of Inquiry was charged with investigating the human rights violations and abuses that have taken place in South Sudan and with recommending accountability measures. The United Nations has supported the work of the Commission and hopes that its report will contribute to promoting justice and accountability in South Sudan.

There have been some positive signs. In June, the Government of South Sudan recommitted itself to an action plan to end the recruitment of children by the SPLA and protect children from the impact of war. In May, Riek Machar, the former deputy president and leader of the South Sudan People's Liberation Movement (SPLM/A in opposition) signed an agreement with the United Nations to protect children, including from recruitment. We are still waiting to see these commitments translated into actions that make a difference in children's lives.

In October, the Government signed a joint communiqué with the United Nations in which it agreed to concrete measures for the prevention of conflict-related sexual violence. We urge the SPLM/A in opposition to do the same and act now to help protect women and children from the horrible scourge of wartime rape.

Ultimately, this is a man-made conflict and the responsibility to protect its population lies with South Sudan's leaders. They need to commit to a comprehensive political settlement which is the only solution to the conflict. We in the international community also have a collective responsibility to ensure South Sudan fulfils its responsibilities, but the only way forward for this young nation is as a united country, at peace with itself. South Sudan can build a brighter future from the ashes of conflict, but that work must begin now. _________________
Zainab Hawa Bangura is the Special Representative of the Secretary-General on Sexual Violence in Conflict.

Adama Dieng is the Special Adviser of the Secretary-General on the Prevention of Genocide.

Jennifer Welsh is the Special Adviser of the Secretary-General on the Responsibility to Protect.

Leila Zerrougui is the Special Representative of the Secretary-General for Children and Armed Conflict.