BANGKOK, May 29 (Reuters) - Southeast Asian nations agreed on Friday to intensify search and rescue efforts to help vulnerable "boat people" stranded in the region's seas, as Myanmar said its navy had seized a vessel off its coast with more than 700 migrants aboard.

More than 4,000 migrants have landed in Indonesia, Malaysia, Thailand, Myanmar and Bangladesh since Thailand launched a crackdown on people-smuggling gangs this month. Around 2,000 may still be adrift in boats on the Andaman Sea and Bay of Bengal, the United Nations said.

Just as the meeting was wrapping up in Bangkok, Myanmar's Ministry of Information announced its navy had intercepted a boat with 727 "Bengalis" aboard and was taking them to a base on an island off its southern coast to determine their identity.

"That the summit took place at all with this wide participation is itself a good result," William Lacy Swing, director general of the International Organization for Migration (IOM), told Reuters.

"It's a very important first step. Having Myanmar there was key. I'm pretty optimistic. We're pleased that they've retained an emphasis on intensifying search and rescue operations."

While some of the migrants are Bangladeshis escaping poverty at home, many are members of Myanmar's 1.1 million Rohingya Muslim minority who live in apartheid-like conditions in the country's Rakhine state.

Myanmar does not consider the Rohingya citizens, rendering them effectively stateless, while denying it discriminates against them or that they are fleeing persecution. It does not call them Rohingya but refers to them as Bengalis, indicating they are from Bangladesh.

The final statement from the meeting on Friday included a paragraph that called for addressing factors in the areas of origin of migrants, including "promoting full respect for human rights" as well as investing in economic development. It did not mention Myanmar by name.

Myanmar signed off on the agreement, Htein Lin, director general at Myanmar's Ministry of Foreign Affairs and head of the country's delegation told Reuters after the meeting.

"It's not only about Rohingya, in your terms - in our terms, not only for Bengalis," he said.

"The language (in the document) speaks for itself. For Myanmar, root causes are development and a sense of security for all people living in Rakhine state and the rest of Myanmar."

In his opening remarks to the meeting earlier, he had sharp words for those that blamed Myanmar for Southeast Asia's migrant crisis.

"You cannot single out my country," he told delegates. "In the influx of migration, Myanmar is not the only country." 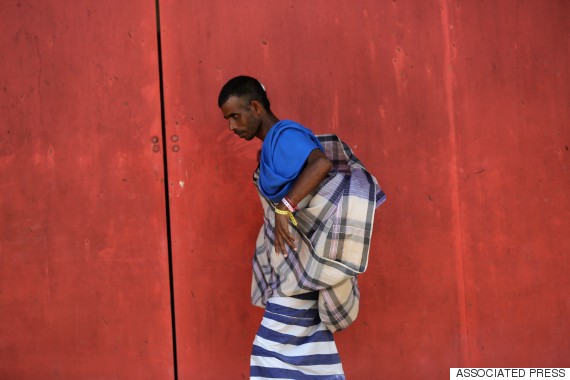 The Bangkok gathering brought together 17 countries from the Association of Southeast Asian Nations (ASEAN) and elsewhere in Asia, along with the United States, Switzerland and international bodies such as the UNHCR, the UN's refugee agency, and the IOM.

One delegate said Myanmar had pushed for other participants not to use the term "Rohingya" and that most were respecting Myanmar's request.

Htein Lin said nobody had raised "the Rohingya question."

Volker Turk, Assistant High Commissioner for Protection at the UNHCR, said earlier the deadly pattern of migration could only be ended if Myanmar addressed discrimination against its Rohingya minority.

"This is a very good beginning," Turk said after the meeting. "There is a strong paragraph on root causes in the agreement... There is a sense of opening from Myanmar that I welcome. There was a discussion about Rakhine State."

There were also pledges of money to help deal with the crisis from the United States, Australia and Japan. 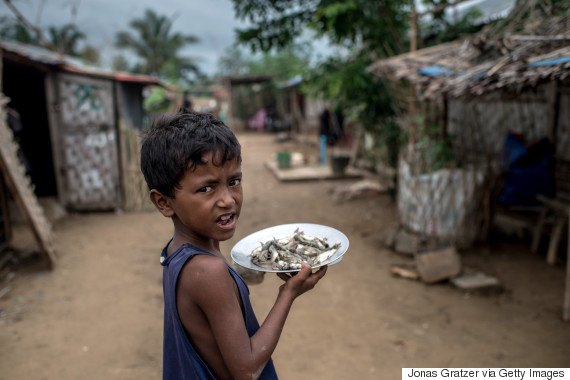 A young boy carrying plates of shrimp by one of the IDP camps, May 25, 2015 in Sittwe, Myanmar. (Jonas Gratzer/Getty Images)

Officially called the Special Meeting on Irregular Migration in the Indian Ocean, the gathering took place against the grim backdrop of Malaysia's discovery of nearly 140 graves at 28 suspected people smuggling camps strung along its northern border.

Thai authorities had found 36 bodies in abandoned camps on their side of the border at the start of this month, which led to the crackdown.

When the Thai crackdown made it too risky for traffickers to land migrants, they abandoned thousands at sea, triggering the crisis.

Regional governments have struggled to respond, although images of desperate people crammed aboard overloaded boats with little food or water prompted Indonesia and Malaysia to soften their initial reluctance to allow the migrants to come ashore.

Malaysia, which says it has already taken 120,000 illegal immigrants from Myanmar, and Indonesia said last week they would give temporary shelter to those migrants already at sea, but that the international community must shoulder the burden of resettling them.

Thailand has refused to allow the boats to land, saying it is already sheltering more than 100,000 migrants from Myanmar, but has deployed a naval task force to offer medical aid at sea.

Thailand said on Friday it had given the United States permission to fly surveillance flights over Thai airspace to identify boats carrying migrants.

"We have to save lives urgently," U.S. Assistant Secretary of State Anne Richard told reporters before the meeting. U.S. air missions were already operating from bases in Malaysia, she said.